Red card or fair play? Ambush marketing back in the news as FIFA World Cup kicks off

Ambush marketing can be an impactful, but legally risky, advertising strategy.

Businesses that are the subject of, or otherwise engaging in, ambush marketing should consider potential infringement of the target brand’s intellectual property rights. Advertisements that capitalise on the reputation of another brand or event can raise issues of trade mark and copyright infringement, as well as issues pursuant to Australian consumer law and should be analysed closely by both target brands and those doing the ambushing.

Ambush marketing strategies leverage off a target company’s reputation in a brand or event, and so carry the risk of infringement of intellectual property rights or breaches of consumer law protections.

The nature of the use of a target brand’s logos, word marks or other ‘get-up’ will be critical in assessing whether the ambush marketing has strayed into trade mark or copyright infringement territory. This includes considering whether such use is for the purpose of identifying the target company as the subject of criticism.

Where representations made in advertising are intended to disassociate the marketer from the target brand, rightsholders may have difficulties in pursuing claims of misleading and deceptive conduct or false and misleading representation under Australian Consumer Law (ACL). Claims of trade mark infringement, which require trade mark use (i.e. use to indicate the origin of goods/services), may also be problematic.

Ultimately, the success of any claim will depend on the advertisement in question and the context in which the target brand is used.

Ambush marketing – a case study in the FIFA World Cup

Ambush marketing is a term generally used to refer to marketing strategies that involve capitalising on the exposure offered by another company’s event or status. Recent, well-publicised examples have arisen out of the Federation Internationale de Football Association (FIFA) World Cup. As one of the most-watched sporting events in the world, the FIFA World Cup generates significant marketing activity. In 2018, for example, Paddy Power ran a campaign with the slogan “From Russia with Equal Love: Why we’re making accidental allies of the World Cup home nation”, where the company donated £10,000 to LGBT+ charities for every goal the Russian national team scored, protesting against anti-LGBT+ sentiment in Russia. There have also been various in-person ambush marketing campaigns run at past editions of the tournament, including several notorious stunts organised by Bavaria Beer to the detriment of official drinks sponsor Budweiser.

Possibly the boldest example to date is BrewDog, a UK brewing company with operations in Australia. For the 2022 World Cup, the company launched an “anti-sponsorship” campaign featuring taglines such as “Proud Anti-Sponsor of The World F*Cup”, “The Beautiful GShame” and “Eat, Sleep, Breathe Bribe Football”, along with various other strong statements on its website voicing its protest. It is notable that FIFA has registered trade marks for “FIFA”, “World Cup”, as well as other related word marks and logos.

Ambush marketing inherently involves capitalising on the reputation and consumer reach offered by a popular event or brand. This type of advertising raises considerations regarding the protection of any intellectual property rights of the target company, particularly trade marks and copyright, as well as protections afforded by consumer law. 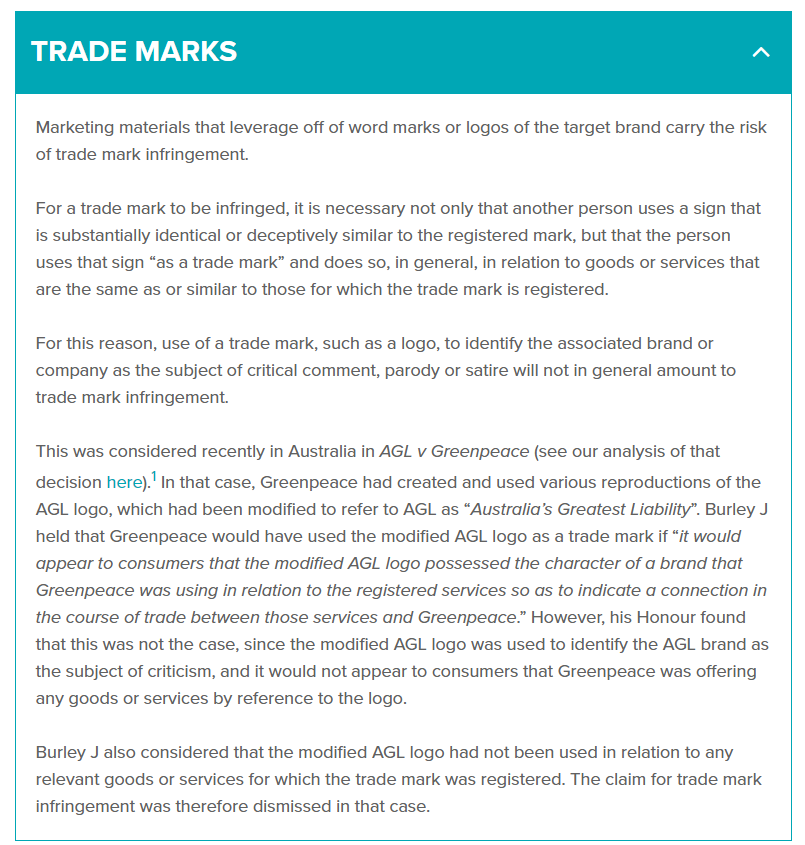 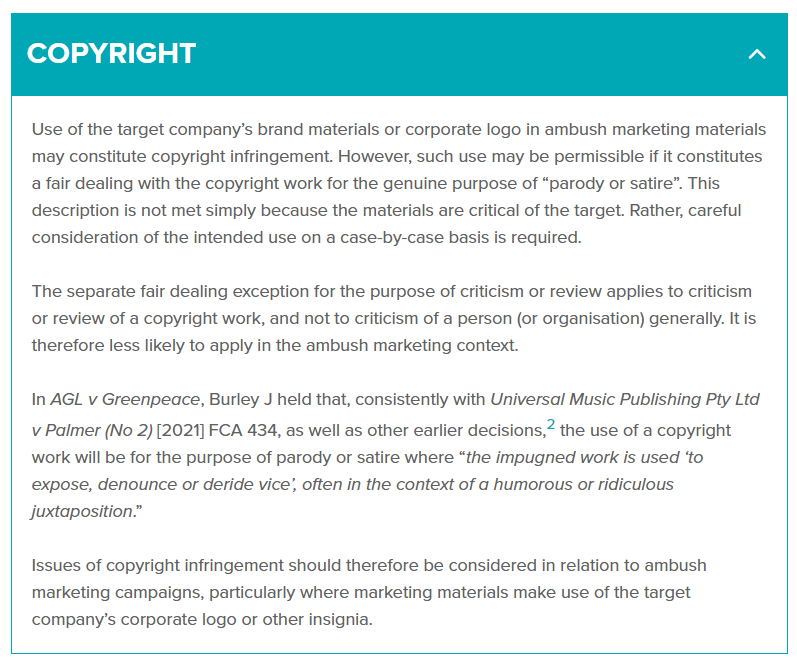 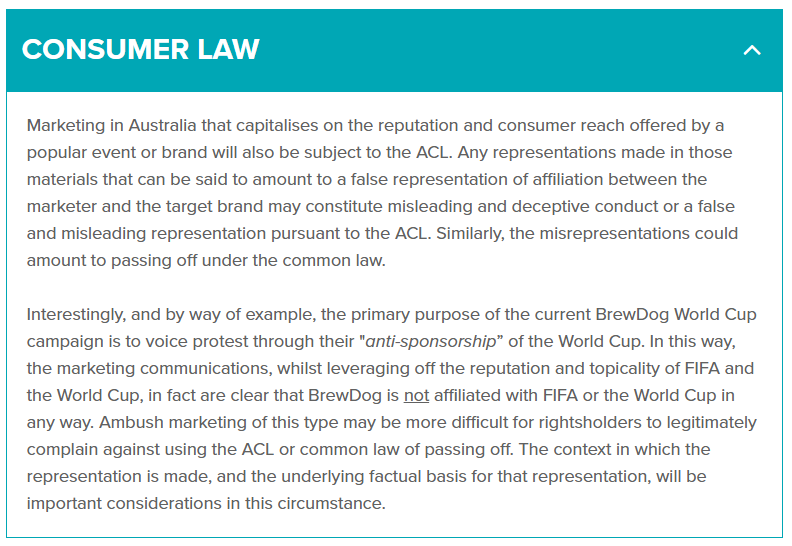 The risk of infringement of intellectual property rights or breaches of consumer law protections by a publisher of ambush marketing materials will depend on the advertisement in question and the context in which the target brand is used.

For campaigns of protest and the like where the purpose of the representation in the advertisement is to in fact disassociate the marketer from the target brand, there may be particular difficulties for rightsholders in enforcing their rights, for example, in relation to claims under Australian consumer law. Ambush marketing materials should be analysed closely by both target brands and those doing the ambushing