On 11 November, the UK Government introduced to Parliament the long-awaited National Security and Investment Bill. The Bill, which is expected to be enacted in Spring 2020, is a transformative event for investors in UK businesses and assets, proposing sweeping new powers for Government to scrutinise and intervene in a wide range of transactions on the basis of UK national security. Here we set out the key elements of the regime and what it means for parties looking to invest in businesses and assets with a UK nexus.

The key elements of the proposed regime

The new regime will:

The Government proposes that parts of the legislation will have retro-active effect. As such, transactions and commercial arrangements entered into from the 12 November 2020 have the potential to be “called in” (after the legislation is adopted) for review by the Government on national security grounds. Assessment of the implications of the Bill is now a necessary step in evaluation of structure and timetable in all transactions which touch the UK, in particular where critical sectors or cross-border aspects are involved.

This UK reform, in introducing a stand-alone regime for screening of investment in UK businesses and assets on national security grounds in many respects represents the UK “catching up” with most major economies globally. However, there are a number of striking aspects of the Bill, which in a number of critical regards go beyond earlier consultation drafts and a number of peer regimes.

As set out below, the scope of the 17 Key Sectors to which the mandatory notification regime applies is broad, covering large swathes of the UK economy: 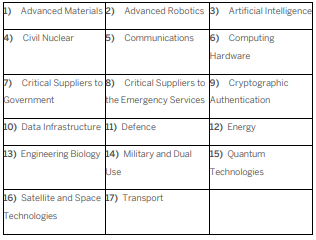 Over the past two years, the Government has introduced stop‑gap reforms to enable “own‑initiative” intervention on national security grounds on wider categories of deals before the Competition and Markets Authority (CMA) in the military, dual‑use, CPU, quantum technology, AI, advanced materials and cryptographic authentication sectors. However, the new National Security & Investment regime, entailing wide sector coverage and mandatory notifications straight to government, amounts to a wholesale change rather than an evolution of the previous regime.

The Government is consulting on the precise definition of the Key Sectors (and therefore the limit of the mandatory notification regime) until 6 January 2021. Do get in touch if you would like engage with us on the consultation.

The jurisdictional reach of the regime is broad. The notification obligation extends to acquisitions in respect of non‑UK entities that carry on activities in the UK, and the call‑in powers yet further to entities that merely supply goods or services to the UK.

The call-in powers and voluntary notification regime (which complement the mandatory notifications for share acquisitions) extend to all sectors and to a very broad range of transactions beyond share acquisitions. These “trigger events” include any acquisition of “material influence”, asset acquisitions, as well as commercial arrangements that grant parties increased rights to control or make use of assets (broadly defined) that may give rise to a risk to national security. As such, for example, leases and land agreements, license agreements for technology and industrial partnership arrangements may all be called-in where national security issues may arise (for example in respect of a lease of land which overlooks a sensitive location, or in respect of technology cooperation which may enable a hostile actor to identify and exploit any vulnerabilities in critical infrastructure). The Government also proposes to give itself the power to extend the mandatory regime to cover asset acquisition and other trigger events by secondary legislation.

The Government projects that between 1,000 and 1,800 notifications will be made to BEIS annually. At the top of the range for estimated notifications, this is around 30 times more transactions per year than are subject to Phase 1 competition review by the UK CMA.

It remains to be seen whether amendments will be made as the Bill passes through Parliament over the coming months. At consultation stage, material concerns were expressed (and indeed put forward in BCLP’s response to the consultation) as to the breadth of the regime, and whether the powers may be used to take decisions on transactions based on broader political aims beyond national security. The proposed legislation, however, limits the Secretary of State’s powers to make remedial orders (including transaction prohibition) to those circumstances where “a risk to national security” may arise, and where he or she “reasonably considers that the [intervention] is necessary and proportionate” to prevent, remedy or mitigate the risk.

The Bill is accompanied by a Statement of Policy Intent which recognises these concerns, and notes expressly that the Government expects to intervene very rarely and on an exceptional basis in transactions outside of the Key Sectors. Similarly, the Government states that mere nationality or relationship with a foreign state on the part of an acquirer will not of itself render call-in more likely. Indeed, the Government notes that sovereign wealth funds will often have full operational independence, and as such raise no national security risks. Hostility to the UK on the part of acquirers (or there being hostile actors to whom the acquirers owe allegiances) will be an important factor in the Government review. The Government’s impact assessment estimates that around 70 to 95 transactions per year will progress to full substantive review (from the large set of notified and non-notified transactions), with around 10 transactions being subject to remedial orders or prohibition. As with all new regimes, we wait to see how the Government’s new powers will be exercised in practice, as well as the level of transparency provided in the decisions and Parliamentary reports envisaged by Government. The invitation for early, informal and confidential discussions with BEIS on specific transactions is welcome.

Government decisions under the regime will be capable of judicial review.

For mandatory notifications of share acquisitions (following adoption of the Bill next year), closing an acquisition without obtaining prior approval amounts to a civil and criminal offence. Acquirers are subject to material financial sanctions (up to the higher of 5% of global turnover or GBP 10 million) for non-compliance, and individuals potentially subject to imprisonment. Non-notified transactions are also deemed void, and may be subject to remedies, including potentially, unwinding. There are limited circumstances where the Government may validate closing of a transaction which has occurred without notification/clearance. As such, UK National Security & Investment approval is likely to become a common condition to transaction closing. Indeed, multi-jurisdictional review of the application of foreign investment approval regimes in the UK and elsewhere should be undertaken customarily for proposed acquisitions – especially in light of the burgeoning reforms, broad reach, and common absence of de minimis thresholds in similar regimes globally (for details of the EU’s new foreign direct investment screening regulations, which came into force on 11 October 2020, see our briefing here).

Following notification of a proposed acquisition (which the Government has confirmed will require considerably less information to be provided than a merger filing to the CMA), the Government will have a 30-day initial screening period to determine whether or not to “call-in” the acquisition - i.e., to open a “National Security Assessment”). If the Government does decide to open a National Security Assessment, it will have a further 30 days (extendable by a further 45 days) to reach its decision as to whether to approve the transaction, require any remedies or prohibit the transaction.

Outside of the mandatory notification regime, the Government will have a five-year period during which time it can call in for review a non-notified transaction – including transactions entered into after 12 November 2020! This long period of potential review may itself be a reason for parties to seek timely “closure” through voluntary notification. The Government welcomes informal engagement from now in those instances where the parties are unclear as to whether or not to make a voluntary notification.

The UK National Security & Investment regime will run in parallel to the UK merger control regime. Readers will also be aware that as of 1 January 2021, UK merger control review will operate outside the “one-stop shop” of the EU Merger Regulation. Transaction parties will need to take into account whether parallel UK merger control and national security review may be required in addition to any merger control notifications within the EU.