The Bill aims for greater community involvement in natural resource management and the recognition of climate change impacts on the environment.

On 20 March 2019, the Marshall Government introduced into parliament the Landscape South Australia Bill 2019 (LSA) which, if passed, will repeal the Natural Resources Management Act 2004 (NRM). The Bill aims to “support and enhance the ecologically sustainable development of the natural resources that make up or contribute to our State's landscape in an integrated manner” by creating a new framework based on:

The LSA Bill, if passed, is touted as being less process oriented, more flexible, reducing red tape and having a focus on delivery through partnerships while recognising that that climate change is a “significant factor in our environment”. The existing eight Natural Resource Boards will be replaced with nine Landscape Management Regions each with a Regional Landscape Board (RLB) which will aim to increase community and landholder engagement for each of the nine regions. The Adelaide Mt Lofty Ranges NRM board will be abolished with the area being covered by the new Green Adelaide region. Two new RLB’s will be created, Hills and Fleurieu and Plains and Valleys. It is proposed that boundaries will remain largely unchanged with the Adelaide regions not yet drawn. A map of the proposed regions is below: 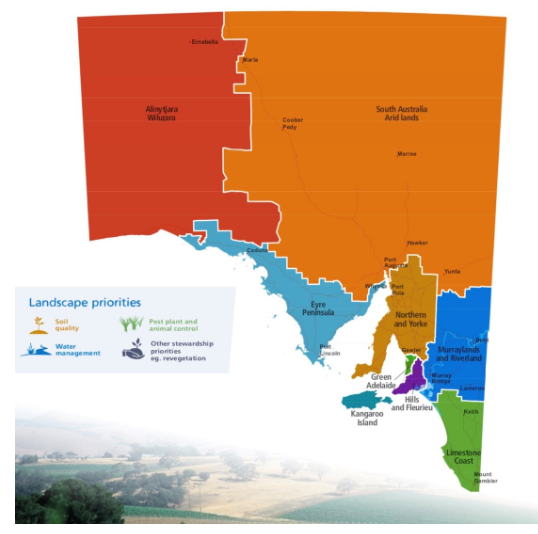 Each RLB will develop a five-year landscape plan identifying their top five priorities and consist of five to nine members, four of whom are appointed by the Minister and three by eligible electors (to be defined in the regulations), with the exception of the Green Adelaide Board (GAB).

Under section 12, Green Adelaide or Green Adelaide Region will be established as a landscape management region covering metropolitan Adelaide and will raise levies like other RLB’s to support residents to live more sustainably and invest in community development. Section 13(5) establishes the GAB with the aim of making metropolitan Adelaide the “most ecologically vibrant city in the world”. Given its strategic importance to the State, GAB will consist of between six to ten members who will be appointed by the Minister and supported by the Department for Environment and Water. The GAB will, in effect, delegate its regulatory functions to other Government agencies, Councils, boards and private organisations.

GAB will have seven priorities.

A separate discussion paper on Green Adelaide is being prepared and as always, the devil will be in the detail.

Under section 42, a State Landscape Strategy (SLS) will be prepared which will set the long term vision for managing the State’s landscapes and natural resources and will support an “effective and adaptive planning cycle for landscape management with a particular emphasis on establishing links and alignment between State and regional planning”. It will also set principles for the Landscape Priorities Fund, identify outcomes to be achieved by the SLS and address any other matters under the Act or regulations.

A state wide Landscape Priorities Fund is proposed under section 92 for large scale restoration projects. The fund will:

Under section 26 a Grassroots Grants Program must be established by each RLB to support individuals, volunteers, community and non- for profit groups to access funds to undertake work. The funds available for the program will be determined annually by the Minister.

If passed, the transition provisions will see the NRM arrangements maintained, unchanged for 2019 with the Department of Environment and Water supporting the transition.

Whether the aim of a more simplified system where water, pest, plant, animal, soil and land control is more efficiently managed by encouraging “more on-ground action so regional communities can become more actively involved in natural resources management programs and initiatives” is achieved remains to be seen, particularly when you consider that the proposed simplification actually sees an increase o13 sections and an additional schedule added to the LSA Bill.