On January 7, 2019, the United States Patent and Trademark Office (“USPTO”) released its 2019 Revised Patent Subject Matter Eligibility Guidance (“Guidance”), which revises the procedures for determining whether a patent claim is directed towards a judicial exception. Based upon post-Alice Federal Circuit decisions, the Guidance modifies the grouping of abstract ideas, and adds an intermediate step to determine whether a judicial exception is integrated into a practical application of the judicial exception. The flowchart below illustrates this new procedure.

To demonstrate these changes, the USPTO also published six new examples of how this analysis is performed on a variety of computer-related claims. This article reviews Example 40, titled “Adaptive Monitoring of Network Traffic Data,” which provides several sample claim sets that optimize network performance by adjusting the amount of data collected during the monitoring of network events. The claims rely on the NetFlow network visibility protocol, where IP network traffic statistics are generated and exported to a NetFlow collector for further analysis. However, such NetFlow records can be large and require significant network resources to transmit and process, and may even be unnecessary in some situations. The invention provides a technical improvement by collecting and exporting these NetFlow records only when abnormal network conditions have been detected, such as where certain network quality parameters exceed a predefined quality threshold. The first example claim recites:

A method for adaptive monitoring of traffic data through a network appliance connected between computing devices in a network, the method comprising:

comparing, by the network appliance, at least one of the collected traffic data to a predefined threshold; and

Since the claim recites a method comprising a series of steps, the claim is a process, and thus falls within a statutory category under Step 1. Under Step 2A, Prong One, the process is merely performed by “a network appliance,” which is a generic computer component. Putting this feature aside, the method steps could be performed as a “mental process;” hence, the claim recites a judicial exception, and the analysis continues to new Step 2A, Prong Two. While the two “collecting” steps could be considered as mere pre- or post-solution activity, the claim, as a whole, is directed towards a particular improvement in the technical field of collecting network traffic data, which is similar to the analysis following the Berkheimer decision. As discussed above, the claim only collects NetFlow protocol data when abnormal network conditions exist. As a result, the claim avoids unnecessary network traffic and improves the overall network performance, leading to the judicial exception being deemed as “integrated into a practical application.” By satisfying this new determination at Step 2A, Prong Two, the claim is determined to recite patent-eligible subject matter, and no analysis under Step 2B is necessary.

In a slight variation of the claim, the Guidance provides a second example where the second collecting step has been deleted, removing the features of the predefined threshold and NetFlow protocol data:

A method for monitoring of traffic data through a network appliance connected between computing devices in a network, the method comprising:

comparing, by the network appliance, at least one of the collected traffic data to a predefined threshold.

In this amended claim, the analysis under Steps 1 and 2A, Prong One, remains the same. However, the claim now recites a single collecting step performed by the same generic network appliance. The claim recites a general means for gathering network traffic data, which may be considered as insignificant extra-solution activity. As noted above, the network appliance is recited at a high level of generality, and simply places the claim into a computer environment. Since the claim recites nothing more than mere instructions using a generic computer component to apply the judicial exception, the claim is not integrated into a practical application of the judicial exception, and the analysis moves on to Step 2B.

Under the new Guidance, a finding of insignificant extra-solution activity under Step 2A, Prong Two, should be reevaluated under Step 2B. As noted above, the gathering of network traffic data was found to be insignificant extra-solution activity in Step 2A, Prong Two. The summary of the invention provided above does not suggest that the network appliance is anything more than a generic, off-the-shelf computer component. Furthermore, prior court decisions have found that the mere collection and receipt of network data is well-understood, routine, and conventional activity when performed in a generic manner. Thus, the claim does not recite an inventive concept, and is not patent-eligible subject matter. 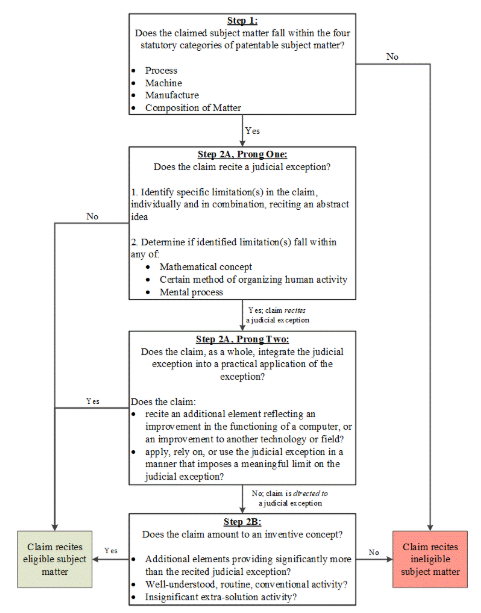