Van Cleef & Arpels is a French luxury jewelry company. Of all the jewelry motifs created by them, perhaps the most widely acknowledged and emblematic is the Alhambra, which was first unveiled in 1968.

The Alhambra is a talismanic design inspired by the four-leaf clover and reminiscent of traditional Moorish quatrefoil (a framework pattern consisting of four overlapping circles). The four-leaf clover Alhambra jewelry collection established itself as a timeless symbol of luck.

On April 2, 2018, a natural person BI Qingyu filed an invalidation against the abovementioned 3D trademark based on lacking distinctiveness in accordance with Article 11.1(3) of the 2013 Trademark Law. After reviewing, it was declared for invalidation.

Because the CNIPA (prior TRAB) deem the mentioned 3D trademark is not easy to be recognized as a trademark by the public and cannot play the role of distinguishing products. Furthermore, the evidence provided by Van Cleef & Arpels is insufficient to prove its acquired distinctiveness.

Van Cleef & Arpels appealed to the Beijing IP Court. The focus of the first instance is still around the distinctiveness of 3D trademark. The Court decide to support the CNIPA and deem:

How to review 3D Trademark distinctiveness

Van Cleef & Arpels’ "four-leaf clover" jewelry is quite famous in China but it is still rejected as a 3D trademark during the aforesaid invalidation and the first instance of the on-going lawsuit.

Then, how to create 3D Trademarks of distinctiveness?

The answer lies in two aspects: 1) making sure that the trademark pattern itself is distinctive in nature; 2) If not, collecting sufficient evidence to prove its acquired distinctiveness.

It is not easy for applicants to meet the requirements of trademark distinctiveness when designing the 3D trademark. To make it clear to understand, we can look it from the perspective of ordinary consumers.

When we see a certain package or 3D character, we can instantly associate to its provider without carefully identifying the word, graphics and other “trademark elements”.

In this regard, the previous package or 3D character assumes the role of distinguishing the source of product, and thus has the distinctiveness in the sense of a trademark. In the example below, the 3D trademark on the left is rejected, while the one on the right is registered. 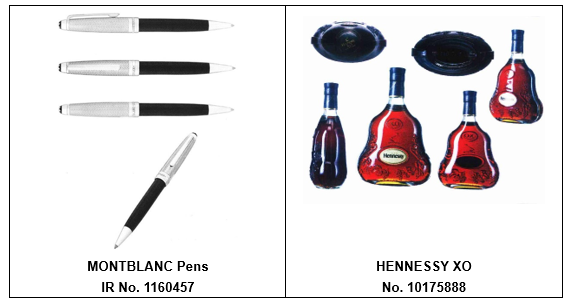 Furthermore, to avoid overlap with Design rights, the examination on the distinctiveness of 3D Trademarks tends to be stricter than 2D trademarks. It does not only require the pattern to be distinctive in nature, but also requires the relative public to take the pattern as a sign indicating source of products.

If the relative public takes the pattern merely as (part of) the shape of the products rather than a trademark, the pattern cannot play the role of distinguishing products and thus will not be deemed as Trademark Use.

Such point has been stipulated in Article 9 of Provisions of the Supreme People's Court on Several Issues concerning the Trial of Administrative Cases Involving Trademark Right issued in 2017:

The sole creation or the earliest use of such shape by the applicant cannot be definitely identified as the existence of conspicuous features as a trademark.

However, lacking distinctiveness in nature does not mean absolute impossibility in obtaining a registered 3D Trademark.

If the Applicant has sufficient evidence to prove its acquired distinctiveness through use, it can be registered later.

For example, the superstar in Chocolate world, Ferrero Rocher: its golden-wrapped chocolate as 3D trademark is finally registered in China (IR No. 783985) by FERRERO S.p.A. after rejection appeal.

Anyway, Van Cleef & Arpels also has different design patents granted in China, including the Alhambra series. Therefore, if the lawsuit loses finally, it won’t cause a big storm for the brand within the life of those design patents.

In addition, from the consumer perspective, I believe, for many jewelry lovers, the classic four-leaf clover design is still the instantly recognizable symbol of Van Cleef & Arpels and the message of good fortune at its heart.

As said by Jacques Arpels - the designer of four-leaf clover Alhambra jewelry collection - “To be lucky you have to believe in luck”. Which is why good luck symbols and charms have been at the heart of many Van Cleef & Arpels creations since the 1920's.

The invalidation against No. 15736970 is still pending in the second instance. Hoping the four-leaf will bring the luck to the brand this time as usual ;-)