The UK's investment screening regime is coming - What should businesses be doing now?

The UK Government has published its response to the consultation on the sectors that will be subject to a mandatory notification regime under the National Security and Investment Bill (the "Bill").

As set out in more detail in our alert of 18 November 2020, the Bill proposes to create a domestic investment screening regime in the UK comprising:

Notably, the call-in right will apply retrospectively with effect from 12 November 2020. If the Bill is passed in its current form, it will also - under the mandatory regime - become a criminal offence to complete a transaction without first obtaining approval from the Secretary of State for Business, Energy & Industrial Strategy (currently Kwasi Kwarteng). Businesses could also be fined the higher of £10 million or 5% of their worldwide turnover.

This alert sets out an important reminder of what businesses need to be considering now in the context of this new screening regime; particularly in light of its retrospective nature.

As a result of concerns and suggestions made by businesses and investors during the consultation, the Government has narrowed the definitions of the acquisitions within the sectors proposed as within scope of the mandatory regime.

Figure 1 (below) sets out the sectors upon which the Government based its consultation.

Businesses considering transactions concerning entities active in these sectors should be aware that these transactions are likely to fall within the ambit of the mandatory notification regime. Further details on the process for notification are expected to be published in the form of regulations following the passage of the Bill into law, with the Bill requiring that notifications are made in a prescribed format.

In the absence of details on the process for submitting mandatory notifications to the Investment and Security Unit (the new Government body that will be responsible for undertaking national security screening), we consider below the practical steps that businesses can take now to ensure they appropriately manage the potential risks arising under this new regime.

What does this mean for potential investors?

The ambit of the proposed investment screening regime is broad; it applies where a trigger event occurs i.e. where the Secretary of State reasonably suspects that there is - or could be - a risk to national security resulting from the acquisition of control.

Businesses that complete a transaction subject to the mandatory regime without prior approval risk fines of up to £10 million or 5% of their worldwide turnover, including any business owned or controlled by the business (whichever is higher). There is also the risk of potential imprisonment for individual acquirers, or where the acquirer is a company, partnership or unincorporated association, the "officers" of that body corporate (for up to 12 months on summary conviction or up to five years if convicted on indictment).[1] Transactions could also be unwound.

In view of the retrospective nature of the regime and the significant consequences of failure to notify a transaction, investors should already be self-assessing whether their transactions may be caught by the UK's proposed investment screening regime.

To assist businesses in their self-assessment exercise, we have set out in Figure 2 the steps that businesses should be taking to determine whether their transaction is at risk of falling within the ambit of the proposed regime. Figure 3 also sets out the Secretary of State review process. Investors should also note that until the Bill enters into law, the Secretary of State for BEIS would continue to be able to intervene on national security grounds under the extant provisions of the UK merger control regime.

Although an established voluntary notification mechanism exists under the UK merger control regime, the Government has not yet established any notification regime under the Bill. The Bill provides that the Government may introduce new regulations that prescribe the form and content of any notice and may reject any notice that does not meet the requirements prescribed by the regulations.[2]

What happens in the interim?

Absent a notification mechanism, the Government has encouraged businesses whose transactions may be caught within the ambit of the new regime to contact [email protected] for "informal guidance".

While the Government has not published formal guidance as to how to undertake the self-assessment exercise, the Government welcomes early engagement from investors and businesses and invites them to review the "statement of policy intent".

When deciding whether to exercise its "call-in" right, the Secretary of State must have regard to the statement of policy intent. The Statement of Intent identifies three types of risk:

The Government has also published a series of fact sheets, which provide further information about each of the provisions in the Bill.

However, there continues to be uncertainty as to how 'trigger happy' the Government will be in the exercise of its "call-in" right.

In view of the retrospective application of the Secretary of State's review right, parties involved in transactions now need to be considering whether they may be caught by the new screening regime when the Bill is enacted.

From a practical perspective, businesses should carefully plan their transactions and apportion risk by appropriately allocating responsibility within any transaction documents, especially if they operate within the proposed scope of the mandatory regime.

The Government has recently released a 'fact sheet' on how the Investment Security Unit will review notifications. Ahead of the Bill's passage into law, businesses should consider: 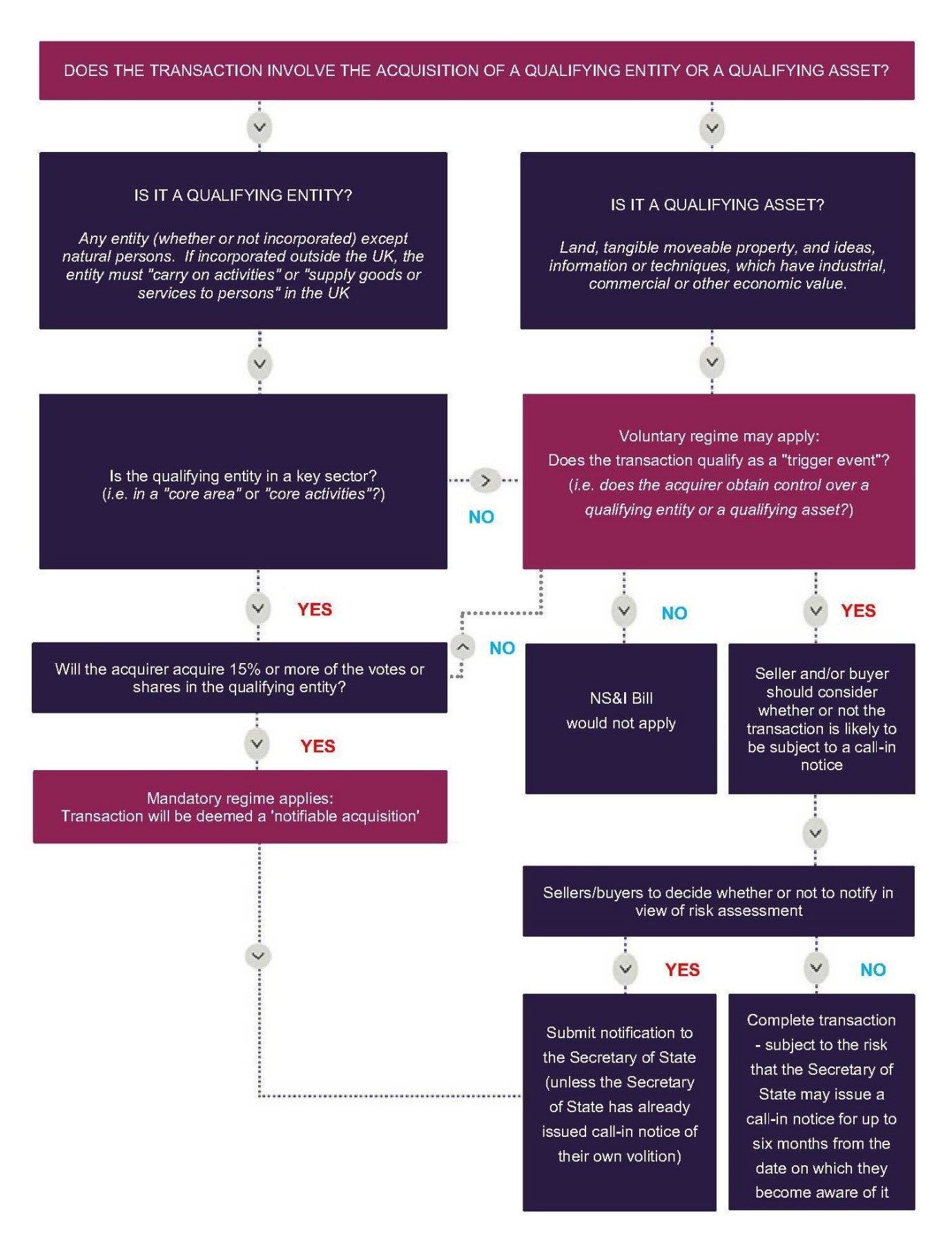 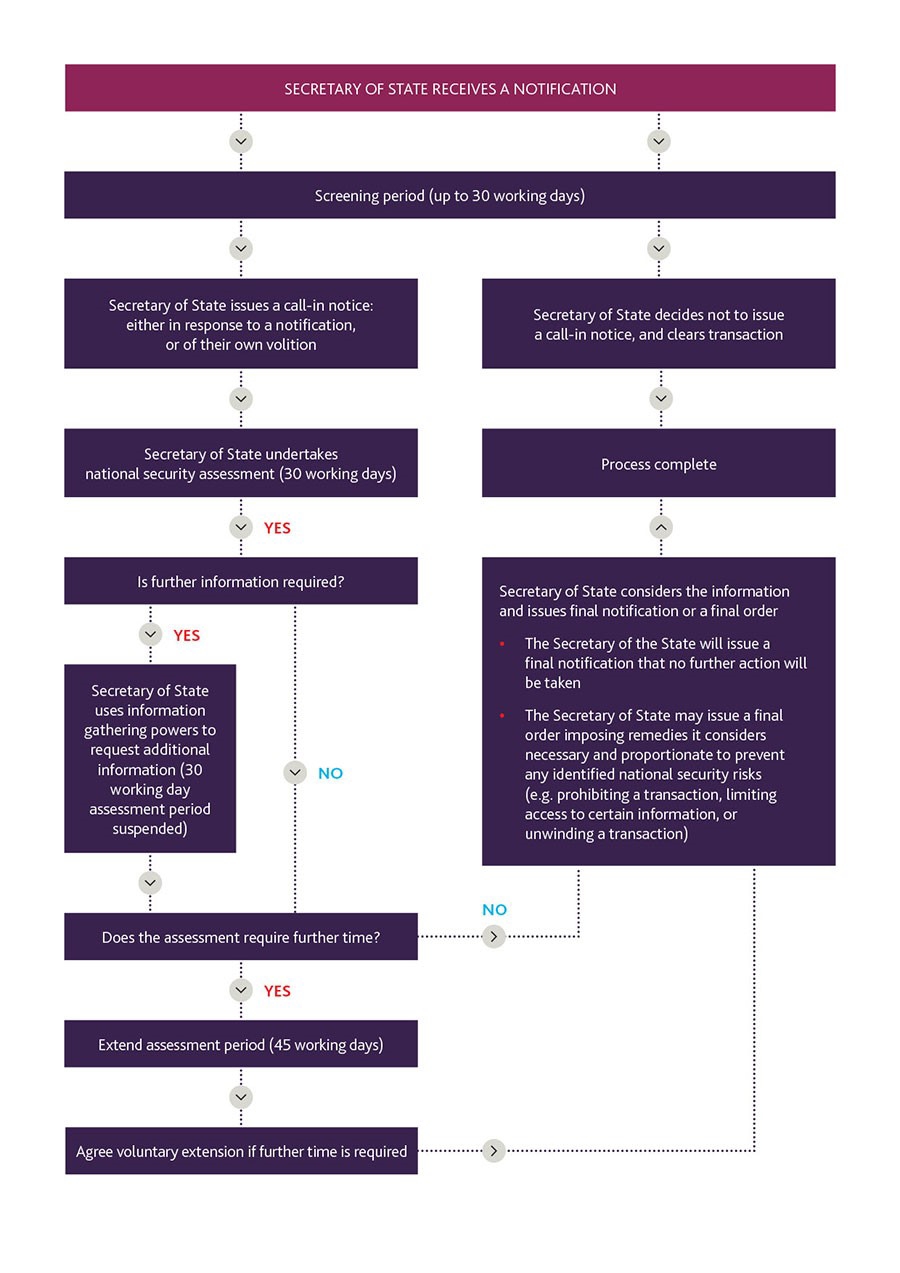