Progress and Potential: A profile of women inventors on US patents, a report recently published by the Office of the Chief Economist of the USPTO, analyses the American women inventors named on US patents granted between 1976 to 2016 to identify key trends. We have gone through the study to bring you the top five takeaways.

1. Patents with at least one woman inventor are growing, but the rate of growth has slowed 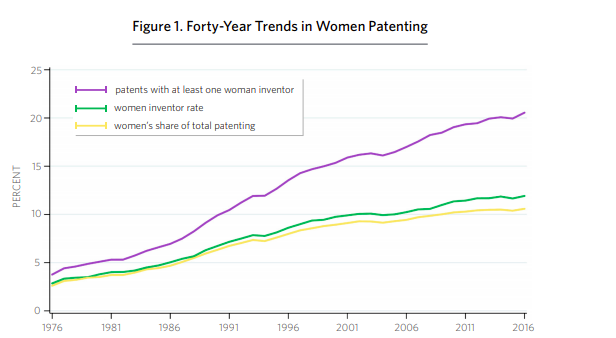 The number of patents with at least one woman inventor has been on an upward trend since 1976. However, growth has slowed over the past two decades, only increasing by 6% between 1998 and 2016.

The growth of the purple line has been driven by mixed-gender teams, with female participation particularly high in teams of four or more. This reflects a wider trend towards larger inventor groups over individual inventors, but it is worth noting that as these teams grow, women are actually accounting for a shrinking proportion within them. In fact, the share of patents by individual woman inventors and teams of all women hardly grew between 1976 and 2016.

The two lower lines paint a less optimistic picture of women’s participation in patenting. The green line shows that the women inventor rate hit 10% in 2000 but had increased to only 12% by 2016. The yellow line indicates that despite the noticeable increase in female patentees, overall women still account for just a small share of total patenting activity. 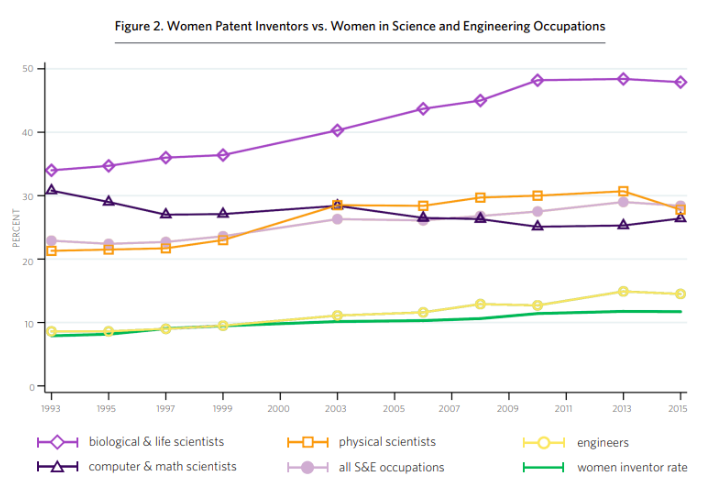 The argument can be made that women comprise a smaller share of patenting activity because fewer of them pursue careers in science and engineering (S&E). However, in 2015 women made up 28% of the total S&E workforce, but only represented 12% of inventors listed on granted patents.

The graph above shows that women participate at a much higher rate in the S&E workforce than they invent patented technology, with the exception of engineering. Biological and life sciences stood out for its high participation of women. They represent 48% of the workforce, but despite this, the women inventor rate stands at 25% on biotechnology patents, and 23% on pharmaceutical patents.

3. Most women inventors are found in tech-heavy states and those with a larger female workforce 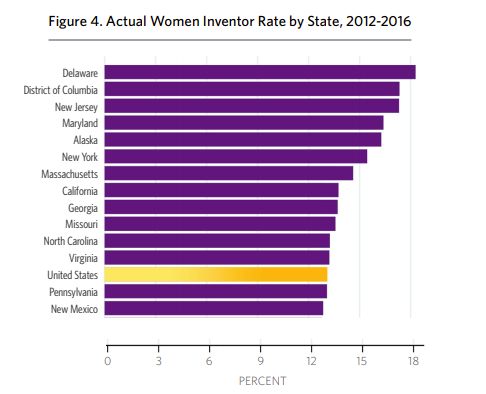 There is a larger share of female patentees in the coastal states, such as in New York, Massachusetts and California. The number of women inventors in the Golden State is important to note, as 22% of all the US resident inventors named on patents granted between 2012 and 2016 live there. Delaware, the District of Columbia and New Jersey take the top spots for the highest women inventor rates. 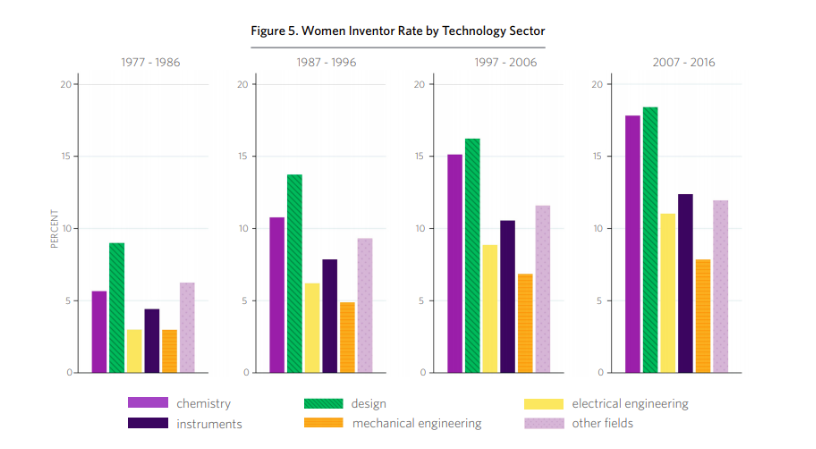 The share of female patentees has increased across technology sectors. The most growth was seen in chemistry and design patents, with women accounting for 18% of chemistry patents issued in the last decade. In the chemistry field, women participate more often in biotechnology, pharmaceuticals and organic fine chemistry.

Mechanical engineering has seen the slowest growth in women inventor rate, which is not surprising considering the smaller share of women in this workforce.

Despite the growing women inventor rate, most of this improvement is seen within technology fields and organisations where women have traditionally patented, suggesting that women are specialising in certain industries, but not branching into more male-dominated fields. 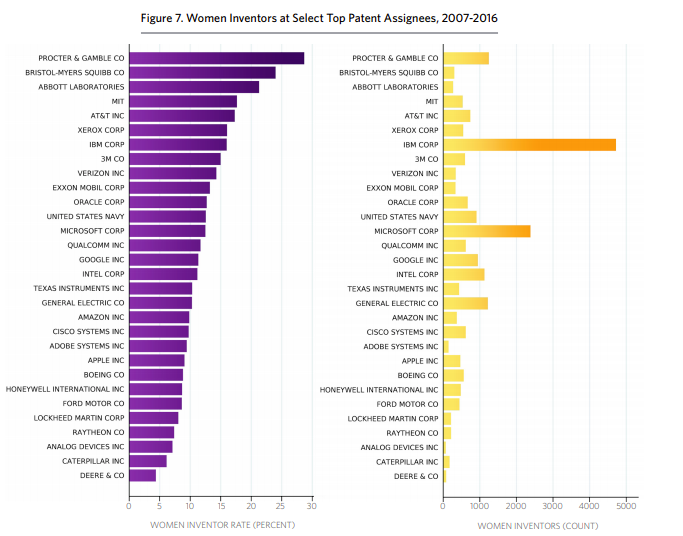 P&G has the highest women inventor rate, sitting at 29%, and with close to 4,500 IBM has the largest group of female patentees. Microsoft features a relatively large number of women inventors, however, the graph on the left shows that its women inventor rate is around average. Women inventor rates are highest among chemical and pharmaceutical companies, with P&G, Bristol-Myers Squibb and Abbott Laboratories taking the first three spots. High-tech companies show varied rates. For example, IBM is at 16%, while Qualcomm sits at 12% and Apple only at 9%.

There has undeniably been positive progress in the number of women getting involved in patenting, but this study suggests that, at least in the US, the potential of women inventors has yet to be realised. This appears to reflect a global trend. The 2018 WIPO Indicators paper reported that the share of women inventors named in PCT applications had grown nearly 10 percentage points since 2003 to hit 31.2%. This means that in this time the total number of PCT applications with at least one female inventor has almost tripled. However, on a global scale, the women listed in patent applications is still low compared to the total number of inventors.

Female inventorship in the patent field has come to the forefront of debate, yet there are few tangible plans to drive forward women’s participation. India’s patent office has recently announced that it will expedite examination if a patent application has at least one women inventor, could such policy changes be implemented at other IP offices too? Whether or not governments, universities and businesses will prioritise this discussion remains to be seen, but women inventors are clearly an under-tapped resource, so let’s hope something happens – and soon.

Note: Unless stated otherwise, the data and information in this reported was sourced from Progress and Potential: A profile of women inventors on US patents