The regime is set out in the Foreign Acquisitions and Takeover Act 1975 (Cth) (the Act). Under the Act, the Treasurer of Australia has the power to examine proposed foreign acquisitions and decide whether to:

Typically, matters that the Treasurer will take into consideration when making a decision include the impact of the acquisition on the Australian economy and community, national security, and the character of the investor.

Failure to comply with the Act can result in harsh financial penalties and possible criminal prosecution.

When is the requirement to seek FIRB approval triggered?

A foreign investor should assess the requirement to apply for FIRB approval if the acquisition is a significant and/or notifiable action under the Act that meets prescribed monetary thresholds and no exemptions apply.

Who is a foreign person?

An entity is a foreign person if they meet one of the following criteria:

An acquisition of an interest in Australian land is broadly defined

For the purposes of the Act, Australian land is classified into four categories:

What are the thresholds?

The table below contains the prescribed monetary thresholds for acquisitions of interests in land for 2018.* These thresholds are indexed annually on January 1 every year. 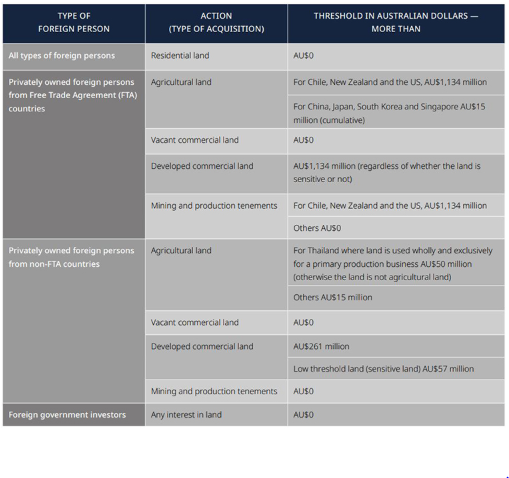 * This table does not contain reference to Canada and Mexico which became FTA countries on December 30, 2018. Readers should contact our Australian offices directly for further information on the relevant thresholds for these countries.

Despite the seemingly onerous nature of the FIRB approval requirements, the Treasurer will usually only exercise a discretion to prohibit an acquisition in exceptional circumstances.

What are the main exemptions?

The Act provides for various exemptions and some of the more regularly applied exemptions include the following:

What does this all mean for foreign investors looking to invest in an interest in Australian land?

Understanding when and how Australia’s foreign investment regime applies can be a complex and nuanced process. Given the harsh penalties for non-compliance and relatively high application fees, each proposed foreign acquisition requires careful analysis. It is important to assess all the circumstances of the proposed acquisition at an early stage, to identify any issues and develop a strategy to manage the factors that may cause delay or put the acquisition at risk if the necessary FIRB approvals are not obtained.

Despite the seemingly onerous nature of the FIRB approval requirements, the Treasurer will usually only exercise a discretion to prohibit an acquisition in exceptional circumstances. There have been some highprofile and controversial decisions recently; however, in our experience the vast majority of applications for FIRB approval for proposed acquisitions are accepted and approved by the Treasurer.

Even for what might be considered a routine application, it is important to follow the correct process, given the potential consequences if FIRB approval is not obtained or applied for when it should.