Patent Attorney Chris Burnett has recently had cause to investigate Atrial Septal Defect Closure Devices and became interested in the history of their development and what the future may hold for these devices.

An Atrial Septal Defect (ASD) is a hole in the septum between the top two chambers of the heart. ASDs are the most common congenital heart defects in adults and the second most common in children after ventricular septal defects. ASDs, if left untreated, can result in blood being forced through the defect which can cause right ventricular volume, and eventually pressure, overload. Further complications can include right ventricular failure, pulmonary hypotension, arrhythmia, and exercise intolerance, though many symptoms may go unnoticed for a long time. In most cases an ASD will need to be closed, and since 1952 surgical ASD closure was the only interventional treatment available. The landscape changed in 1975 when devices were delivered to the heart using non-invasive techniques.

This article looks at a snapshot of the past, present and future of ASD closure devices through the patent records.

To date, more than 20 devices have been developed and clinically trialled. Of these only eight have been FDA-approved for use in the United States or CE-marked for use in the European Community. The perfect ASD closure device would be one which completely closes the defect with a minimal risk of complications, is easily implantable and can be re-positioned and retrieved. As yet, no devices currently on the market can fulfil all of these criteria. We will present a selection of these devices. 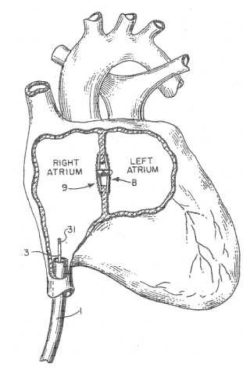 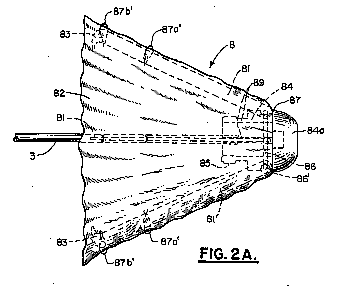 King and Mills designed a closure device that was first tested in dogs in 1972, before this patent was filed in 1973. This device was first implanted in ten humans in 1975, with a 50% success rate. Despite the positive results, this design was not further developed. The problems surrounding the device were a lack of a self-centring mechanism and irretrievability should the device be incorrectly implanted.

The patent is directed to apparatus and an associated method of use for closing off a shunt defect in the septum. The device is designed to be smaller than the hole when retracted, passed through the hole and then expanded to become larger than the hole. The apparatus itself comprises a dual set of umbrella-like structures for placement on opposite sides of the hole with a central hub that connects the two umbrellas together through the hole. The device is positioned and expanded by a wire inserted into the heart by a catheter.

The Buttoned Device was developed between 1990 and 2001. Whilst it was implanted into approximately 3000 patients, it never received FDA approval despite numerous generational developments.

Later versions of this device were self-centring, though the device was found to be unreliable. 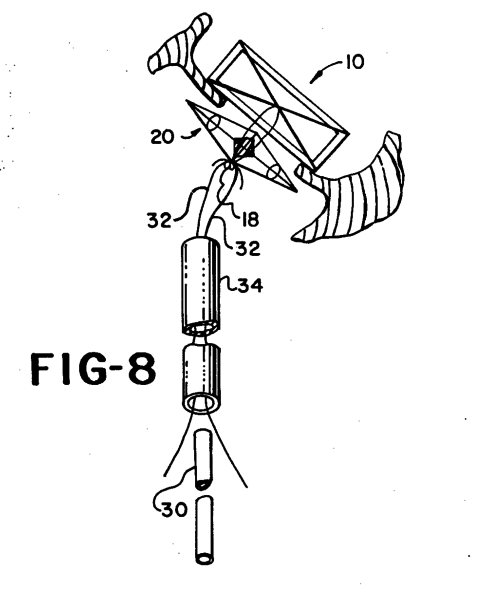 US5451235, filed in 1994, is one of a number of patents filed in the name of James E Lock, who first developed the Clamshell Occluder in 1987. The Lock Clamshell Occluder was developed at around the same time as the Buttoned Device above. The patent is directed to a device comprising first and second expandable occluders which are connectable together through the ASD by a pivot which permits relative rotation of the two occluders when expanded.

The occluders each comprise a central hub from which radiate a number of double-hinged Dacron-coated struts. The Lock Clamshell Occluder had some important improvements over the earlier King and Mills device, most notably that the stainless steel struts permitted some centring ability and the device could be retrieved without surgical intervention. Approximately a thousand of these devices were implanted in patients, though there were problems with the arms of the device fracturing. 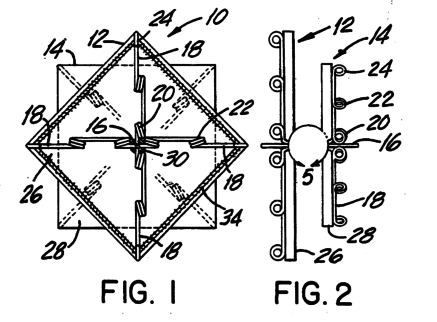 Pavcnik’s Monodisk is based on the concept of a single umbrella, first developed by Rashkind (but not patented!). The device comprises a ring of coiled stainless steel (see numeral 10 on the picture below) surrounding a double layered disc of nylon mesh. The coiled rim is flexible to permit the ring to be passed through the septal defect. Three parallel hollow wires (marked as 18 on the picture below) are sutured to the back of the nylon disk through which a thread is passed. The three wires are bent back into a catheter, and when the device has been deployed, the threads are released causing the wires to spring back towards the disk and clasp the defect. The Monodisk was neither repositionable nor retrievable, so despite some positive tests did not make it to market. 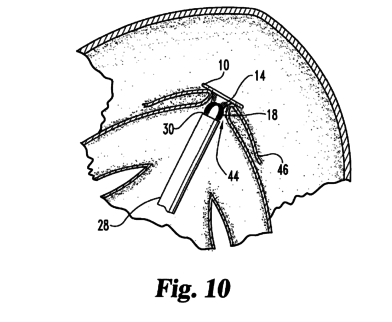 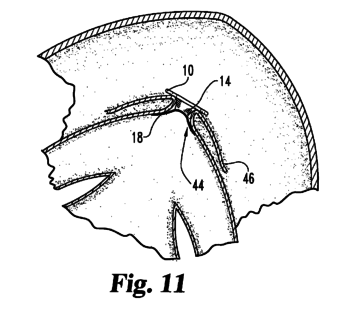 The Amplatzer Septal Occluder (ASO) was originally developed by Dr Kurt Amplatz and is currently the most widely used ASD device on the market, being both FDA and CE approved. The ASO marked a step change from the previous devices, which relied on a mesh supported on a metal framework. These earlier devices had the disadvantage that the wire frames flex every time the heart beats, and since this is over 100,000 times per day, structural fatigue in time causes a large number of devices to fail.

This problem is solved by the ASO which comprises a one-piece nickel-titanium (Nitinol) mesh filled with Dacron fibres. The ASO is moulded and heat set into a dumbbell shape (see the Figures below) having two disks for placement either side of the defect (to prevent device movement) and a waist that centres the device and occludes the defect. The waist is approximately the thickness of the atrial septum.

Nitinol is a superelastic memory wire, that can be stretched and compressed into a different shape, but which will return to its set, moulded shape when released. For deployment, the ASO is stretched and inserted into a catheter, which is then inserted into the heart via a femoral vein. The catheter is placed through the ASD and the first disk shaped part of the device is released, where it returns to its original shape. The catheter is pulled so the first disk pulls against the wall of the atrium before the second disk is released. The ASO now in its original, moulded shape, presses against both walls of the atrium and the waist section occludes the defect. One implanted, heart tissue in time will completely grow over the device. 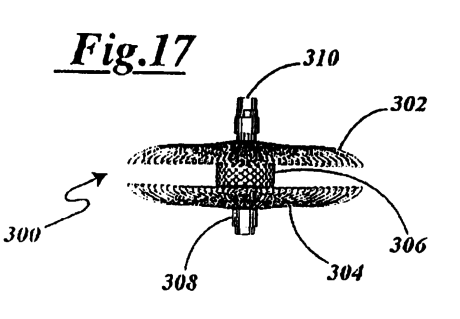 Occlutech are currently the leading European manufacturer of ASD septal occluders, and have produced a few generations of device since 2003, the priority year of the above patent. Similar to the Amplatzer Septal Occluder in terms of its structure, materials, deployment and effectiveness, later generations of device have improved flexibility during device positioning. 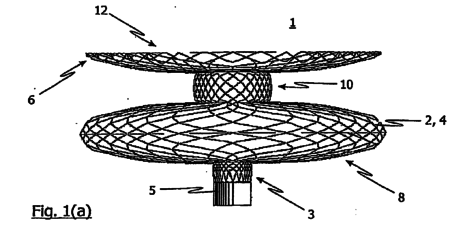 Once a device has been implanted into the heart, the patient’s own body tissue will completely grow over the device in a matter of months. The Carag Bioresorbable Septal Occluder (CBSO) is part of a new wave of devices that are bioresorbable and will in time be replaced entirely with natural body tissue. The CBSO is a double-disk polyester device with an expandable and retractable frame work made from polylacticcoglycolic acid (PLGA). The device is both fluoroscopically visible (to aid implantation and detection) and is completely resorbed by the body between 18-24 months after implantation, which is long after the heart tissue will have grown to cover the hole and device. Bioresorbable devices have the potential to revolutionise the ASD device industry due to overcoming wire-related complications such as wall injury, wire fractures or thrombus formation. 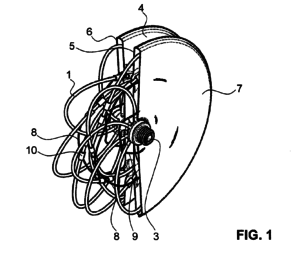 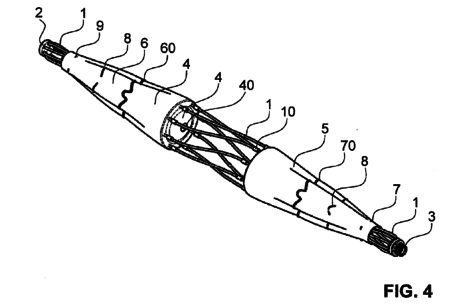 It is interesting to see how the devices have improved through the patent filings. Initially the defect was treated mechanically, simply sealing the defect with an installed plug. The early improvements therefore related to mechanical alterations. However, as the understanding of the technology, and the body’s reaction to the devices, improved the devices were able make use of the body’s natural reactions to foreign bodies, for example clotting over an implanted scaffold, to improve the performance of the device.

The future appears to be for the device to provide a scaffold for the defect to heal itself and for that scaffold to eventually dissolve leaving only natural tissue. This does away with the requirement for a device to be mechanically stable within the heart for many decades and will hopefully make these treatments safer and more effective over the coming years.