Against the backdrop of Brexit, there has been an increased interest in London as an arbitral seat, intensifying with the UK’s exit from the EU in January 2020 and over the few months leading up to the end of the transitional arrangements on 31 December 2020. This greater focus on London has coincided with several high profile Supreme Court cases which have addressed key aspects of arbitration law. In this regard, Q4 of 2020 saw the most significant English arbitration decisions since 2011 and the judgments in question have placed both arbitrator impartiality and the governing law of the arbitration agreement under the lens. In this article, we consider the recent Supreme Court decisions and where these leave London as a seat of arbitration.

What happened in Halliburton?1

The underlying arbitration between Halliburton and Chubb related to the Deepwater Horizon incident and Halliburton’s claim under an insurance policy. As the presiding arbitrator could not be agreed, the English High Court appointed Kenneth Rokison QC in June 2015. Mr Rokison was subsequently appointed by Chubb in a further arbitration in relation to Transocean’s separate claim against Chubb under the same insurance cover (December 2015). Transocean then appointed him in relation to Transocean’s claim against a different insurer under the same layer of insurance (August 2016). Halliburton became aware of these arbitrations in November 2016 and then applied to the English Court for Mr Rokison’s removal under s24 of the English Arbitration Act 1996. Both this application and a subsequent appeal to the Court of Appeal, were rejected.

As the case raised questions of general importance in the law of international arbitration, the Supreme Court permitted interventions from multiple arbitral institutions and organisations, notably the LCIA, ICC, CIArb, LMAA and GAFTA.

The Supreme Court was asked to decide two issues:

The Supreme Court made it clear that impartiality was vital in international arbitration. There was no suggestion of actual bias, so the Supreme Court was required to decide whether there was an appearance of bias, applying the well-established test of “whether the fair-minded and informed observer, having considered the facts, would conclude that there was a real possibility that the tribunal was biased.” The Supreme Court decided that when the apparent bias test is applied to arbitrators, the unique features of arbitration must be considered, including the private nature of arbitration, the limited rights of appeal, the appointment process and the potential “financial interest in obtaining further appointments as arbitrator”. The Court emphasised that in English law, party-appointed and presiding arbitrators must meet exactly the same high standards of fairness and impartiality.

The decision confirmed that all arbitrators have a duty of disclosure concerning facts and circumstances which would or might reasonably give rise to the appearance of bias. In considering compliance with this duty, the Court will assess the circumstances at the time the disclosure fell to be made. The Court emphasised that the duty aligned with best practice set out in the International Bar Association ("IBA") Guidelines on Conflicts of Interest in International Arbitration 2014 and the approach of arbitration institutions such as the LCIA and ICC.

The Supreme Court determined that acceptance of multiple overlapping appointments of this kind may have to be disclosed, in accordance with usual practice in the relevant type of arbitration. Failure to disclose appointment in overlapping arbitrations may amount to apparent bias and will be one factor taken into account in deciding whether there was a real possibility of bias. Apparent bias is assessed in light of the circumstances at the time that the challenge to the arbitrator is heard.

The Supreme Court decided that Mr Rokison had been under a legal duty to disclose the multiple appointments, because disclosure of this kind was the norm in Bermuda Form arbitration and because at the time of that appointment it “might reasonably give rise to the real possibility of bias”.2

However, the Supreme Court found that there was no appearance of bias in this case, for the following five reasons:

What was decided in Enka v Chubb?3

The English Supreme Court case was an appeal from the decision of the Court of Appeal, which had granted an anti-suit injunction preventing Chubb Russia4 from continuing a subrogation claim in the Russian courts. This was on the basis that the Russian claim was brought in breach of the arbitration agreement in question, which the Court of Appeal decided was governed by English law.

The majority of the Supreme Court decided that an arbitration agreement will usually be governed by the same law that has been chosen to govern the main contract and this choice of law will not be displaced by the selection of a different seat of arbitration. Additional factors may be relevant in some circumstances, including where there is a serious risk that the arbitration agreement would be rendered ineffective if it were to be governed by the main contractual governing law. 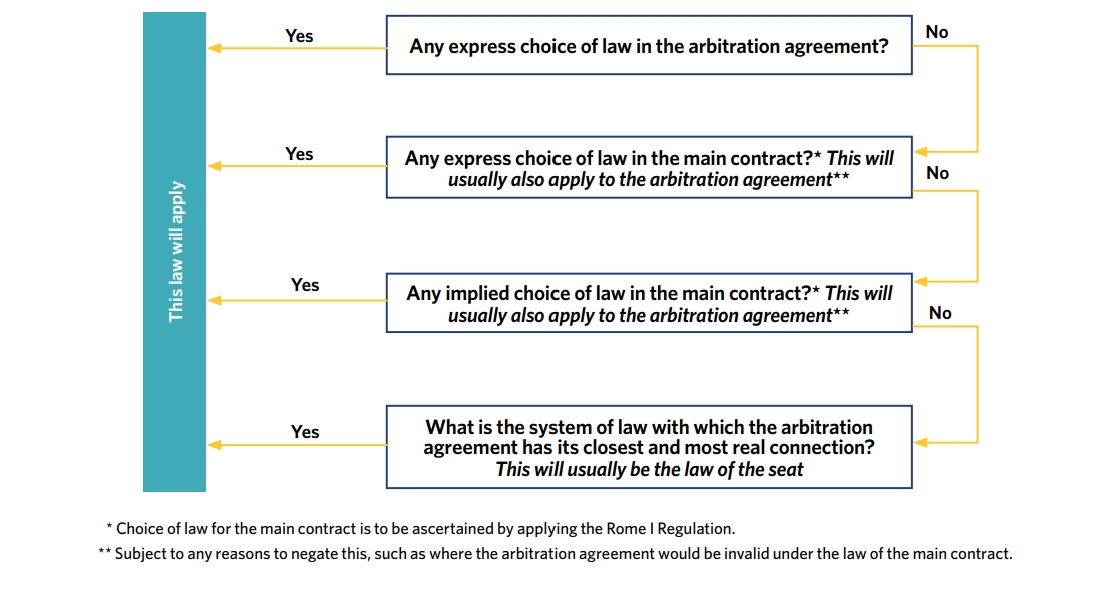 The majority decided that there had been no express or implied choice of Russian governing law for the main contract. Under Article 4(3) of the Rome I Regulation, the contract was governed by Russian law, on the basis that this was the country with which the contract was most closely connected. This meant that it was necessary to consider the system of law with which the arbitration agreement had its closest and most real connection, which was determined to be English law, being the law of the seat.

In relation to the anti-suit injunction, the Supreme Court decided that it was irrelevant whether an arbitration agreement was governed by English or foreign law, confirming the availability of anti-suit relief.

Both these judgments have generated a significant volume of comment in the international arbitration community. There has been a particularly mixed reaction internationally to the Halliburton decision, with a number of criticisms made of the judgment, including whether the application of the principles outlined in the judgment to the facts in question met the expectations of the international arbitration community. There have been criticisms of the long-standing objective nature of the apparent bias test in English law and some commentators have also raised concerns around the differing timings set by the Supreme Court for assessing compliance with arbitrator duties of disclosure and impartiality.

In relation to the Enka v Chubb case, there are certainly differing approaches internationally to the question of determining governing law of an arbitration clause. The French courts, for example, will review the scope of an arbitration clause in a Paris-seated arbitration with regard to mandatory French law/public policy, the parties’ intentions and the case background, but without reference to any domestic law. These different approaches to governing law can put national courts on something of a collision course, as in the recent Kabab-Ji SAL saga. In that case, the Paris Court of Appeal refused to set aside an arbitral award handed down by an ICC Tribunal seated in Paris, despite the same award having been denied enforcement by the English Court of Appeal, on the basis that English law governed the arbitration agreement and that the award was made against a non-party.5

While there are clearly a range of standpoints on both decisions, these definitive judgments have brought a welcome clarity to two important areas of English arbitration law, with the courts taking a pro-arbitration stance and reinforcing the centrality of party autonomy. After these decisions there is greater certainty on how governing law of an arbitration agreement will be determined by the English courts and how the courts will assess arbitrator conflicts. While these decisions have not won entirely unanimous support, importantly they are both pro-arbitration, in that Enka v Chubb has confirmed the ability to use anti-suit injunctions in support of arbitration and the Halliburton decision has underlined that the English courts will judge any allegations of apparent bias carefully in the context of the specific circumstances of each particular case.

Where does this leave London?

The finding in Halliburton of no apparent bias may have been criticised by some, but that decision was founded on the narrow facts of the particular ad hoc arbitration in issue and the reasoning is pro-arbitration. Further, selecting London-seated institutional arbitration provides a measure of certainty that conflicts will be dealt with in the manner expected by the international arbitration community. This is because challenge applications are first made to the relevant institution, so that challenges are considered by specialists in international arbitration, who are well aware of the standards of arbitrator ethics expected internationally. In relation to governing law, some parties from jurisdictions with a different approach to interpreting arbitration agreements might not be inclined to agree with the English law principles set out in Enka v Chubb. That said, the decision ensures certainty and this issue can in any event effectively be side-stepped by expressly referring to the chosen governing law in the arbitration clause itself.7

Ultimately, the key factors behind London’s leading position as a seat for both institutional and ad hoc arbitration remain unaltered by the latest judgments and parties are likely to continue to be attracted by the arbitration-friendly legislative framework and supportive courts, along with the existence of a thriving arbitration hub.