The ’843 patent is titled “Customer Image Capture and Use Thereof in a Retailing System.” The ’843 patent claims a system, apparatus, and method for manipulating an image of a customer based on a model image to allow the customer to virtually assess the desired product without having to physically try it on. To accomplish the intended use described above, the system stores reference images associated with the products in a store. A user can input an image of himself or herself, and the system generates a composite image of the reference image and the user-input image. The composite image shows the user how the desired product would appear when worn. This process is described in Figure 2 of the ’843 patent. 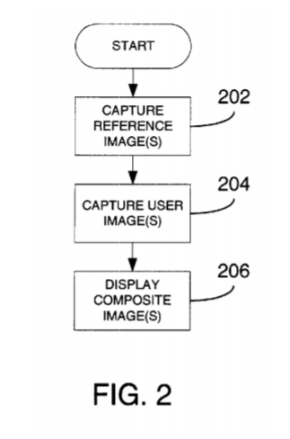 The ’843 patent identifies its improvement over the prior art as the ability to provide a customer with actual detail of what his or her appearance would be when wearing the desired product. Previous attempts in the prior art fail to provide any customer-specific detail in the image or fail to allow for movement when virtually assessing the product. As such, the technology in the ’843 patent states that it provides improvements over the prior art that would lead to a reduction in shopping time and a reduced chance that the customer would need to return the item later.

As discussed previously, the complaint alleges that Ulta Beauty directly and indirectly infringes the ’843 patent via its mobile application, which allows users to virtually test products prior to purchasing them. The complaint alleges that Ulta Beauty’s Ulta GLAMlab App allows the customer to capture an image of themselves to be used in a composite image including the customer image and an image corresponding to a potential purchase item. The complaint further alleges that the user can select from a variety of makeup products, and the GLAMlab App will create corresponding composite images for each selected product. As such, the application allows customers to assess potential purchase items without having to physically put the makeup on. To support its claims against Ulta Beauty and the Ulta GLAMlab App, Lennon Image Technologies includes screenshots of a user operating the application interface to try on lipstick in its complaint.

If this case does not settle, we may see the defendant answer the complaint, or perhaps move to dismiss the complaint as deficient in some respect. Ulta Beauty may choose to take other action against the ’843 patent, including filing a petition for inter partes review challenging the patentability of the ’843 patent. We will keep you posted of future developments in this AR/VR litigation.