Losing your lease - too little, too late led to loss of London flat

Summary: £1500 of arrears led to the loss of an unoccupied London flat. The leaseholder’s attempts to unravel the long lease forfeiture were too little too late, and she lost a valuable property. Court orders are binding and effective until they are set aside, even if there are grounds to do so. Tenants of long leases should avoid letting arrears build up, give their landlord an up-to-date address and act quickly if their lease is at risk.

Ms Gibbs had a 999 year lease of a flat in Whitechapel, London. She went to live in Hong Kong in 1990. The flat was generally unoccupied after that.

The arrears claim, and subsequent possession proceedings, were sent to the wrong addresses (the flat and her parents’ address - neither of which was her last known or usual residence) so were not validly served. Notwithstanding this, the Court made an Order for possession.

The landlord re-entered the property and changed the locks in April 2010. As it turned out, the flat was unoccupied so the landlord did not actually need a court order to forfeit (the Protection from Eviction Act 1977 provisions don’t apply to unoccupied property).

Landlords should note that it is difficult to establish whether a property is unoccupied, so, to avoid sanctions for an unlawful eviction, it is recommended that an Order for possession is obtained from the court prior to entering residential premises.

The sale and Mrs Gibbs’ claim

In June 2011, the landlord marketed the flat. Mrs Gibbs became aware soon after. Her solicitors wrote to the landlord’s solicitors and agents, and tried (unsuccessfully) to register a notice against the title at the Land Registry, which would have alerted a purchaser to the dispute.

In October 2011, Mrs Gibbs issued a claim asking the possession order to be set aside and/or relief from forfeiture (which would have the effect of reinstating her lease).

By the trial, Mrs Gibbs had abandoned her claim to set aside the possession order and relief from forfeiture, and was only claiming the proceeds of sale on the grounds of “unjust enrichment”.

Her claim was dismissed because there can be no claim for unjust enrichment where property is sold pursuant to a court order, unless that order is set aside (even where there are grounds to do so, such as invalid service).

Mrs Gibbs appealed to the Court of Appeal but lost.

They upheld the general rule that court orders have ‘the force of the law’, so are valid and enforceable until they are set aside.

The court rejected Mrs Gibbs’ argument for an exception where an order can’t be set aside because of third party interests (such as the grant of new lease). The court could have set aside the possession order on terms that did not affect the new tenant’s title (for example, by limiting it to a damages claim).

So dropping the application to set aside was fatal to her claim. Enrichment is not “unjust” when the actions are carried out under a court order.

However, the Court of Appeal noted that applying to set aside the possession order wouldn’t have helped Mrs Gibbs here, since the landlord had lawfully forfeited by peaceable re-entry when it changed the locks. Although at the time, the landlord thought it was enforcing the possession order, the forfeiture by changing the locks was lawful forfeiture in its own right.

Her application for relief from forfeiture would have been too late (18 months after the possession).

The court commented that applications for relief must generally be made within 6 months of the forfeiture (except that for cases in the High Court, a few days’ grace might be allowed).

The court suggested a previous case, where the court granted the tenant relief from forfeiture 14 months later, was wrongly decided.

These (non-binding) comments give a useful indication on the court’s position on forfeiture timescales. 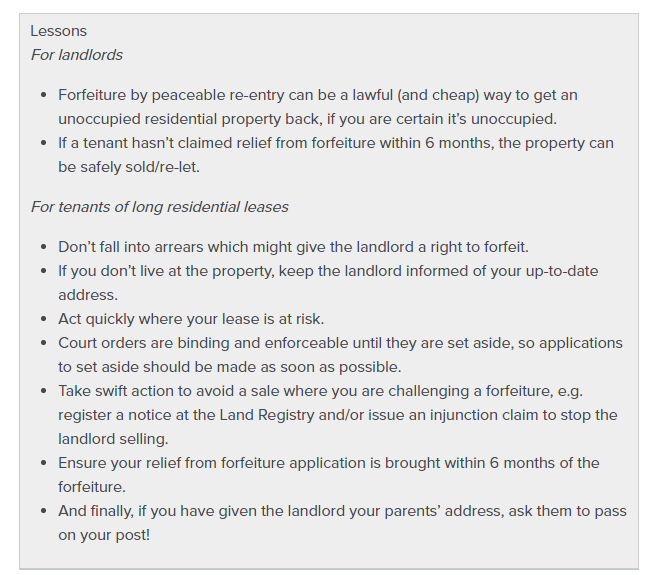