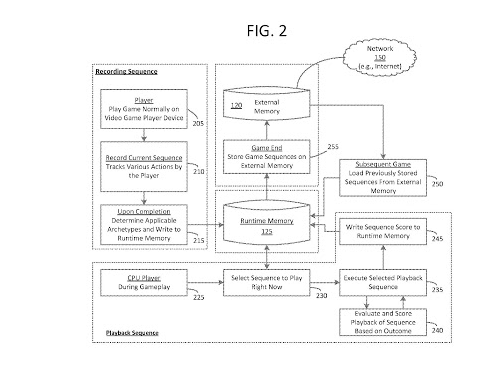 Summary: U.S. Patent No. 9,616,329 (the ‘329 Patent) describes a system for adaptive learning in a video game engine. AI opponents often fail to replicate the adaptive learning abilities of a human opponent. A human can quickly analyze an opponent’s strategy and adjust easily. The ‘329 Patent hopes to change that by providing a system to implement adaptive learning into a video game. According to the patent, the game will begin to record the gameplay of an initial match. Upon completion of the match, the system will analyze the recording for key moments and player habits which lead to the outcome. For example, in Madden, the game will analyze the sequence and moments that allowed the human player to score a touchdown. The resulting analysis and recorded sequence are stored within the system’s memory. During the second match, the system uses the recording to identify human player’s habits. Using the analysis from earlier, the computer opponent adjusts its tactics to counter the human player. The player may find that the running play that once scored touchdowns is no longer a viable option.