Your domain name, your identity: the risks of not protecting it for your brand image
Blog Intellectual Property Blog

In the current context, the use of domain names is essential so that consumers from any part of the world can access the products and services of companies on the Internet. They allow companies to promote their brand image and connect with the community around them. Domain names are a valuable form of identity and therefore are exposed to fraudulent use. However, how to act against inappropriate uses? Let us see it.

When we start any business, one of the first things to choose is the name that will identify you in the market and, if the homework is done, it will be registered as a trademark (see a related post here). This preliminary analysis has to go further and check, for example, if the brand we have chosen is also available as a domain name. Forgetting this step can have very negative consequences. Let us imagine, for example, that once the entire marketing campaign has been completed and has been released on the market, we realize that the domain name is already registered in favour of a third party. An unpleasant surprise.

What happens when this shop window to the world is owned by a third party outside the company? Or, worse, what happens when a third party deliberately registers a domain name to obtain a “reward” from its legitimate holder or simply to use it in bad faith or to impersonate to divert user traffic? These issues can have a major impact on brand strategy and affect credibility in the market. Fortunately, there are several tools that can help us to combat these fraudulent uses.

In the first place, it should be assessed the possibility of initiating a domain name recovery procedure before an authorized body. For example, the World Intellectual Property Office (WIPO), or Autocontrol when we are dealing with a .es domain. What the respective regulations allow us is to request the cancellation or the transfer of the domain name. There are three requirements that the claimant must prove:

The possibility of resorting to these quasi-arbitration mechanisms does not prevent that, in addition, it is possible to go to the ordinary courts. Thus, in Spain the owner of a registered trademark may initiate legal proceedings for trademark infringement, as provided for in article 34 of the Trademark Law. The owner may prohibit a third party, without the consent of the owner, to use in economic traffic an identical or confusing sign with the one that is registered as a trademark “in telematics’ communication networks and as a domain name”.

Even though the above, the Spanish courts do not have a unanimous criterion regarding the registration and use of domain names by third parties. Thus, the Supreme Court, in its decision 302/2016 dated 9 May 2016, analyses the possible infringement of the sign “dya” by the domain name www.dyasl.es concluding that there was no denominative, graphic and conceptual identity and that the use of the letters “sl” excluded the risk of consumer confusion. On the contrary, the Appeal Court of Alicante, in its decision 410/2017, dated 20 October 2017, concludes that the registration of the domain name www.accionistascaixabank.com infringed the trademark rights of Caixabank. It was not possible to cover the use in the so-called “fair practices” because, “to provide critical and alternative information on the situation of the shareholders of CAIXABANK is not necessary nor essential to use of the sign “shareholderscaixabank”, allowing “to directly relate its content to the actors when that relationship is not true”.

Finally, it would also be possible to resort the unfair competition regulation since the registration of a domain name in bad faith could be framed within an impeding activity, deceiving consumers or, even, taking advantage of the reputation of others. This has been analysed in the recent decision 431/2021 issued by the Appeal Court of Barcelona on 12 March 2021, thus opening a new possibility for the registration and illicit use of domain names.

The company involved in this case was Tus Media, S.L., the entity that owns several Internet portals, including www.tusclasesparticulares.com. The defendant, Superprof, S.A.S., had registered www.tusclasesparticulares.es, an identical domain that changed only in the country code (.com vs .es). Both companies offered private tuition search services. In this case, the plaintiff confirmed that when conducting a Google search with the term “tuclasesparticulares”, the site of Superprof, S.A.S. appeared with the following content: 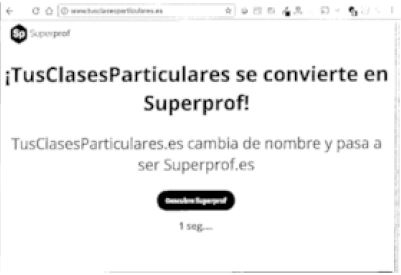 The Appeal Court of Barcelona gives one of lime and another of sand. On the one hand, it considers that domain names “do not constitute an intellectual / industrial property right, nor does it attribute to its owner a monopoly or any exclusive right”. And, therefore, in the absence of a registered trademark, the defendant Superpof had the right to acquire this second domain name www.tusclasesparticulares.es since it has a different extension, without the defendant having any possibility of prohibiting it, much less of claiming its ownership

However, on the other hand, states that the use of a domain name must be done in accordance with fair practices, not trying to mislead the consumer about the business origin of the services. The Court understands that Superprof was making deceptive use of the domain name www.tusclasesparticulares.es, confusing the end user about the company responsible for providing the services in question. Why? Because by stating that “Your Particular Classes becomes Superprof!” the traffic gained by Tus Media, S.L. was being diverted through its domain name www.tusclasesparticulares.com. In light of the foregoing, the Court concludes that we are facing an act of deception prohibited by Article 6 of the Unfair Competition Law and, simultaneously, an act of unfair use of the reputation of others in the terms provided by article 12 of the aforementioned law.

To conclude, before starting any activity, a search must be carried out to confirm that we will be in a position of using the name with which we will identify ourselves in the market, avoiding unexpected surprises. This search includes both the availability of the corresponding domain names and the profiles on social networks and even the applications that are marketed through the main app providers, such as the App Store or Google Play. It is always better to prevent and try to ensure that our brand has the necessary margin also on the Internet, although, as we have just seen, there are also tools that can help us defend our identity in those cases in which third parties have squatted our domains.