This is the first article in a planned series that will analyze available design protection strategies for various categories of products.

Now that the era of work-from-anywhere and software-for-any-service has fully arrived, obtaining proper legal protection for software is paramount for many companies. However, due to an expansive interpretation by courts of the “abstract idea” exception to utility patent eligibility in recent years, protection for software-based systems and methods via utility patents has been made difficult. Accordingly, companies in this space should look to employ design-related rights to protect their software.

In this post, we will address how design patent, copyright, and trademark laws can be employed to provide protection for software-based designs.

While design patent protection in the United States has generally garnered more attention in the past decade than it had at any point in its history going back to the U.S. Supreme Court’s 19th Century decision in Gorham v. White, which defined the “Ordinary Observer” test for design patent infringement, no recent case or issue generated more attention than the landmark damages award in Apple v. Samsung, in which Apple, Inc. (“Apple”) was awarded $533 Million USD for infringement of three of its design patents by Samsung Electronics Co. Ltd. (“Samsung”).

In that case, Apple was awarded damages that were calculated based on the total profits that Samsung obtained for selling devices (i.e., smartphones) that infringed Apple’s three asserted design patents, one of which covered the design of the Graphical User Interface (“GUI”) used as the default home screen of the original iPhone. A cursory analysis of the jury’s damages calculations (image provided below at left) confirms that the highest damages were awarded against Samsung phones that infringed Apple’s GUI design patent (an image of which is provided below at right). 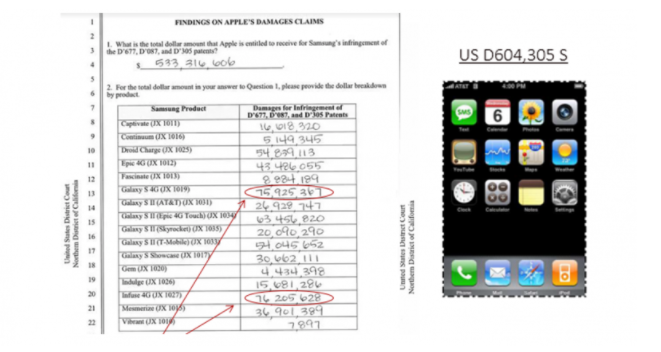 Repeating Apple’s success in asserting a GUI design patent to obtain hundreds of millions of dollars in damages may be difficult, but the successful assertion of Apple’s GUI design patent demonstrates that companies that make or distribute software products can look to design patent protection as a safeguard to protect against infringement.

GUI design patents can capture static, unmoving icons or display screens (i.e., those that can be shown with a single figure), or animated icons or displays (i.e, those that are shown moving or changing via some sequence of figures). Many well-known software companies have invested significant resources to protect both types of GUI displays, as shown in the examples below. 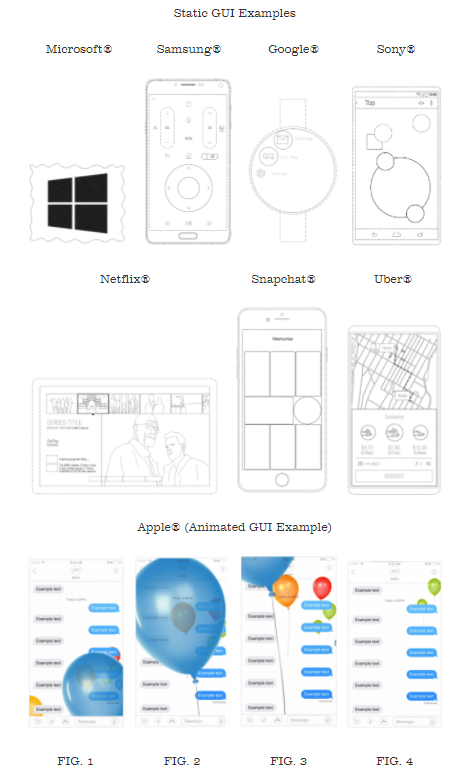 Given the present difficulties associated with protecting software via utility patents, companies that invest resources in developing software products can and should lean on design patent protection to obtain robust IP that can be leveraged in an offensive or defensive capacity.

U.S. copyright law can also be used to obtain protection for software, via registration of the written source code with the U.S. Copyright Office. Interestingly and importantly, copyright protection for a computer program extends to all of the copyrightable expression embodied in the program, which may include the screen displays (e.g., GUIs) that the written source code displays once the code has been compiled, even if a copyright application does not provide images of the screen displays or even specifically mention screen displays. This filing strategy can be employed to simultaneously protect both the audiovisual and computer program elements of videogames and other mixed-media based in software code.

Further, the U.S. Copyright Office has very generous rules relating to the redaction of trade secret material from source code before it is submitted to the Office, and in most cases it is not required to submit the entirety of a source code to the Office in order to obtain a copyright registration that covers the entirety of that code and its contained copyrightable elements.

Used together with design patents, copyrights can provide powerful protection for written software and its associated display elements.

The software context may also give rise to special opportunities to develop and register trademark rights in motion, sound, or mixed-media marks, for example software load or splash screens. One well-known example of such a software-based mark is the Netflix® load screen, which shows a standalone “N” followed by the full company name, accompanied by a low-pitched double-tone.

Finally, in certain scenarios, it is even possible for GUIs and other software-based representations appearing on products to obtain “secondary meaning” (i.e., source-identifying character) over time and thus become registrable as trademarks.