The case is an important reminder that inspiration can tip into misappropriation if a trader develops its brand with the intention of causing consumers to wonder whether the competing brands are associated in some way.

The Federal Court of Australia has found that an Australian burger chain's use of the name "Down-N-Out" infringed the famous American trade mark In-N-Out Burger, contravened the Australian Consumer Law and amounted to passing off.

American company In-N-Out Burger, Inc owns and operates a popular burger franchise in the United States. The majority of its stores are in the US but it regularly hosts single-day pop-up restaurants in other countries around the world, hosting eight events in Australia since 2012.

In-N-Out owns the following three Australian registered trade marks, which it uses to promote its business around the world:

Hashtag Burgers Pty Ltd is an Australian company that operates a number of burger restaurants in Australia using the name D#WN N' OUT and the logo .

Hashtag Burger has used a number of variations including: 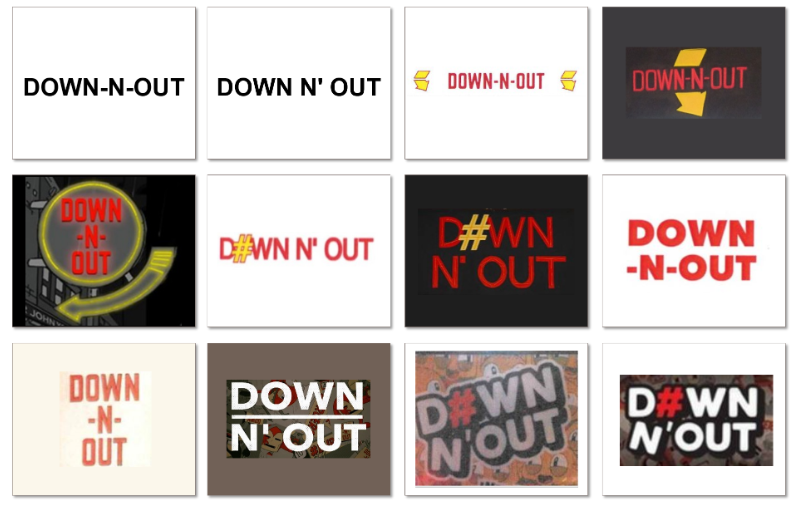 In 2017, In-N-Out sued Hashtag Burgers for infringing its registered trade marks, for passing-off and for misleading and deceptive conduct in contravention of the Australian Consumer Law. In-N-Out also alleged that the directors of Hashtag Burgers should be jointly and severally liable for that conduct.

While Justice Katzmann acknowledged that there are several points of distinction between the In-N-Out marks and the Down N' Out marks, which increased over time as Hashtag Burger's logo evolved, she was not convinced that these changes affected the overall impression on ordinary customers. She considered the certain features of the In-N-Out marks, including the essential "N-Out" part and the prominent use of an arrow, were significant points of similarity, were deliberately chosen in order to confuse customers and to obtain the benefit of the In-N-Out name, trade marks, branding and reputation.

The Down N' Out marks were therefore deceptively similar to and so infringed the In-N-Out marks. Justice Katzmann considered the following factors:

Misleading or deceptive conduct and passing-off

The passing-off and Consumer Law allegations were sustained because a significant number of consumers would think there was an association between In-N-Out and Down-N-Out.

In addition to the above considerations, Justice Katzmann took account of the following relevant factors:

Changes made to Hashtag Burgers' marks over time (including removing the arrow shape and replacing the O in "Down" with a hashtag symbol) were of no consequence since by the time the changes were made, the potential for customers to be deceived had already arisen.

Justice Katzmann considered that the directors had been "cheeky" in choosing the name "Down N' Out" and so the directors had engaged in misleading and deceptive conduct, and were also jointly and severally liable for the period prior to Hashtag Burgers' incorporation in 2017 but not afterwards. The Court was not satisfied on the evidence available that the directors knew or believed that the use of the Down N’ Out name or logos was infringing or likely to infringe In-N-Out's trade marks, particularly in light of evidence showing that they had obtained legal advice to the contrary.

More than just a takeaway burger

The case is an important reminder that there can be a fine line between inspiration and misappropriation. The balance will readily tip in favour of misappropriation if a trader develops its brand with the intention of causing consumers to wonder whether the competing brands are associated in some way.

The case is also a reminder of the importance of conducting proper due diligence prior to the launch of new products or campaigns. This should include a review not only of local trade mark office records but also the wider market place. Just because a trade mark or logo appears not to be in use or is little used does not mean that another trader might not have existing rights in that trade mark or logo, or at least lay claim to such rights. Even if a business does not have a permanent presence or consistent operations in Australia, it may still have rights that may present an impediment to a local Australian campaign.