On November 21, 2022 the U.S. Supreme Court agreed—after passing on the issue once before—to hear Jack Daniel’s (JDPI) challenge to the Ninth Circuit’s ruling in VIP Prods. LLC v. Jack Daniel’s Props, where the Ninth Circuit affirmed without opinion the district court’s grant of summary judgment to VIP and the dismissal of JDPI’s trademark infringement claim,[1] on the grounds that JDPI could not satisfy either prong of the Rogers test. The Rogers test balances free expression under the First Amendment against the trademark protections of the Lanham Act. The Supreme Court granted certiorari on the questions of whether parody uses of another’s mark receive First Amendment protection from liability under the Lanham Act and whether parody is exempt from claims of dilution by tarnishment under 15 U.S.C. § 1125(c)(3)(C). The decision could clarify the balance between trademark and the First Amendment, an issue that has long-confounded practitioners.

JDPI produces Jack Daniel’s, a brand of Tennessee whiskey bottled for over 150 years. VIP manufactures dog toys, some of which poke fun at famous beverage brands. In 2013, VIP introduced its latest creation: the “Bad Spaniels,” a rubber squeaker dog toy that resembles the shape and color of a bottle of Jack Daniel’s whiskey.[2] 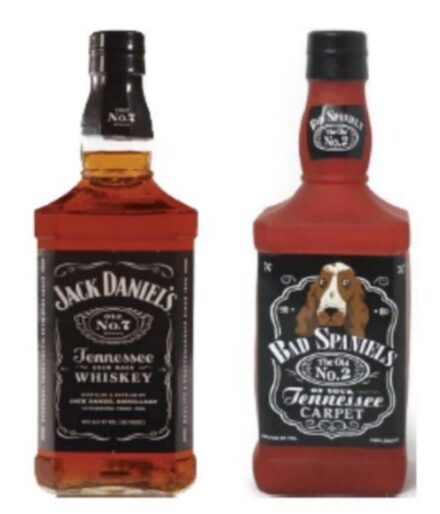 Like the Jack Daniels’ bottle, Bad Spaniels uses font and white lettering over a black background on an item shaped like a whiskey bottle. The toy features a wide-eyed, cartoon spaniel over the words “Bad Spaniels, the Old No. 2, on your Tennessee Carpet.” Although VIP’s packaging specifically disclaims any affiliation with Jack Daniel’s whiskey, JDPI did not find the toy amusing and demanded that VIP stop production. In response, VIP sought a declaratory judgment that its use of “Bad Spaniels” does not infringe or dilute any of JDPI’s trademark rights, and that the Jack Daniel’s trade dress and bottle design are not entitled to trademark protection because they are functional and not distinctive. VIP also moved to cancel the Jack Daniel’s trademark registration for its bottle design. JDPI counterclaimed that the Bad Spaniels toy constitutes trademark infringement and dilution. VIP responded to those allegations by raising fair use and First Amendment defenses.

JDPI won before the district court with a permanent injunction enjoining VIP from manufacturing and selling its Bad Spaniels toy. VIP appealed, and the Ninth Circuit remanded, finding that while the district court had correctly granted summary judgment to JDPI on aesthetic functionality, distinctiveness, and nominative fair use, its bench-trial verdict on trademark infringement was flawed.[3] In its first review of this case, the Ninth Circuit found that Bad Spaniels was entitled to First Amendment protection because it communicated a “humorous message,” using word play to alter the serious phrase that appears on a Jack Daniel’s bottle—Old No. 7 Brand—with a silly message—The Old No. 2. The effect is “a simple” message conveyed by “juxtaposing the irreverent representation of the trademark with the idealized image created by the mark’s owner.”[4] Because the Ninth Circuit found Bad Spaniels to be a humorous expressive work protected by the First Amendment, it did not apply the traditional likelihood of confusion test. Instead, it directed the district court to consider JDPI’s claims under the Rogers test,[5] which requires the plaintiff to show that the defendant’s use of the mark is either (1) “not artistically relevant to the underlying work” or (2) “explicitly misleads consumers as to the source or content of the work.”[6] On remand, the district court granted summary judgment to VIP, finding that JDPI could not win under either prong of the Rogers test.[7] Following the Ninth Circuit’s summary affirmance, the Supreme Court granted JDPI’s petition for certiorari.

The First Amendment and Trademark Law

The First Amendment can provide protection to claims of trademark infringement and dilution by tarnishment if the allegedly infringing or dilutive work is found to be expressive or artistic. But the Ninth Circuit’s slow expansion of the Rogers test to works beyond those that are “traditionally expressive or artistic,” like movies, art, or books, has been criticized. Amici in support of JDPI’s refiled certiorari petition claim that no other circuits have applied Rogers to non-traditionally expressive or artistic works as aggressively as the Ninth Circuit.[8] Others argue that that the Ninth Circuit’s expansion of the Rogers test wrongly tilts the balance against the application of trademark law and its protection of consumers.[9] The district court even acknowledged that in such contexts, “it appears nearly impossible for any trademark holder to prevail under the Rogers test,” because the Rogers test “excuses nearly any use less than slapping another’s trademark on your own work and calling it your own.”[10]

In seeking certiorari, JDPI argued that the Ninth Circuit’s interpretation of the Rogers test conflicts with approaches used by the Second, Seventh, and Eighth Circuits. In those courts, JDPI argued, parody does not supplant the likelihood-of-confusion analysis, but instead forms a part of that analysis.[11] JDPI also noted that the Fourth, Fifth, and Tenth Circuits consider parody as part of the likelihood-of-confusion test. In particular, JDPI noted that when the Fourth Circuit tackled a similar case in 2007, a traditional likelihood-of-confusion test was applied even though the court found that dog toys that loosely resembled small Louis Vuitton handbags were indeed parodies.[12] Thus, even under the approach favored by JDPI, there is no guarantee of success.

JDPI also argued that the Ninth Circuit erred in finding that parodies of famous marks are entirely excluded from dilution analysis,[13]contending that the parody exclusion in 15 U.S.C. § 1125(c)(3)(C) only applies when the parody is not source-identifying.

The forthcoming decision is likely to influence the shape of commercial speech and its relationship to both trademark and free expression. If VIP prevails, we could see courts take a harder look at trademarks and be wary of ways in which enforcing them interferes with rights under the First Amendment. If JDPI prevails, brand owners may breathe a sigh of relief, but we may see a chilling effect on certain forms of speech.

With the growth of non-traditional trademark uses in virtual spaces and in new forms of media, any clarity around these issues would be welcome to trademark holders and possible parodists. But as courts have found, policing the line between infringement and parody is likely to remain challenging, no matter what the Supreme Court decides.