The recent case of Dempsey Group Pty Ltd v Spotlight Pty Ltd [2018] FCA 2016 provides a useful guide in relation to copyright infringement including the limitation to damages in light of innocent infringement.

The Dempsey Products and Spotlight Products are depicted below. 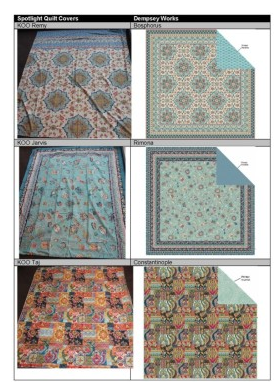 Both Dempsey, through its subsidiary Domestic Textile Corporation Ltd, and Spotlight engaged the same commissioner-manufacturer located in China, Yantai Pacific Home Fashions (Yantai), to produce the products in question. The Spotlight Products were designed based on samples supplied to it or selected from Yantai’s showroom after Spotlight had attended Yantai’s showroom in April 2016.

On or around 30 November 2016, Dempsey made initial contact with Spotlight regarding its claims of copyright infringement. On 2 December 2016 Dempsey provided evidence of its ownership of the Dempsey Works to Spotlight in support of its claim of infringement.

Spotlight began a nationwide recall of all the Spotlight Products on 29 December 2016.

Dempsey commenced proceedings against Spotlight in January 2017. Dempsey submitted that Spotlight infringed its copyright by:

Justice Davies held that the Spotlight Products had reproduced substantial parts of the Dempsey Works which resulted in the same “look” and “feel” as the Dempsey Products. In coming to this decision, Her Honour acknowledged that the Dempsey Products and Spotlight Products were not identical based on certain details, colours and design features. Her Honour noted that “it is unnecessary that the two works bear an overall resemblance to each other nor is it appropriate to dissect the copyright work piecemeal and focus on the differences. The similarities are identified, the question is the qualitative significance of such similarities. Reproduction does not strictly require a complete and accurate correspondence to a “substantial part” of the work”.

The Court also considered whether Spotlight had known, or ought reasonably to have known, that the making of the articles would, if the articles had been made in Australia by Spotlight, have constituted an infringement of copyright in accordance with the Copyright Act 1968 (the Act). Justice Davies concluded that Dempsey did not satisfy its onus of demonstrating that Spotlight had the requisite actual or constructive knowledge of Dempsey’s copyright ownership prior to 2 December 2016 – the point when Spotlight was put on notice and had reasonable grounds to suspect that the sale of the Spotlight Products would constitute copyright infringement. Justice Davies found that Spotlight did not deliberately copy the Dempsey Works and it could be inferred that Yantai failed to inform Spotlight of Dempsey’s copyright.

The Court considered the objective and subjective limbs of the defence of innocent infringement under section 115(3) of the Act with respect to damages. Her Honour held that Spotlight satisfied the subjective limb of the test, as the evidence established that it did not have knowledge that the Spotlight Products would reproduce a substantial part of the Dempsey Works. In respect to the objective limb of the test, the Court recognised that it was reasonable for Spotlight to rely on Yantai’s guidance as to which samples can be used from its showroom without change and which samples should only be used as inspiration. As a result, objectively assessed, the Court agreed that Spotlight had no reason to question the source of copyright until it was put on notice by Dempsey. Her Honour found that an innocent infringement defence had been established by Spotlight for its conduct prior to 2 December 2016.

Notwithstanding, Spotlight’s innocent infringement defence, the Court held that once Spotlight was aware of Dempsey’s copyright, any conduct thereafter constituted copyright infringement which in this case was after 2 December 2016.

Dempsey elected to pursue a claim for damages under the following heads of damages:

The Court held that the evidence did not substantiate all of Dempsey’s damages claims.

The Court limited the term and portion of damages that Dempsey could recover for loss of profits to the sale of the Spotlight Products from 2 December 2016 onwards. Dempsey’s claim of damages was reduced from 80% to 20% with a proposed discount of a further 5% to reflect the uncertainty and unreliability of Dempsey’s calculation of its gross profit figures. Dempsey’s initial claim was held not to be justified as Dempsey failed to demonstrate that its sales were “impacted detrimentally by the infringing conduct and on the basis that the impact was relatively negligible”.

With respect to Dempsey’s claim for loss of reputation, the Court acknowledged that Dempsey’s reputation had suffered due to the infringing conduct. However, Dempsey failed to adduce evidence to substantiate its claims for $100,000 and the Court held that it would limit damages awarded to $10,000.

This case demonstrates that care should be exercised where materials and services are sourced from overseas. Spotlight was able to mitigate its losses in this case as the Court found that, amongst other factors, the longstanding business relationship between Yantai and Spotlight made it reasonable for Spotlight to rely on Yantai’s guidance to avoid damages for copyright infringement up to the date of formerly being put on notice. However, where a business does not have a well-established relationship with the foreign entity, it should ask questions and conduct further investigations as to the source of ownership to avoid any potential claims of copyright infringement.