Jägermeister and the battle of the stags

Earlier this month, EUIPO’s Board of Appeal ruled on an opposition between German drink brand Jägermeister and French company Les Bordes over ownership of a stylised Hubertus stag.

According to legend, Hubertus (also known as Hubert) was a passionate but unscrupulous hunter who underwent a spiritual conversion while out hunting on Good Friday in the year 683. When entering the darkness forest that day with his dog and rifle. He is said to have encountered a majestic white deer, between whose antlers floated a crucifix brimming with light. Recognising it as a divine sign, he renounced his ways and is today considered the patron saint of hunters. The tale has inspired many, including the drink brand Mast-Jägermeister (Jägermeister), which registered a stylised Hubertus stag as a trademark.

Battle of the stags

On 1 September 2021, the Board of Appeal of the European IP Office (EUIPO) assessed an opposition between Jägermeister and Les Bordes Golf International SAS (Les Bordes) over the registration of a stylised symbol of a stag (see illustration right). 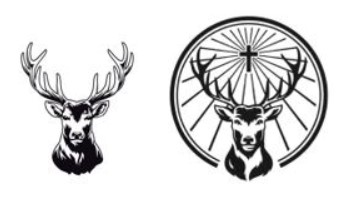 However, EUIPO’s Opposition Division found that the relevant public would not recognise the words 'LES BORDES' as being of geographical origin, given that Les Bordes is the name of a small municipality in France with fewer than 1,900 inhabitants. In addition, the company Les Bordes is not located in this specific French municipality. Therefore, even if a very small proportion of the relevant public interpreted the words as geographical origin, it would be a negligible proportion of the entire public. For that reason, the Opposition Division considered the word elements 'LES BORDES' to contain an average level of distinctiveness.

Jägermeister relied on the 'exceptional status' of its earlier trademarks to argue that they therefore have a higher level of distinctiveness. However, the drink brand was unable to convince the Opposition Division of this higher level of distinctiveness. As a result, the Opposition Division found that, although both contain a depiction of a deer's head, there is low visual and average conceptual similarity between the signs: "The conflicting signs are similar only insofar as their pictorial elements depict an animal of the same species.”

As the differences were considered sufficient for consumers to be able to distinguish the signs safely in the market and to exclude any risk of confusion, Jägermeister's opposition was rejected.

The decision of EUIPO’s Board of Appeal

On appeal, Jägermeister put forward essentially the same arguments. But, while EUIPO’s Board of Appeal largely agreed with the Opposition Division, it took a different direction in its assessment of the two signs.

According to the Board, the Opposition Division failed to recognise that there are no dominant elements in the mark or the younger sign. It considers the circle and the cross between the antlers in Jägermeister's trademark to be elements of secondary importance, since they are details that will not play a decisive role in the memory of the consumer.

Visually and conceptually, the conflicting signs show a black-and-white representation of the same animal and the same part of it: a stag’s head with antlers and part of the neck facing forward. In both signs the proportions of the elements – namely the head, ears, beak, antlers and neck – are almost identical. The additional figurative elements (the circle and the cross between the antlers) and the text 'LES BORDES' are insufficient to eliminate the similarities between the two signs. Therefore, according to the Board of Appeal, both signs are visually and conceptually similar.

It follows from established case law (Lloyd Schuhfabrik Meyer & Co v Klijsen Handel) that the average consumer has only an imperfect image of a mark and, therefore, will not remember all the figurative details of a sign in question. In the Board’s view, therefore, the similarity of the goods and the visual and conceptual similarity of the signs, combined with the inherent distinctiveness of the mark, are sufficient to determine a likelihood of confusion. As a result, it overturned the decision of the Opposition Division and granted the application to annul the trademark of Les Bordes.

The judgment is not yet final, however, as an appeal to the General Court is still possible. Given that Les Bordes did not present any arguments in either the opposition case or the appeal, it seems unlikely that this case will be brought before the European General Court, however.

The importance of detailed argument

Proper submission of detailed arguments is crucial when it comes to enforcing (or challenging) trademark rights. In order to strengthen arguments, it is highly recommendable to submit evidence of use. This can include, for example, market research reports demonstrating the reputation or market share of your trademark. By collecting examples of use each year, quick action can be taken in the event of enforcement of your rights and you will increase the chances of a favourable decision.