Bifurcation at the UPC

One of the most fundamental decisions to be made during the development of the Unified Patent Court (UPC) was whether to adopt a bifurcated system like in Germany, in which infringement and validity of a patent are decided by different courts, or a non-bifurcated system like in France, in which the same court can decide on infringement and validity of a patent within the same proceedings.

I. In principle: no bifurcation

However, there are scenarios in which the decision on infringement and validity are nonetheless not made by the same UPC body in the same proceedings. Such scenarios can arise in case of a counterclaim for revocation in a pending infringement action as well as in case of a standalone revocation action. Also, during the transitional period the validity of European Patents can still be challenged at the EPO or at national courts (in the latter case the respective national part).

Thereby, the Local or Regional Division can prevent the “bifurcation” of the questions of infringement and validity.

However, the Local or Regional Division may also refer the counterclaim for revocation to the Central Division (Art. 33 para. 3 lit. b UPCA). This option leads to a “bifurcation” of the questions of infringement and validity after all. 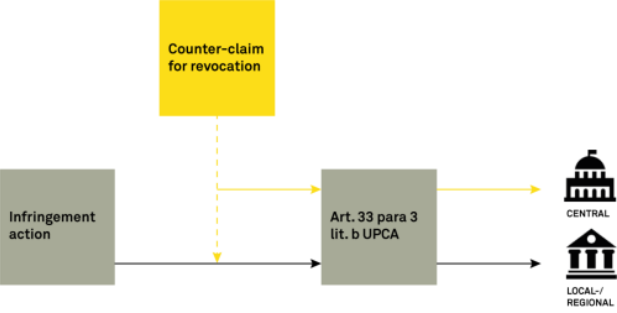 It remains to be seen to which extent the Local and Regional Divisions will make use of this option.

Thus, if a standalone revocation action was brought first, the patent proprietor has the option to manually “bifurcate” the questions of infringement and validity.

In this situation, there are two options to “re-combine” the questions of infringement and revocation:

However, at least the patent proprietor will likely refuse the agreement in this situation, since they intentionally brought the infringement action before the Local or Regional Division and not before the Central Division, even though this would have been possible. 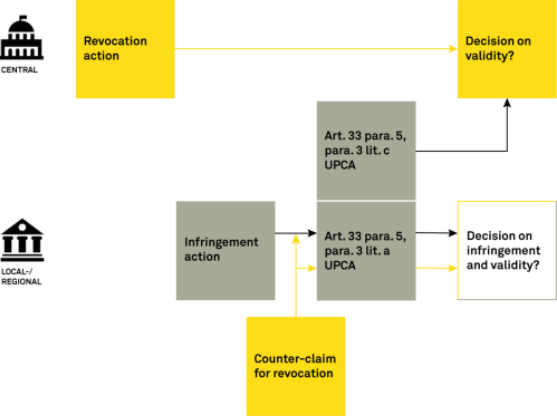 However, the UPCA and the Rules of Procedure do not clearly provide what happens with the main revocation action in such situation.

IV. “Bifurcation” in case of validity actions at the EPO or a national court

During the transitional period, i.e., the first seven years after the start of the UPC, the validity of European Patents can still be challenged at the EPO or, for national validations, at the competent national courts.