QUOTE OF THE WEEK:

I’m going to look at what comes out of the conference committee meeting to reconcile the differences between the Senate and House bill. So I won’t make a final decision until I see what that package is.”

Collins on the Fence. Go ahead and put Sen. Susan Collins back in the “undecided” column for the Tax Cuts and Jobs Act (H.R. 1). “There are major differences between the House and Senate bills. And I don’t know where the bill is going to come out,” Collins said in a Dec. 10 interview with CBS’s Face the Nation.

Collins' vote on the conference report will depend on …

It’s Wednesday, Wednesday. The Tax Cuts and Jobs Act (H.R. 1) continues to dominate Washington this week. President Trump will deliver a major speech on the GOP tax bill this Wednesday. He is expected to highlight the bill’s benefits for middle-class families. Consider the speech his closing argument for the tax cut bill.

At the other end of Pennsylvania Avenue, the conference committee for H.R. 1 is scheduled to convene on Wednesday at 2 p.m. for an open meeting, where the conferees are expected to …

I Don’t Know About You but I’m Feeling 22. One of the big questions that the House and Senate conferees will have to settle is the corporate tax rate. The House and Senate tax bills call for a permanent 20 percent corporate rate with different effective dates. In the past few weeks, there have been serious talks of increasing the rate to 22 percent so that the GOP tax-writers could have a little more revenue to play with. Whether the rate stays at 20 percent or 22 percent …

Told You Tax Cuts Pay for Themselves! Sort of. This is more or less the conclusion of the Treasury Department’s one-page report on the “Analysis of Growth and Revenue Estimates Based on the U.S. Senate Committee on Finance Tax Reform Plan” issued on Dec. 11.

The Treasury’s Office of Tax Policy (OTP) has assessed the revenue impact of the Senate tax bill and found that it would help generate $1.8 trillion over a 10-year period. The report makes it clear that not all of the $1.8 trillion will come from the proposed tax cuts — part of that revenue will come from the administration’s initiatives for regulatory reform, infrastructure development, and welfare reform. In its analysis, the OTP assumes a 2.9 percent GDP growth rate, which has been met with skepticism among economists.

A copy of the report can be found here. 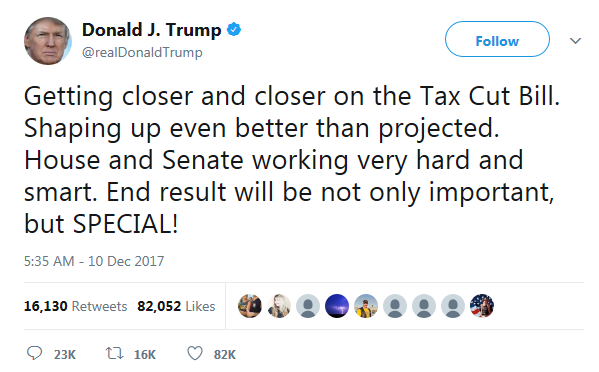 The full committee will mark up a series of banking, housing, and financial services bills. See the full list here.

Subcommittee hearing to examine the operations of CFIUS.

Preliminary agenda for the open session includes a discussion of the Council’s 2017 annual report and an update on the Commodity Futures Trading Commission’s Project KISS to simplify and modernize its rules. The preliminary agenda for the executive session includes a discussion of the recent report from Secretary Mnuchin to the President on the Council’s processes for designating nonbank financial companies and financial market utilities.

Discussion on the future of NAFTA with special guest Rep. Will Hurd (R-TX).

Webinar on the NAFTA negotiations.