On July 2019, the National Constituent Assembly ("ANC") approved the "Constitutional Law that created the high net worth tax"[1] ("Law").  The Law created a tax of 0,25% ("Tax") on all assets of individuals and legal entities that the National Integrated Service of Customs and Tax Administration ("Service") has designated as special taxpayers ("Special Taxpayers").

On August 16, 2019, the ANC, through an Official Notice, ordered the reprint of the Law in the Official Gazette due to a "material error" of the Law[2] (the ''Notice'').  The Notice intends to apply the law retroactively for the fiscal year that started on October 1, 2018 and will close September 30, 3019, even though by the beginning of that fiscal year the Law was not in force.

Following is a summary of the Notice and the Administrative Guidelines.

1.    Modifications of the Notice

According to the Law of Official Publications, the reprint of a law occurs when there are discrepancies between the original and its publication (article 4).  The reprint should be published with a notice indicating the error of the original publication.  The law will be deemed promulgated since its first publication (with the Law, July 3, 2019), but it may not apply retroactively.   The Notice indicated that a material error had occurred, when there were 12.  The modifications of the Notice are mostly substantial and exceed simple material errors.  The Notice:

(b) Modified the tax residence presumption of article 6(1), constraining it to consider as Venezuelan residents only those taxpayers that remain in Venezuela for a continuous or discontinuous period greater than 183 days of the fiscal year, not including the immediate prior year.

(c) In an attempt to apply the tax retroactively to the fiscal year that started on October 1, 2018 and will close on September 30, 2019, it modified article 11, establishing that the taxable event will be occurred on September 30 of each year, and not on the closure of each calendar year, and that the first fiscal year will close on September 30, 2019. The Constitution and the Organic Tax Code, however, establish that: (i) the rules regarding the existence and quantum of the tax obligation of taxes paid by periods, such as the Tax, apply to the fiscal year that starts after the law has entered into force[5]; (ii) no tax law may have retroactive effects, unless it suppresses or reduces sanctions that favor the offender. Consequently, the Tax should apply to the fiscal year starting on October 1, 2019, and not earlier.

(d) Added the paragraph 10 to article 13, in which exempts form the Tax the property in Venezuela, belonging to foreign diplomatic and consular missions, to the extent and with the limitations established by the applicable international agreements and subject to reciprocity.

(e) Eliminated the maximum amount of exemption with property registered as "the main abode" (vivienda principal) before the Service (64,000,000 UT).

(g) Modified article 17 of the Law, establishing that, to determine the value of any property located abroad, it will apply the higher value resulting from the tax regulations of the country where the property is located, or stock exchange listings by September 30 of each year.

(h) Modified articles 18 and 19 of the Law, respectively establishing that: (i) to determine the value of property rights from timesharing, or similar contracts, the higher value will apply between the acquisition price and the market price by September 30 of each year; (ii) the value of shares, jewelry, art objects and antiques, will be computed by the higher value between the current market price of the asset and its acquisition price, according to the updated standards that the Service issues, and current market value by September 30, of each year.

(i) Modified article 24 of the Law and established that the Tax will be caused annually upon the value of the net worth by September 30 of each year. 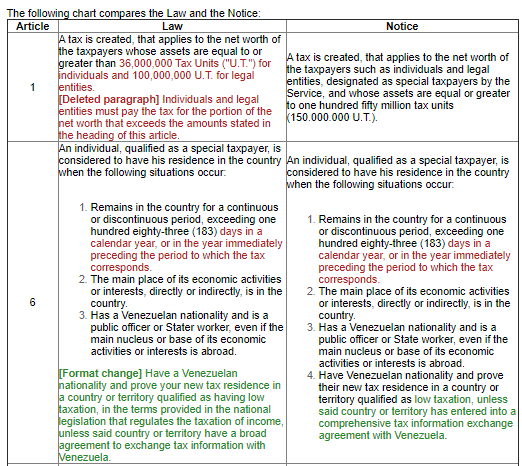 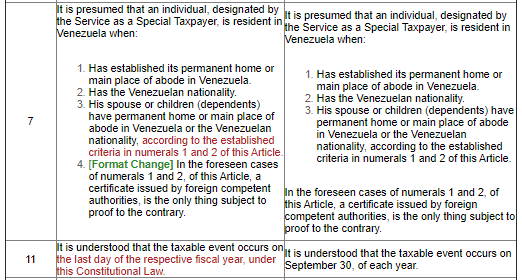 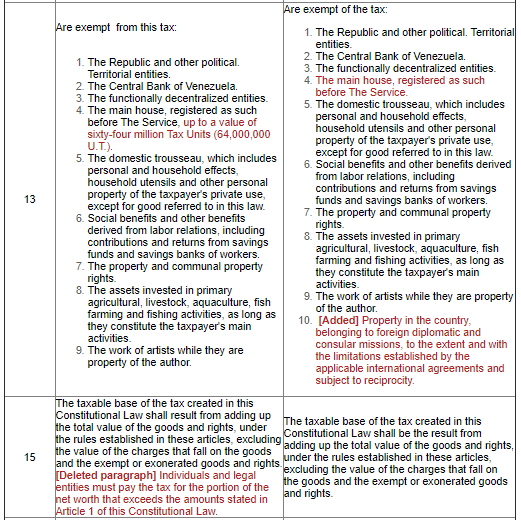 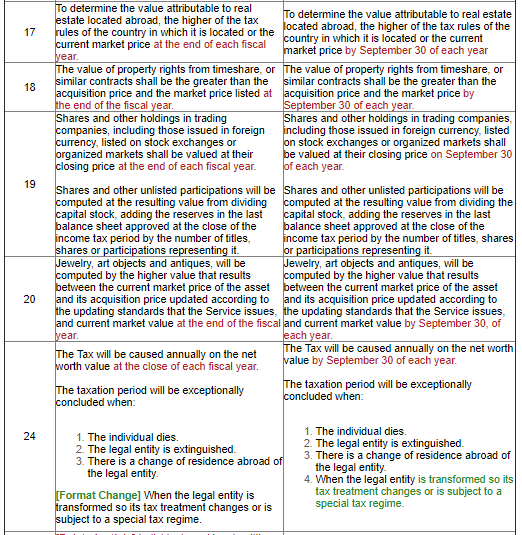 (a) The valuation rules of the assets, foreseen in the Law, are those published in the Service's portal (www.seniat.gob.ve). As they constitute general administrative provisions, they should be enforceable only as of their publication in the Official Gazette.[6]

(b) The Administrative Authorities of the Public Municipal Power must keep updated, the value of the municipal land registry in their jurisdiction.

(d) Taxpayers must file the return between October 1, 2018 and November 30 of each year. For the first fiscal year return, taxpayers must use the net worth value they have at hand.

(e) Taxpayers must have available for the Service the documents, registries, market value, value of the municipal land registry (updated to the return) issued by the competent authority and other documents that support the value of the assets reported in the return.