With today’s World Intellectual Property Day celebrating the importance of IP in sports, research conducted by WTR finds that Manchester United has the most significant trademark portfolio of any global football club. The figures reflect strong IP protection at a club that also boasts the world’s most valuable football brand. Meanwhile, FC Barcelona and Paris Saint-Germain have experienced annual rapid growth in filings, while player superstar Lionel Messi boasts a trademark portfolio that is now double the size of rival Neymar Jr.

For the fourth year in a row, we have compiled data on the trademark portfolios of all 20 English Premier League (EPL) clubs, as well as the most valuable non-UK clubs and football players (by estimated transfer value). In last year’s research, we saw Manchester United pull ahead of Chelsea (both clubs had nearly identical portfolios in 2016) and Tottenham Hotspur overtake city rival Arsenal. While last year’s expansion of rights was mostly in Asian countries, this year many clubs sought extra protection in Latin America.

The prime example of this Caribbean and Latin American expansion is at Manchester United. In the past 12 months, the club has filed 77 new trademarks– with 18 of them at the Argentinian trademark office, 14 in Peru, 10 in Brazil, five in Chile, another five in Costa Rica and four in Uruguay. In all, then, approximately 72% of Man Utd’s trademark filing activity in the past 12 months was in the Latin American region – suggesting it sees strong growth, or filing gaps, in those jurisdictions. Similarly, FC Barcelona player Lionel Messi filed 30 trademark applications in the last year, all in his home country of Argentina (all single class word marks for his full name and surname).

Turning to the Premier League trademark rankings (full figures below), the results are starkly different from performance on the pitch. While Manchester City and Liverpool are fighting it out at the top of the ‘real world’ EPL, when it comes to trademark portfolios, Liverpool are far ahead (123 v 69) – although four other clubs (Arsenal, Tottenham Hotspur, Chelsea and Man Utd) are significantly in front of them. Indeed, the portfolio size of Liverpool and Man City appears to be small in relation to their brand value. For example, Manchester City’s brand value is estimated to be $1.3 billion; if you divide their total global trademark count (69) by their brand value, then each mark is protecting $19.3 million worth of brand. For comparison, the same sum is significantly smaller at Man Utd ($3.9m), Chelsea ($3.6m), Tottenham Hotspur ($3.3m) and Arsenal ($5.1m).

Of course, trademark protection doesn’t work that way in reality – but it is a reminder of the vast brand values that these clubs are protecting, often with relatively small portfolios compared to more traditional international companies with similarly-sized brand value estimates.

Elsewhere, we also looked at the trademark portfolio of the top 10 non-UK football clubs (by brand value), with Spanish clubs FC Barcelona and Real Madrid far ahead of their French, German and Italian rivals. A clear trend in recent years, however, has been the rapid growth of portfolios from some of the other European clubs. For example, in 2016, Atlético de Madrid had just 29 global trademarks (with a brand value of nearly half-a-billion dollars), and today it has 123. The same rapid growth can be seen at German club Borussia Dortmund (29 in 2016, 71 today), Paris Saint-Germain (108 in 2016, 182 today) and Juventus (112 in 2016, 179 today).

When it comes to the world’s leading football players, the trademark portfolio of Barcelona’s Lionel Messi – often heralded as the greatest player of all-time – is significantly ahead of the rest. With 106 filed or registered marks, Messi’s portfolio is now nearly double the size of Neymar Jr, his former team-mate and now rival, and long-time arch-rival Cristiano Ronaldo. Furthermore, for the first time, over 50% of the world’s leading players have at least one filed or registered trademark, confirming that a majority see the importance of protecting their own personal brands. That message was reiterated earlier in the week by Tim Vine, head of public affairs for The Premier League, at an event hosted by the UK Intellectual Property Office, who said: “The Premier League accounts for around £1.1bn in broadcast exports, which is bigger than the BBC, ITV, Channel 4, Channel 5, Sky and the independent sector combined… We also generate £7.6bn in gross value added to the economy every year – £3.3bn alone is in tax contributions. £1.1bn of that comes from the players, so despite their staggeringly huge wages, much of it goes back into the economy.”

Overall, then, the results (published in full below) reveal the significant sums that football clubs and players are worth in terms of brand value – and the need for registered trademarks to protect those assets. As today’s World Intellectual Property Day places the spotlight on IP in the sporting world, perhaps this awareness-raising effort will be a reminder to all clubs on the intangible assets that they have and must effectively protect. 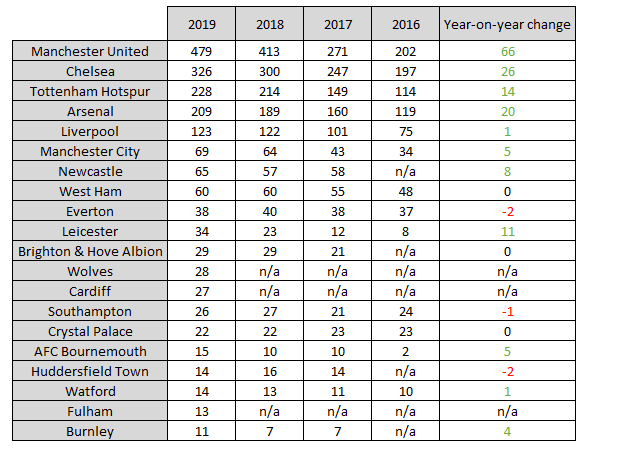 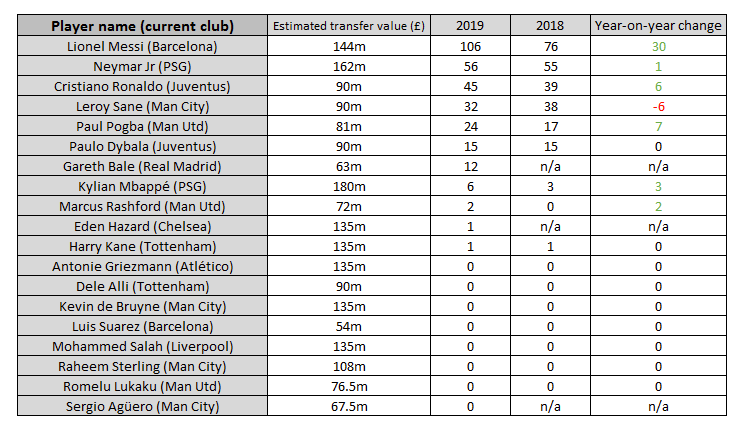