Not seeing through its charitable promises? The ACCC takes national eyewear retailer to court

The allegations include that Oscar Wylee engaged in misleading or deceptive conduct and made false or misleading representations pertaining to its Oscar Wylee charity initiatives, which included commitments to its consumers that "[f]or every pair purchased, a pair is donated to someone in need".

The ACCC alleges that Oscar Wylee has fallen very short of its promises.

What were the representations?

The ACCC allege that during the period of 13 January 2014 to 31 December 2018, Oscar Wylee represented to consumers that it would donate a pair of glasses to a person in need for every pair purchased at Oscar Wylee. More specifically, Oscar Wylee is alleged to have made the following representations:

The ACCC alleges that Oscar Wylee in fact only donated 3,181 glasses, despite selling 328,010 pairs of glasses during the period of 1 January 2014 to 31 December 2018. The ACCC also allege that of the glasses donated, none included prescription lenses and that Oscar Wylee only started donating glasses in significant numbers in early 2019. 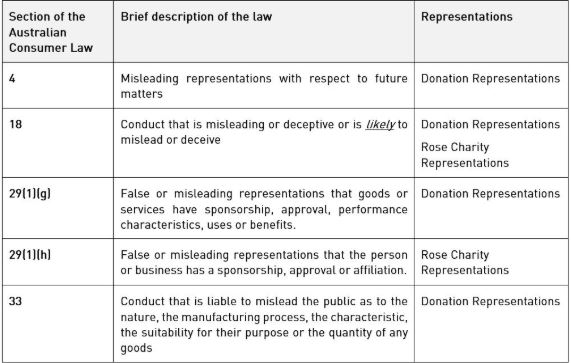 What relief is sought by the ACCC?

The ACCC is seeking a wide range of relief against Oscar Wylee – inclusive of declarations, pecuniary penalties, injunctions, corrective publication orders as well as orders compelling the undertaking of a compliance program.

What you can learn from the ACCC's allegations?