The new year begins with a divided Congress, which is already gridlocked over a funding agreement to end the partial government shutdown now entering its fourth week. With Democrats newly in control of the House and Republicans having gained a larger majority in the Senate, the odds of Congress enacting significant health policy legislation in the next two years are slim—and even “must-pass” legislation (like annual appropriations bills) may be fraught with challenges. Nonetheless, both chambers will hold healthcare-related hearings and mark up legislative proposals, with members increasingly focused on demonstrating their policy priorities in advance of the 2020 presidential race.

Major health reform activity in 2019 will be concentrated in the administration and the states—and the judiciary will play a significant role. Myriad healthcare-related lawsuits—ranging from disputes over the administration’s changes to provider reimbursement in the 340B Drug Discount Program to a multistate class-action lawsuit against opioid suppliers—are currently pending before the courts. Notably, a federal district court judge’s December ruling in Texas v. the United States that the Affordable Care Act (ACA) is unconstitutional will now proceed to an appeal (after being temporarily stayed). While it is highly unlikely that the ACA will be overturned as a result of this case, the district court decision sent shock waves through the healthcare industry.

House and Senate Dynamics. House Democrats’ midterm election campaigns focused heavily on protecting the ACA—a promise they will quickly look to fulfill. House committees will emphasize oversight and investigations of the Trump administration, including its actions to alter the Medicaid program via unprecedented Section 1115 waiver approvals and to deregulate the individual insurance market, as well as its unusual decision not to defend the ACA in Texas v. U.S. Senator Chuck Grassley (R-IA)—the newly appointed Senate Finance Committee chair—may join the Democrats in oversight hearings, although his focus is more likely to be on healthcare industry sectors and program integrity. 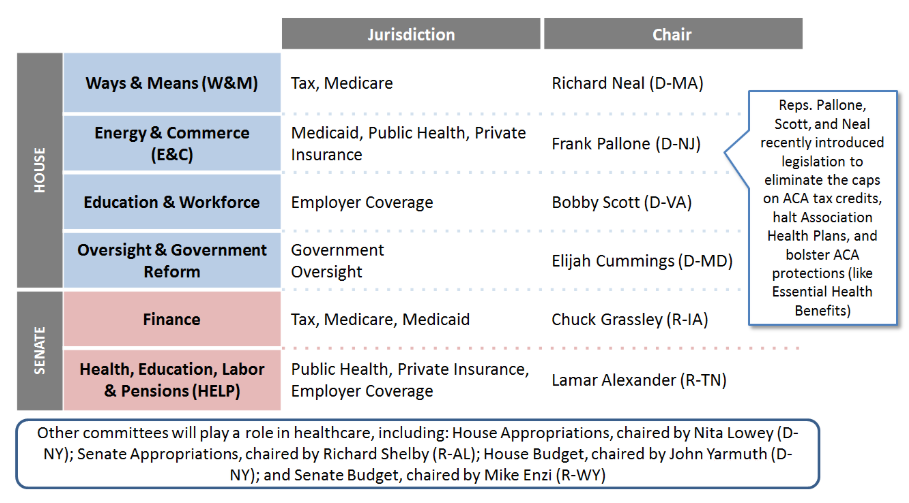 Federal Legislative Proposals That Could Gain Traction. There may be some issues on which the chambers can find common ground. Congress must—in order to avert automatic spending cuts that will otherwise take effect on October 1, 2019—address Budget Control Act-imposed budget caps that amount to $126 billion, making healthcare a likely point of discussion in budget-cutting efforts. Areas of potential bipartisan agreement include addressing drug pricing, Marketplace improvements, price transparency (for pharmaceuticals and other medical services) and “surprise” medical billing. Drug pricing is the one area of healthcare legislation that has the most promise for cooperation between the new House Democratic majority and President Trump. Of course, “most” is a relative term and whether such cooperation will emerge is difficult to judge, especially in the context of the current budget stalemate.

After Republicans failed to pass sweeping repeal and replace bills in 2017, and Department of Health & Human Services (HHS) Secretary Alex Azar assumed leadership, momentum to use regulations, guidance and waiver authority to alter health policy has accelerated. The administration will continue its efforts to review and roll back the previous administration’s regulations, and we will see a variety of policies that promote flexibility for states, providers and insurers.

Drug Pricing. Drug pricing remains a top priority, and much of the administration’s drug pricing agenda, outlined in its 2018 blueprint, does not require congressional action. Most prominent will be major changes to Medicare Part B drug reimbursement. We can expect further action this spring, although there is speculation that the administration may scale back this most controversial portion of its plans. All eyes remain on the promised initiative to remake the prescription drug market by possibly eliminating or curtailing the use of rebating in Medicare Part D. This plan, still under wraps, has been pending review within the administration since July, but strong support from HHS Secretary Azar suggests that we may see its release early this year.

Center for Medicare and Medicaid Innovation (CMMI). CMMI—led since last spring by Adam Boehler—is expected to ramp up activity in 2019 after a relatively slow start under the Trump administration. CMMI’s wide statutory powers allow it to be a chassis for differing administrations’ priorities. Boehler’s CMMI seems generally focused on encouraging provider risk models while reducing reporting complexity and upfront funding opportunities for provider “transformation,” relative to Obama-era designs. Perhaps most critical for the Trump administration is CMMI’s role in drug pricing reform, since CMMI has statutory power under the ACA to stage large-scale and mandatory tests of alternative payment methodologies. CMMI has begun to iterate on existing CMMI population health models, with more expected in 2019. For example, a new track of the Comprehensive Primary Care Plus initiative is expected soon, and is anticipated to pare down quality and other reporting requirements relative to the existing design and ramp up expectations for providers’ assumption of risk (in common with newly finalized Medicare Shared Savings Program rules). CMMI is also launching models in select areas, including the Integrated Care for Kids and Maternal Opioid Misuse models (for more information, see Manatt Health’s January 8, 2019 newsletter). Notably, HHS recently released a fact sheet designed to help stakeholders understand how the administration is advancing its “Value-Based Transformation” vision; the fact sheet provides a glimpse into the types of models the administration is likely to approve.

Medicaid. In 2018, the Trump administration carried out a clear policy vision and priorities for the Medicaid program, most notably through a slew of Section 1115 waiver approvals that undermine Medicaid as an entitlement health coverage program, including increasing Medicaid enrollee cost sharing, applying work requirements as a condition of eligibility and locking enrollees out of coverage for failure to comply with such requirements. Despite ongoing litigation about such waiver approvals and anticipated Democratic House oversight, Centers for Medicare & Medicaid Services (CMS) leadership remains steadfast in its position. The administration’s stance on whether it will permit other state flexibilities—such as block grant-like funding arrangements and “partial expansions” to below the ACA-established 138% of the federal poverty level—remains unclear. CMS is also likely to advance policy changes that emphasize accountability and program integrity this year, including efforts to improve and streamline 1115 waiver evaluations and bolster its data and reporting capabilities. CMS will also continue to work with states to help them address the opioid epidemic.

Marketplace and Individual Market Coverage. On the rule-making front, much of the initiative has shifted to the states to implement the short term, limited duration ("short term") and association health plan (AHP) rules that CMS finalized in 2018. The Health Reimbursement Account (HRA) rule—the third rule in the administration’s package to promote cheaper alternatives to ACA-compliant plans—is still under review. Two areas to watch closely in early 2019 are 1332 waivers and the 2020 payment notice. The administration doubled down on expanded 1332 flexibility for states in October guidance and a December discussion paper, suggesting that states could extend tax credits to short term plans and even replace tax credits entirely with a new form of health spending accounts (for more information, see Manatt Health’s December newsletter). The 2020 payment notice, which functions as an operations manual for carriers planning their 2020 product offerings, is more than a month late and could contain surprises, such as eliminating auto re-enrollment or “silver loading” practices. Either of those changes would be highly disruptive to the Marketplaces.

Following the midterm elections, the number of states with party “trifectas” grew; many states will enact reforms without bipartisan agreement, further emphasizing the divergent paths states have taken to address health policy. 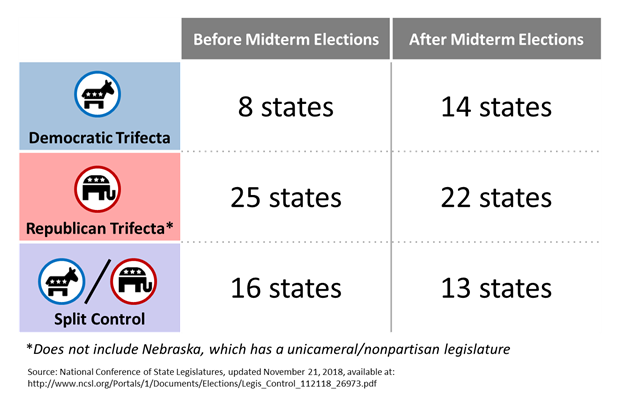 Medicaid. The midterm elections demonstrated clear voter support for Medicaid expansion, and this year Idaho, Nebraska and Utah officials will work to implement voter-approved Medicaid expansion referendums. Even states like Georgia and Mississippi—where conservative leaders have long opposed expanding Medicaid—are engaging in preliminary discussions about possible expansion models. While more Republican governors may support expansion in 2019, design features including premiums and work requirements and, in some cases, the source of program funding will be hotly debated in their state legislatures. Conversely, incoming Democratic governors in several states with waivers imposing work requirements and other new eligibility conditions will undo their predecessors’ policy choices. Maine Governor Janet Mills (D) is expected to quickly act to notify CMS that she will not implement Maine’s existing waiver approval as she moves to expand Medicaid in that state. In Wisconsin, Governor Tony Evers’ (D) path to altering the previous administration’s policies will be met by a Republican legislature that, in the lame-duck session, enacted legislation to significantly limit the new administration’s authority. On the Medicaid payment and delivery system reform front, more states are expected to pursue waivers that address social determinants of health, like North Carolina’s waiver approved in 2018. (For more information, see Manatt Health’s November 20, 2018 newsletter.)

Drug Pricing. Among the most-watched states for drug pricing policy changes is New York, where the primary vehicle for drug pricing changes is the Medicaid Drug Cap, which allows the state to impose enhanced transparency requirements and other penalties if a manufacturer does not agree to provide sufficient supplemental rebates under Medicaid. Many other states, such as California, Connecticut, Nevada and Vermont, have passed drug transparency laws that demand the reporting of information related to a drug’s costs and profits, and in some cases these laws require manufacturers to justify price increases. Other states may pass transparency legislation aimed at discouraging high prices and price increases. Some states are also likely to target pharmacy benefit manufacturers (PBMs), as Connecticut and Ohio did last year. Not all policies, however, will be as confrontational with the pharmaceutical and PBM industries. In 2018, the Oklahoma Medicaid program announced that it entered into value-based purchasing contracts with four different manufacturers, and other states such as Michigan have expressed interest in such arrangements. This trend is expected to continue in 2019 as states grapple with how to pay for new high-value, high-cost treatments such as CAR T and gene therapies.

Marketplace and Individual Market Innovations. Central to state health reform discussions will be proposals to stabilize and improve affordability in the individual insurance market. In 2019, states will continue to apply for federal support for reinsurance programs, and may also take advantage of the additional flexibilities offered under the new waiver concepts. States would be permitted to allow use of tax credits for non-ACA-compliant plans, reorganize state subsidies to target particular demographic groups or redirect subsidies to consumer-directed accounts, called Health Expense Accounts. States with an interest in promoting alternative insurance coverage under the auspices of affordability and choice—such as short term plans—are expected to apply for these waivers in the coming years. Conversely, many states will continue to consider and design state-sponsored buy-in (or “public option”) proposals. Under these proposals, the state leverages government bargaining power and administrative resources to provide a new healthcare coverage option that may be more affordable and/or accessible than current options in the individual and employer markets. For more information, see Manatt Health’s December 19, 2018 newsletter.