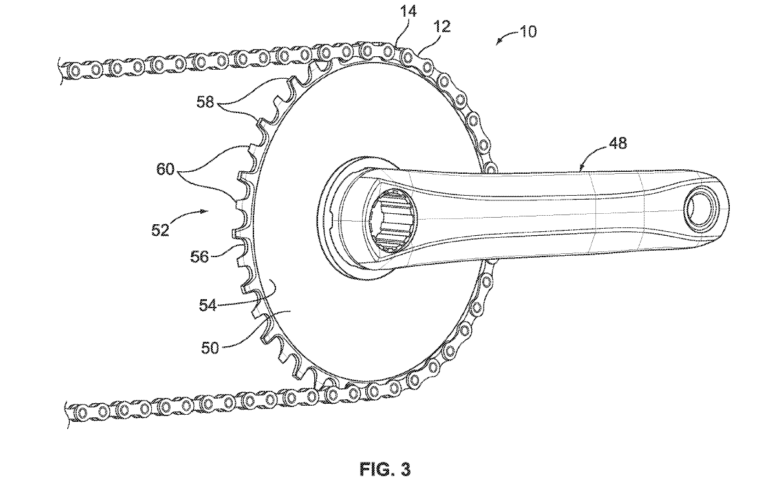 In Fox Factory Holding Corp. v. SRAM, LLC, Case No. IPR2016-01876 (April 2, 2018), the Patent Trial and Appeal Board (PTAB) found that Patent Owner’s extremely strong overall showing of objective indicia of non-obviousness overcomes Petitioner’s, at best, weak motivation to combine the references. Patent Owner has made a strong overall showing of objective indicia of non-obviousness, including industry praise, skepticism, and long felt need for all challenged claims 7–12 and 20–26, and a strong showing on commercial success for claims 11, 12, 25 and 26. Weighing all four Graham factors, the PTAB found that Petitioner has not shown, by a preponderance of the evidence, that the challenged claims would have been obvious over the combination of Hattan (US 3,375,022) and JP-Shimano (JP S56-442489).

The subject U.S. Patent No. 9,182,027 relates to a solitary chainring for use with a conventional chain in a bicycle drivetrain system that includes a bicycle crank.

Patent Owner argued that Petitioner’s rationale does not make sense, because Hattan already purports to solve completely the problem of chain retention for all operating conditions and that the combination of Hattan and JP-Shimano would have rendered Hattan unsatisfactory for its intended purpose. Decision pp. 15-16.

The PTAB were not persuaded that modifying Hattan in view of JP-Shimano would render Hattan unsuitable for its intended use, but the PTAB did find that the potential for problems in the operation of Hattan resulting from such combination weighs against the combination. The PTAB determined that Petitioner has only shown, at best, that the evidence weighs slightly in favor of making the above modification of Hattan in view of JP-Shimano. Decision p. 22.

To be accorded substantial weight, there must be a nexus between the merits of the claimed invention and the evidence of secondary considerations. There is a “presumption of a nexus” when a product is “coextensive” with a patent claim. Decision p. 23.

However, according to the PTAB, “Unclaimed features do not prevent the presumption of a nexus, but they may be the basis for rebutting the presumption. To do so, a person challenging patent validity must show that the commercial success, or other objective evidence of non-obviousness, was due to ‘extraneous factors’ including ‘additional unclaimed features.’ ” Decision p. 25.

As to commercial success, the PTAB found that Patent Owner has presented extensive evidence that its chainrings have achieved significant sales volumes, have achieved large sales growth, have grown to a majority of their chainring sales, and have allowed them to grow from a small share to a significant share of the single chainring market. Decision pp. 35-36.

As to industry praise and skepticism, the PTAB found that Patent Owner has presented extensive evidence of industry praise and awards that its chainring products have received and that Patent Owner has made a significant showing of skepticism within the industry towards the effectiveness of the chainring regarding chain retention as provided by the challenged claims. Decision pp. 40-41.

As to long-felt need, the PTAB found that Patent Owner has shown strong evidence that a long-felt need existed in the bicycle industry for improved chain retention that did not increase the known problems of complexity, weight, and/or drivetrain friction. Decision p. 44.

As to licensing, the PTAB found that licenses explicitly mentioning the ‘027 patent and not entered into to settle litigation are entitled to some weight. Decision p. 47.

As to copying, the PTAB found that Patent Owner has shown some copying of its chainring product, which is covered by the ’027 patent, and thus this evidence of copying overall is entitled to some weight. Decision p. 51.

In conclusion, the PTAB found that the case of obviousness here is easily outweighed by the strong objective evidence of non-obviousness. Decision p. 52.