Despite the COVID-19 pandemic, Thailand is continuing the trajectory of economic and regulatory development that has characterized it in recent years. In October 2019, it jumped an impressive six places year-on-year in the World Bank’s Ease of Doing Business Index, rising from 27th to 21st out of 190 economies.

The index is judged on a number of factors ranging from taxation to licensing, and property rights to insolvency. In Thailand’s case, it is hard evidence of ongoing regulatory reforms, growing investor confidence and the government’s proactive response to shifting regional politics, maximizing opportunities for existing or would-be participants in the Thai economy.

But Thailand isn’t the only Southeast Asian country keen to cut through the regulatory red tape to stimulate economic growth. According to the World Bank, Thailand is currently the fifth-easiest Southeast Asian country to do business in, and is surrounded on the index by close competitors Japan, Malaysia and Taiwan. All of these are outdone by Hong Kong and Singapore, who rank third and second globally.

In an effort to further enhance Thailand’s competitiveness in the region, the Thai Government recently proposed a number of amendments to two key pieces of legislation, namely, the Civil and Commercial Code (“CCC”) and the Act Determining Offences Relating to Partnerships, Companies, Associations and Foundations (“Act Determining Offences”). These proposed amendments(collectively, the “Proposed Amendments”), which, in part, clarify and streamline a number existing regulatory processes, including company formation, were approved by Thailand’s Cabinet on 26 June 2020

While some of the proposed amendments are more significant than others, they are all a step in the right direction in terms of providing additional clarity for anyone wishing to do business in Thailand. A brief high-level summary of the Proposed Amendments is set out below.

New Merger Provisions: Currently, the CCC only permits company amalgamations, i.e. the combination of two or more companies into a newly formed entity, which assumes the combined assets and liabilities of both companies (A+B=C). An amalgamation is distinct from a merger because neither company involved survives as a legal entity. On the other hand, with a merger, two companies (A+B) are merged into a single company (either A or B), with the remaining company (either A or B) being liquidated by operation of law. The Proposed Amendments introduce the concept of a merger into Thai law – so that interested companies now have the choice to either undertake a merger or an amalgamation. 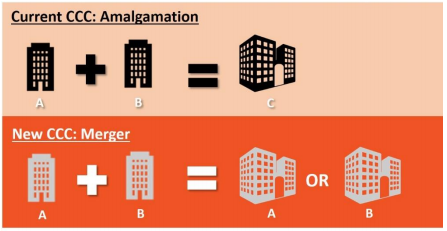 This change is a significant development in Thai corporate law and will no doubt allow business owners increased flexibility and will pave the way for more innovative and tax-efficient business restructurings and merger and acquisition transactions in Thailand in the coming years. The precise details of the new merger law will become clearer once the Proposed Amendments are debated and refined during the next stage of the approval process (see “Timing Considerations” below).

Company Formation: Currently, a minimum of three individual persons (knows as “promoters”) are required to form a new company in Thailand. Once the new company is formed, the promoters become the company’s initial shareholders. Under the Proposed Amendments, the number of promoters required to form a company (and the minimum number of shareholders that a company must maintain at all times) will be reduced from three to two. Although this may not seem like a significant change, it will no doubt be viewed by many as a welcome simplification of the company formation process – as business owners, particularly foreign companies, small businesses, and startup enterprises, often complain that finding three individuals to act as promoters of a new company (and maintaining a minimum of three shareholders at all times) is unduly burdensome.

It should be noted, however, that this is not the first time that the CCC has been amended to reduce the number of promoters required to form a new company (and the minimum number of shareholders that a company must maintain at all times). When the CCC originally came into force in 1925, seven promoters (and, therefore, a minimum of seven shareholders) were required. This “seven promoters/shareholders” requirement, which is likely to have been borrowed from the company law of civil law jurisdictions in Europe in the early 20th century, was only reduced to the current three promoters/shareholders requirement in 2008 (the “2008 Amendment”). There is little doubt that the fewer promoters/shareholders required, the easier the company formation process will be. Accordingly, these Proposed Amendments will be welcomed by the business community in Thailand and may lead to a significant increase in the number of new company registrations, as indeed was the case with the 2008 Amendment.

Quorum Requirements for Shareholders’ Meetings: In line with previous decisions of the Thai courts and rulings by the Department of Business Development and the Council of State, respectively, the Proposed Amendments provide that a minimum of at least two shareholders (or their proxies) must be present at any shareholders’ meeting in order to constitute a quorum.

Period for Payment of Shareholder Dividends: In 2017, the National Council for Peace and Order (the name of the military junta that ruled Thailand from its 2014 coup d'état on 22 May 2014 until 10 July 2019) issued Order No. 21/2017 (the “NCPO Order”) which provided, among other things, that shareholder dividends must be paid within one month from being approved by a company’s shareholders or by its board of directors, as the case may be. Prior to the NCPO Order, there was no timeframe specified for the payment of dividends to a company’s shareholders. Accordingly, this one-month period was implemented to protect the interests of shareholders. The Proposed Amendments will ensure that this onemonth payment period is formally enshrined in the CCC.

Dispute Resolution Mechanisms: The NCPO Order also permits a company to include mechanisms in its articles of association for dealing with disputes between its directors and its shareholders. The Proposed Amendment will ensure that this matter is formally enshrined in the CCC.

Penalties: The Proposed Amendments supplement the provisions of the Act Determining Offences to impose penalties on a company for failure to pay shareholder dividends within the specified one-month period and for failure to comply with the notice requirements to call for a shareholders’ meeting in connection with a merger.