Luxembourg is modernising its securitisation law

The Luxembourg law on securitisation dated 22 March 2004 (the “Securitisation Law”) has been tremendously successful in providing a flexible and secure framework for Luxembourg securitisation vehicles (“SVs”), attracting a wide range of structures and satisfying various investors’ needs. With the entry into force of the EU securitisation regulation (EU) 2017/2402 of the European Parliament and of the Council of 12 December 2017 (the “Securitisation Regulation”), and an evolving market requiring more flexibility, new products and new players, the Luxembourg legislator has taken the opportunity to put forward some long-awaited changes to the Securitisation Law. The corresponding draft bill number 7825 (the “Draft Bill”) has recently been published. 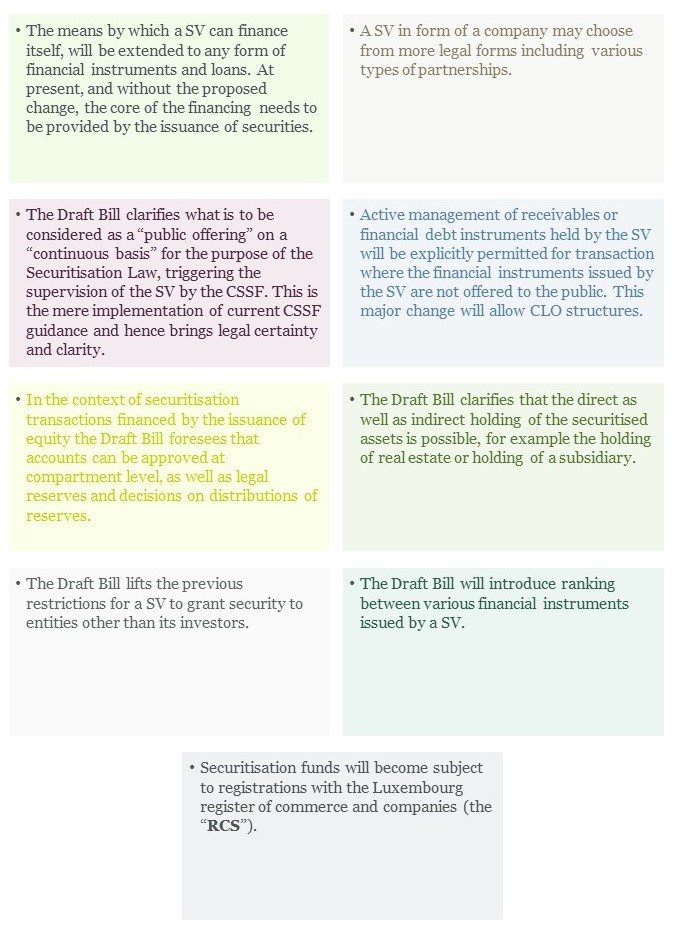 Loans and financial instruments as new means of financing

The current version of the Securitisation Law provides that a SV can only finance itself through the issuances of "securities".

The Draft Bill proposes to extend the means of funding to:

Adding “financial instruments”, is in essence a reflection of what has been discussed and already accepted in the market. By way of example, German law governed promissory notes, so called Schuldscheine, which do not fall under the narrow definition of securities under their governing law have been used in securitisation transactions to the extent that their (contractual) features were similar to those of securities, i.e. being freely transferable. The proposed change would add legal certainly and open up the funding to other forms of financial instruments. Adding “loans” to the allowed means of funding is a very welcome and important change. Currently financing via loans is only allowed (i) to the extent it is proportionally less than the funding via securities and (ii) for specific purposes, for example to provide financing in the warehousing phase (for a limited period of time) or as an additional liquidity line to cover any shortage of liquidity during the lifetime of the transaction.

Allowing financing via loans is a new and highly attractive addition which will entice investors, preferring to invest in loans instead of securities, to consider securitisation transactions. In particular, this will render Luxembourg SVs more attractive for the securitisation of trade receivables, which are often financed via loans.

The following additional corporate forms will be available for SVs:

The Draft Bill will implement a clarification regarding the criteria of “offer to the public” and “on a continuous basis” for the purpose of the Securitisation Law. These criteria trigger approval and supervision of a SV by the CSSF. The proposed clarification reflects in essence existing CSSF guidance. In case of more than 3 issues per year to the public, the SV is considered to issue on a continuous basis. Furthermore the public character of the offer or issuance is being determined as one which cumulates the 3 following criteria: (i) the issuance is not addressed to professional clients, (ii) the financial instruments have a denomination lower than 100.000 Euros, and (iii) the financial instruments are not distributed in a private placement.

Currently, the CSSF guidance refers for a safe harbour regime to a denomination of 125.000 Euros. This figure would now be reduced to 100.000 Euros and aligned to the exemption under the prospectus laws and regulations.

The Draft Bill introduces the explicit possibility for a SV to actively manage debt portfolios for as long as the related financial instruments issued by the SV are privately placed. The SV could actively manage those assets itself as well as outsource the asset management to a service provider, i.e. an asset manager.

Currently the CSSF guidance allows passive management of assets. This contemplated change will therefore have a significant impact on the market as it has the potential to bring CLOs back to Luxembourg. It may also enhance certainty on this matter with respect to repackaging deals.

The existing compartment rules for debt instruments are being applied more consequently to securitisations financed by the issuance of equity. For example the balance sheet and profit and loss accounts for a specific compartment can be approved by the shareholders of the relevant compartment only. The determination and the distribution of the revenues and reserves can be made at compartment level.

Direct and indirect holding of assets

The Draft Bill clarifies that a SV may hold, directly and indirectly, the securitised assets. This means, for example, that the direct holding of real estate by a SV or via a holding subsidiary of the SV would be explicitly permitted. These structures are the subject of debate under the Securitisation Law.

Currently the Securitisation Law only allows the granting of security interest by a SV in favour of its direct creditors or its investors. Hence, in case of leveraged financings a SV assuming a junior tranche of a financing is currently not able to grant security interest to a senior lender. Furthermore in group scenarios where the SV’s parent entity received financing which is ultimately passed down to the SV, the SV cannot grant any security interest to the lender.

The proposed change will allow the SV to grant security interest to secure obligations in relation with the securitisation transaction and would hence broaden the scope.

Legal subordination to be implemented in the law

The Draft Bill provides for the required flexibility on this matter, i.e. it is possible to deviate from this legal subordination, by providing for other rules in the relevant constitutional documents or relevant contracts.

The Draft Bill does not directly include any specific tax measure regarding SVs, which benefit already under the Securitisation Law from a very appealing tax regime. Indeed, SVs established as corporate vehicles may be able to fully deduct from their taxable base commitments or distributions made to shareholders or investors (e.g., noteholders, bondholders etc.) without triggering any Luxembourg withholding tax, regardless the location of the shareholders and investors. Further, as SVs established as corporate vehicles are fully taxable, they may be eligible to double tax treaty access and EU directives. Finally, management services to SVs may generally rely on a VAT exemption.

Considering the additional flexibility and opportunities foreseen by the Draft Bill, including active management in some instances, a wider use of SVs is expected that may benefit from the previously mentioned tax regime.

In circumstances where SVs in the form of corporate vehicles would not be required or even desired, SVs may currently only be established as a securitisation fund, not always considered as a very interesting vehicle from the perspective of the sponsor or investor. The Draft Bill introduces the possibility of establishing the SV in the form of another tax transparent vehicle, such as the very successful common limited partnership or special limited partnership, which will certainly improve the use of tax transparent SVs in the future.

Next steps and timing