China’s open door policy is further opening up to welcome the world for business. The country is now building a landmark megalopolis on its southern coast with the name the “Greater Bay Area” (the “GBA”). The GBA connects Hong Kong with 11 surrounding cities in southern China including Shenzhen, Guangzhou and Macau. The GBA’s super economy is comparable to the economy of the San Francisco Bay Area and the projected total GDP is expected to reach US$4.6 trillion by 2030.

Business opportunities are expected to grow exponentially in the coming years as a result of increased flows of people, goods and capital within the GBA, as well as between the GBA and the regional and international markets. Leveraging on the “one-country, two-systems” advantage, Hong Kong has the unique strength as an extraordinary international business and financial center supported by a robust common law based legal system and laissez-faire economy which will act as the backbone and bloodline of the GBA, enhancing the city’s role as a “super connector” by linking the GBA as well as the rest of China to the world markets.

What Is The GBA? 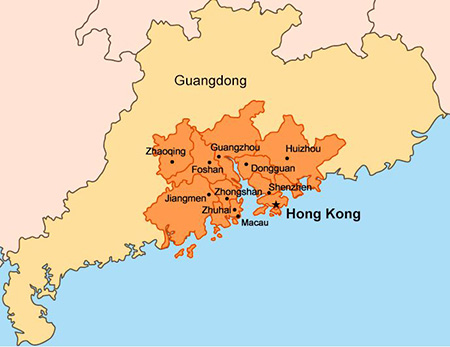 The development of the GBA is a national-level plan which was initially conceived under the Belt and Road initiative for economic development and was later included in China’s 13th Five Year Plan. In July 2017, the National Development and Reform Commission of the PRC, the Hong Kong Special Administrative Region Government, the People's Government of Guangdong Province and the Macau Special Administrative Region Government signed the Framework Agreement on Deepening Guangdong-Hong Kong-Macau Cooperation in the development of the GBA. The objective of the Framework Agreement is to implement the principle of “one-country, two-systems”, to establish a mutually complementary cooperation relationship and to jointly take forward the development of the GBA. The GBA consists of three core cities (Hong Kong, Shenzhen and Guangzhou), seven other cities in the Guangdong province (namely Zhuhai, Foshan, Huizhou, Dongguan, Zhongshan, Jiangmen and Zhaoqing) and Macau. Hong Kong and Macau are special administrative regions of China, each with their own mini-constitutional document called the Basic Law, as a result of the colonial history of these two cities.

With a total area of approximately 56,000km2 closely connected by highways, high speed railways and ports and a population of approximately 67 million people, the GBA is expected to strengthen the cooperation among the cities within it to maximize their own existing advantages in building a large-scale and vibrant city cluster. A few examples, Hong Kong is an international financial centre and legal hub which strategically acts as an international business and financial gateway to and from mainland China in the GBA; Shenzhen is an international technology and innovation center as China’s Silicon Valley where China’s internet giants, China’s largest telecommunication equipment manufacturers, and the global market leader in drones, are all based. Many of the world’s best selling smartphones and tablet devices are also manufactured and assembled in Shenzhen. Further, Macau is known to be both an international cultural hub and the Las Vegas of Asia with its distinctive gaming industry. The Guangdong province within the GBA generally focuses on modern technology industries such as computers, communications and other electronics equipment as the leading sector, followed by the manufacturing industry ranging from goods such as electrical machinery technology equipment, and electric (and soon to arrive autonomous) automobiles.

The GBA essentially helps China widen its doors to foreign businesses. Hong Kong will continue to play a leading role as the super connector by acting as the international gateway for foreign investors to access the GBA as well as other parts of China in addition to other countries contemplated in the Chinese government’s Belt and Road initiative of economic development.

From a legal standpoint, the GBA presents unique opportunities and challenges. The GBA is the only bay area in the world and one of the largest economic zones comprising of three separate legal jurisdictions operating within the same country. To illustrate, the nine cities of the Guangdong province operate under the PRC civil law system. However, Hong Kong and Macau have their respective mini constitutions under the “one-country, two-systems” principle and therefore have legal systems independent from mainland China. Hong Kong retains the common law system inherited as a former British colony whereas Macau’s legal system is broadly based on Portuguese civil code and its laws continue to operate within the framework of the continental civil law system.

As a result of clashes of various legal systems, currencies and business practices, Hong Kong offers an unrivalled competitive edge for the GBA economy. It is expected that Hong Kong will continue to be a preferred venue for foreign and mainland Chinese investors to set up corporate structures in Hong Kong to hold ventures in China or as a stepping stone for Chinese outbound investment around the world. These Hong Kong governed holding structures typically enjoy greater flexibility compared to their Chinese counterparts due to Hong Kong’s free economy practices, regulations and policies. Access to financing from international and the PRC markets is also relatively convenient under Hong Kong’s mature, western-style international banking, finance and regulatory system.

CEPA and the GBA

Hong Kong currently enjoys a unique advantage under the Mainland-Hong Kong Closer Economic Partnership Arrangement (CEPA), which was signed in June 2003. In June 2017, Hong Kong and mainland China further signed two new agreements, namely (1) the Investment Agreement, which extends the preferential treatment to cover investment in non-service sectors (including manufacturing, mining and investment in assets) in addition to trades in goods and services; and (2) the Agreement on Economic and Technical Cooperation, which promotes economic and technical cooperation and sets the direction to deepen economic cooperation within the GBA. Further, government policies and economic partnering arrangements at both national and local GBA levels are expected to be introduced in the coming years to fully and better implement the plan to build the GBA into a super economic zone.

On the tax front, the “Arrangement for the Avoidance of Double Taxation on Income and Prevention of Fiscal Evasion” (DTA), which was launched in 2006 and further revised versions throughout the last decade, has continued to add incentives for foreign investors to enter the GBA through Hong Kong. Under the DTA, Hong Kong holding companies are tax exempted when disposing of less than 25% of shareholding in a Chinese company of which assets are not mainly comprised of immoveable property situated in China. Hong Kong companies also enjoy the lowest withholding tax rate as compared to companies of other jurisdictions for dividends, interest and royalties derived from a Chinese operating subsidiary.

Hong Kong continues to be recognized by the international community as “Asia’s world city” and as the largest source of foreign direct investment in China. Hong Kong also has one of the highest concentrations of banking financial institutions and MNCs from around the world, with top US, Chinese and European banks operating in the city. MNCs with their Asia headquarters in Hong Kong enjoy a familiar business environment and culture, a simple and low tax regime, an efficient business infrastructure and world-class financial and professional services.

On the legal front, Hong Kong has a large concentration of local and international legal talents residing in the city, with experienced lawyers and judges from jurisdictions such as, the US, UK, EU, Australia, Canada, China and various parts of Southeast Asia. The unique legal talent pool can provide a comprehensive one-stop solution to help international businesses navigate the multi-jurisdictional and multi-disciplinary nature of business opportunities that the GBA presents within and outside China.

Within the GBA, Hong Kong will continue with its distinctive role and act as an international legal, financial and corporate hub. As a result, it is envisioned that Hong Kong will serve the GBA in a way that is similar to how San Francisco collaborates with the Silicon Valley from a finance and talent pool standpoint. From a legal and corporate infrastructure standpoint, Hong Kong is expected to play the role of a corporate and dispute resolution hub, similar to that of Delaware for corporate America. From an international capital markets standpoint, Hong Kong is envisaged to be the New York of the Asia-Pacific Region.