• Annual revenues of less than $100 million and either:

− No public float or

For reporting companies, the date for determining public float is the last business day of the issuer’s most recently completed second fiscal quarter, while for companies filing an initial registration statement, public float is to be determined as of a date within 30 days of the date of the filing of the registration statement. In both cases, annual revenues are as of the most recently completed fiscal year for which audited financial statements are available.

Once an issuer determines that it does not qualify as a smaller reporting company, it will remain unqualified unless when making its annual determination either it determines that:

• Its public float was less than $200 million or

• Its public float and its annual revenues meet the requirements for qualification included in the following chart: 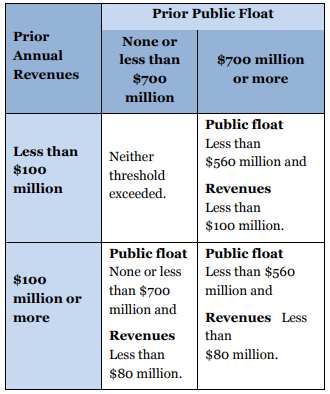 In their comments on the proposed amendments, market participants, trade groups and various SEC advisory groups had noted that the threshold for triggering the Section 404(b) auditor attestation requirement ought to be reevaluated given that for many smaller reporting companies the requirement may be unduly burdensome. In the SEC’s open meeting, Commissioner Piwowar and Commissioner Peirce both addressed the importance of reevaluating the threshold triggering the Section 404(b) auditor attestation requirement, with Commissioner Piwowar noting that changes to the accelerated filer definition “are inextricably linked to the [smaller reporting company] regime”4 and Commissioner Peirce noting that “Section 404(b) of Sarbanes-Oxley” is “the most glaring burden on small issuers.”5 In the adopting release, the SEC noted that Chairman Clayton “has directed the staff to formulate recommendations to the SEC for possible additional changes to the ‘accelerated filer’ definition that, if adopted, would have the effect of reducing the number of registrants that qualify as accelerated filers” and, as a result, reverse, or at least lessen, the impact of the SEC’s changes to the definitions of accelerated filer and large accelerated filer.

Rule 3-05 of Regulation S-X sets forth the requirements for when financial statements of a newly acquired business or a business to be acquired must be provided in Securities Act and Exchange Act filings.

The SEC has amended Rule 3-05(b)(2)(iv) to allow registrants to omit financial statements for the earliest of the three required fiscal years if the net revenues of the business to be acquired are less than $100 million, up from $50 million in the current rule. This rule change applies to all companies, not just smaller reporting companies.

In order to make informed decisions for the future, existing smaller reporting companies should consider the new qualification thresholds, particularly those issuers that were close to the current thresholds for losing their status or may lose their status based on the current definition and their annual determination as of the end of the second quarter (June 30, 2018, for most companies). The changes could allow these companies to benefit from the revised smaller reporting company thresholds, particularly the scaled disclosure requirements, for some time going forward.

When the SEC adopts new or revised rules, it is not unusual for the staff of the Division of Corporation Finance to issue interpretations to help issuers navigate the new provisions. Smaller reporting companies, under either the existing or the revised definitions, should monitor any developments in this area.

Finally, all issuers, whether or not smaller reporting companies, will need to revise the cover pages of various forms that they file with the SEC after the effective date of the revised rules. For most companies, this change will need to be reflected beginning with the Form 10-Q that is to be filed for the quarter ending September 30, 2018.