The European Patent Office (EPO) 2018 Annual Report was published this month showing current trends in the use of the system, as well as how the system is performing against quality control markers.

The US continues to be the greatest user of the system in terms of number of new European patent applications (25% of new filings), with Germany and Japan coming in second and third (15% and 13%, respectively, of new filings). The UK accounted for only 3% of new filings, although the percentage increase compared to 2017 figures (+7.8%) was almost 3 times that of the US (+2.7%). At +13.0%, Korea showed the greatest percentage increase, whilst still only accounting for 4% of new filings. Interestingly, the grant rate largely mirrors the filing rate and 24% of patents granted by the EPO originated from the US, and 17% from Japan.

According to the results of customer surveys, the EPO has broadly maintained its 2017 satisfaction ratings with both search and examination and formalities services: 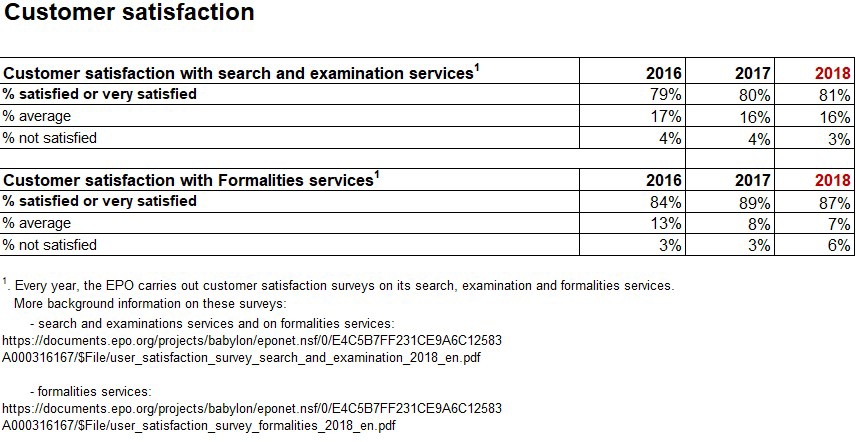 Following the launch of its ‘Early Certainty’ initiative in 2014, in July 2016 the EPO reported that they had reached the target they had set of delivering all search reports (with written opinions on patentability) to applicants within six months of the filing of their application with the EPO. In 2016, they then turned to the examination and opposition phases of the patent procedure and their aim is that by 2020 the examination procedure will be concluded in just 12 months on average. By 2020, the EPO also aims to cut the overall duration of the opposition procedure for straightforward cases to within 15 months and, to this end, they introduced the streamlined opposition procedure in July 2016.

The 2018 Annual Report shows that the search procedure continues to perform well and the average duration of opposition procedure has moved closer to the 15 month target. Further improvements still need to be made in the examination and opposition phases, if the 2020 targets are to be met:

No figures for satisfaction specifically with opposition services are reported. The figures relating to the outcomes of oppositions for 2018 remain virtually unchanged from 2017 however:

Whilst the EPO considers early certainty to be a key quality indicator, this may not be a priority for all applicants and, in fact, a slower prosecution and/ or opposition may be favoured in some circumstances. However, all users of the EPO services will be united in wanting a high quality of work product from the EPO and early certainty should not be at the cost of this. It is hoped that meeting the challenging 2020 targets for the examination and opposition phases will not have this consequence.