New Zealand is often overlooked, literally. There are numerous examples of the country being left off world maps and media representations of the world, much to the annoyance of its government and residents. It is eclipsed most times by its “neighbour” Australia (over a 3-hour flight away), who’s population is five times larger and not surprisingly has a much busier trademark register. IP Australia recorded 79,490 trademark applications filed in 2018, whereas New Zealand had 24,546. However, the small island country has accomplished something that most countries have yet to do: becoming a brand in itself.

New Zealand has an export heavy economy, which represents about 30% of its GDP, and tourism is the largest contributor to this. For the year ended March 2018 international tourism expenditure contributed 20.6% to New Zealand’s total exports of goods and services. The country’s tourism industry was not always so successful, but a major marketing campaign helped to grow this part of the economy (see graph below). 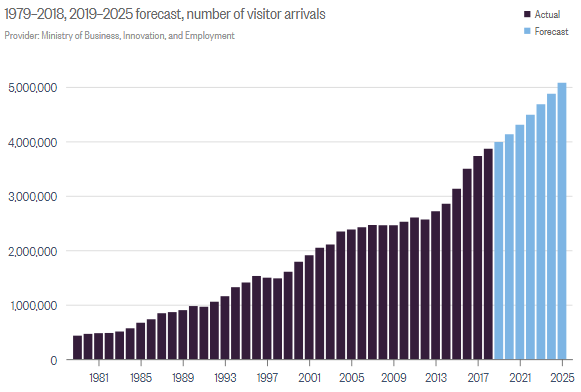 ’100% Pure New Zealand’ was launched as a global marketing campaign in 1999, one of the first of its kind. The goal was to propel New Zealand onto the world stage and show what the country had to offer. In the year to the end of June 2000, visitor numbers rose 10% and visitor spending was up by 20%.

The following year saw the first instalment of the Lord of the Rings film trilogy hit the big screens, with the slogan cannily changed to ‘100% Middle-earth, 100% Pure New Zealand’. In fact, this  legacy brand has been adapted numerous times to attract different travellers. The most recent initiative is ‘100% Pure Welcome, 100% Pure New Zealand’ As part of this campaign 300 locals will be sharing a ‘good morning’ message aired through various advertisements, in part to celebrate the fact that the island country is the first to see the sunrise.

Partnerships have been another important contributor to growing tourism levels, with Tourism New Zealand pairing up with national carrier Air New Zealand. Since their cooperation began the value of international tourism to New Zealand has grown from $10.4 billion to $16.2 billion. Most recently they have extended this relationship to include Air New Zealand’s alliance partner United Airlines to launch a campaign to attract more US visitors. As it stands, of total arrivals between August 2018 to July 2019, Australians make up the most tourists, trailed behind by China and the US.

Air New Zealand is one of the most reputable brands in the country, receiving the top spot on the corporate reputation index ranking. It has, however, recently been caught up in controversy due to a trademark issue. The company filed an application for a ‘Kia Ora’ logo. The name of its inflight magazine, the phrase is also a term that is a Māori greeting for ‘hello’. There was a strong backlash from the indigenous community, which called for a boycott of the airline and also threatened legal action. Within a week Air New Zealand announced that it would not actively pursue the application, but it would not withdraw it. It remains to be seen whether this, along with a statement from the CEO, will be enough to mend the reputational damage.

Plenty of opportunities for local and multinational brands

Alongside this growth in tourism, New Zealand has experienced solid economic growth and is expected to continue on an upward trend over the next five years (see graph below). 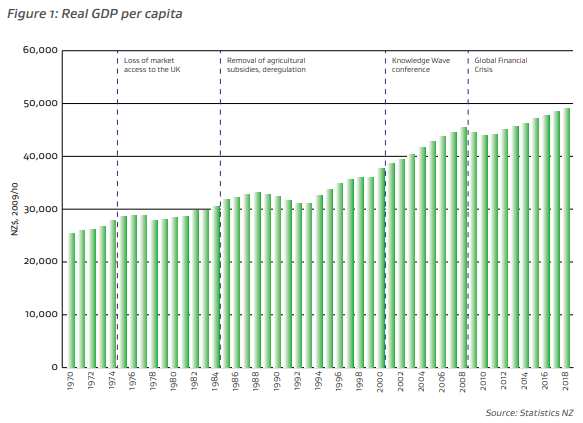 Source: From the Knowledge Wave to the Digital Age

However, the government foresees potential problems with its current economic model. It has been falling behind other countries when it comes to productivity performance and is too reliant on foreign funding for financing of spending and investments. This makes the economy vulnerable to the ups and downs of the global economy. Further, the government has become dependent on high levels of net migration, which has meant less focus on growing out promising new sectors. Thus, investing in R&D has become a high priority for the administration – and may result in the growth of new types of businesses (and new IP owners seeking support and services).

From a trademark perspective, we can see that applicants are currently most concerned with seeking protection in class 9 (mainly apparatus and instruments for scientific or research purposes, audio-visual and information technology equipment, as well as safety and life-saving equipment), class 35 (business services; retail) and class 41 (education; entertainment; sporting events) (see graph below).

There have been some distinct shifts in filing behaviour with class 5 (pharmaceuticals), class 16 (paper, cardboard, etc) and class 25 (clothing) obviously dropping in importance. The low level of applications for class 25 is notable considering it is generally considered an important class in other registers. Class 35 (business services; retail) has leapfrogged class 9 to become the most frequently covered class, and class 41 (education; entertainment; sporting events) has also experienced significant growth. 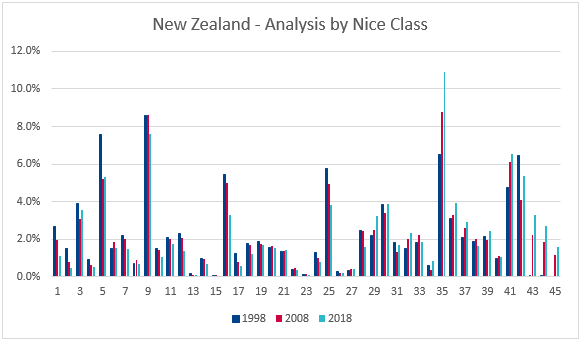 We can see the value of exports through an analysis of New Zealand brand’s filings domestically compared to foreign filings (see graph below). Local companies utilise service class marks much more often domestically than they do abroad. Further, the food and drink classes (29-33) are important export classes for New Zealand based brands, observes CompuMark’s director of custom and managed solutions Robert Reading.

Class 20 covers food from animal sources and class 33 addresses alcoholic beverages. Class 5 is the most important export class, and China accounts for 30% of this volume. Typically, these are dairy-related products sold as a dietary supplement. High levels of trademarks relating to dairy are likely to continue as the government sees these products as driving the export industry in the future (along with tourism).

The top foreign registers for New Zealand brands in 2018 were China (1,531 trademark applications), Australia (1,017) and the US (700). Incidentally, these are also the key export markets. 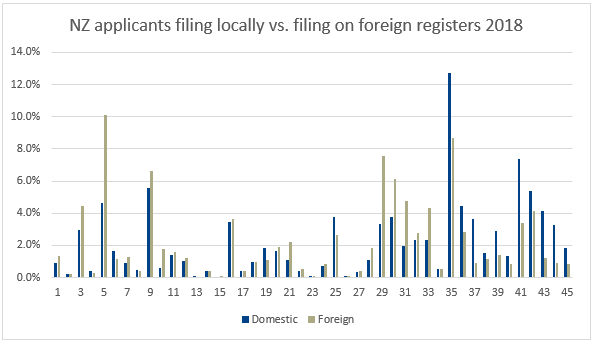 AJ Park is the most active law firm when it comes to application filings in the country (see chart below). In 2018 it dominated the filings, with as many trademark applications as the next four largest filers combined (see chart below). DIY TM is a notable appearance in this chart as it is a self-filing website.

When it comes to foreign applicants, the register shows it is a highly developed economy with large multinationals seeking protection there (see chart below). Only a few of the top corporate filers in 2018 were local brands.

The New Zealand trademark register has seen significant growth since joining the Madrid system at the end of 2012 (see graph below). 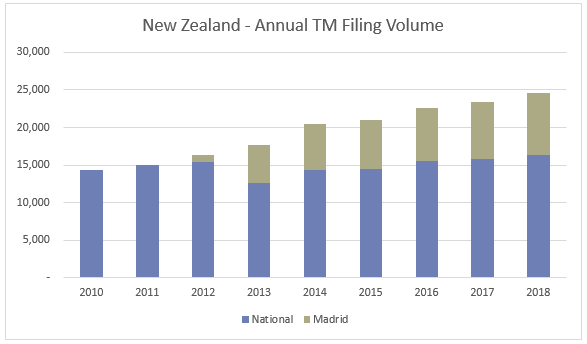 Foreign applicants are now increasingly using the Madrid system to designate New Zealand as part of an IR filed through WIPO rather than filing national applications. IR designations now account for one third of all trademark applications in New Zealand, and since 2014 have been the preferred route for foreign brand owners seeking trademark protection in the country, says Reading (see graph below). 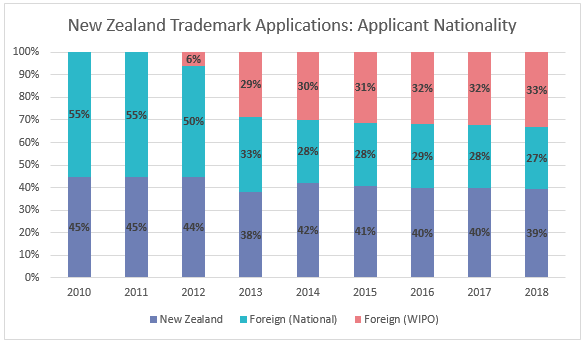 New Zealand has put itself on the map with a savvy marketing strategy. By becoming a brand in itself it has grown its tourism numbers and brought life to the industry. While some people have disagreed with the ‘100% Pure New Zealand’ slogan, as it makes the country appear environmentally friendly when that is not always the case, it does manage to embody the New Zealand spirit and experience. This has done wonders to attract nature, and Lord of the Rings, enthusiasts, and everyone in between.

The island country has built a strong reputation, not just in tourism. It is consistently recognised for its stable and business friendly environment, topping the World Bank Doing Business report in 2018 for ease of doing business and starting a business. The country has further grown its trade network and has free trade agreements with 16 WTO members. This is a positive for both local and international businesses. As Asia becomes an increasingly important market New Zealand will likely become an even more attractive destination for foreign entities, and we can expect more brands to seek protection there.