Corporates should leverage growing carve-out and divestment activity across the European market with a strategic approach to deal making.

In the current deal market, corporates are taking an increasingly strategic and value-centred approach to planning carve-outs and divestments in order to maximise value. According to advisory firm EY, 84% of corporates questioned in late 2018 said they plan to divest an asset within the next two years, up from 20% in 2015. Streamlining operating models and managing a unit’s position in the market are most commonly cited as triggers for divestment. While financial distress can be a factor, EY’s findings demonstrate the analytical approach corporates are taking to divestments. This is echoed in recent deals we have advised on, including Telenor’s sale of its Central and Eastern Europe Business to PPF Group and Allergan’s sale of its global generic pharmaceuticals business to Teva. 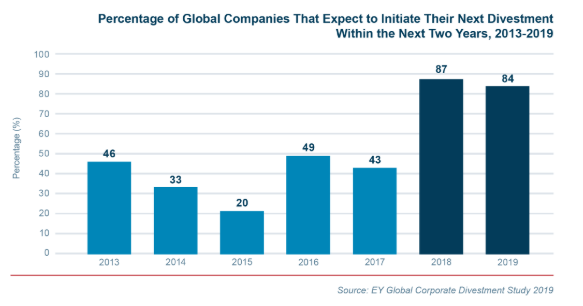 In our view, corporates should approach each step of the carve-out process with two key factors in mind — what drives value in the carved-out business and how such value drivers will translate once the business is in the buyer’s hands. 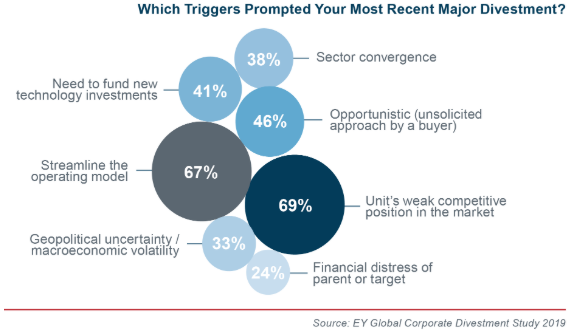 Regulators and Activists Are Additional Drivers of Carve-Out Activity

According to Thomson Reuters, there were 31 M&A deals with a value of more than US$5 billion in 2018, up from 17 in 2016. These large-cap M&A deals have fuelled carve-out activity across Europe, as complex transactions frequently require pre-merger divestments for regulatory approval. Regulatory concerns, combined with heightened national security scrutiny in sectors that were formerly not considered “sensitive”, has led to a growing number of transactions that are cleared subject to some kind of remedy — typically taking the form of a divestment. Post-merger divestments have also become more common, as corporates streamline and seek to optimise shareholder value by aligning the newly merged business with a new strategy or divesting non-core businesses to aid de-leveraging. 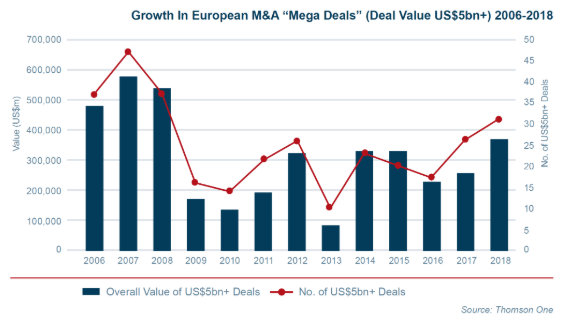 Pressure from activist investors in US companies and activist focus on non-US markets has also increased divestment activity across Europe. Activist funds have prompted boards to look more critically at their portfolio and product mix, as well as their geographical spread, either to avoid activist attention or as a result of activist activity.

It Pays to Be Divestment-Ready

Whatever the drivers, each carve-out deal presents unique challenges. Deeply integrated businesses can make visibility on historical and forecast standalone performance difficult to obtain and measure. Corporates should identify assets and entities within the deal perimeter (including where flexibility exists to respond to buyers’ requests), assemble a deal team covering all areas and jurisdictions, initiate early tax planning, consult legal advisers on regulatory filing requirements and HR issues, and consider corporate structuring. All of this should be done in a way that, to the extent possible, will not be damaging to the group if the divestment falls through. According to EY, a lack of understanding around interdependencies causes 56% of divestments to be delayed or derailed. Accordingly, it pays to be divestment-ready with an actionable separation plan.

Know What Drives Business Value – and Preserve It

Parties must consider what the value issues are and what pre-planning can be done to maintain deal value in the carved-out business. For example, group-wide customer or supplier contracts and parent company support (guarantees and security, people with dual roles etc.) that existed before the carve-out may not exist once the company stands alone. Buyers will need to account for potential savings in the current set-up when calculating value and planning integration, and the seller should consider the impact of being left with higher costs for the remaining business when shared services are no longer split. Corporates should evaluate how the deal will impact employees, including mitigating the risk of key employees being lost — incentivisation plans for critical personnel should be considered early in the process.

Know Your Prospective Buyer – and How They Will Operate the Business

Corporate divestments receive interest from a wide range of strategic and private equity bidders. In assessing a deal, corporates should look beyond the deal timetable and headline price, and consider their appetite for providing ongoing support for the carved-out business post-closing. Certain buyers, such as private equity firms, may not be able to provide necessary services to a divested business on day one, particularly in pharmaceutical or manufacturing deals. Sellers may need to agree to a transitional service agreement (TSA) to provide the carved-out business with ongoing support, as part of the whole package for value sought by the buyer.

While acquirers will typically pay for services provided under a TSA, such arrangements can impact the value of a deal for sellers and distract from the core business. Services such as IT are provided under a TSA on many deals, but as carve-out deals become more complex, other areas of support are likely to be required, such as procurement, regulatory responsibility, or legal support. For manufacturing businesses, significant value can be lost or gained in the pricing of manufacturing and supply agreements — particularly where such deals extend over a prolonged period. Having a clear path to separation, closing, and beyond before starting the sale process is necessary to avoid a protracted negotiation, expense, and stranded costs.

While large corporates often operate ongoing divestment programmes to streamline portfolios, realign focus, and extract value from underperforming assets, current market conditions are resulting in ramped up carve-out and divestment activity across the European market — there are plenty of issues for all sellers to plan for as they look to maximise value from their divestments.