The French Private Equity and Real Estate ("PERE") market is becoming increasingly more sophisticated. For years the PERE market centred on the US and the UK, while in France, indirect investment was seen as a mainly opportunistic strategy restricted to non-French investors. Now US investment funds have become regular investors in the French market, making both direct and indirect investments, and they are not alone – French investors too are increasingly relying on indirect and/or structured investments. As a result, structured investments are on the upsurge, beyond the hospitality sector that was traditionally the mainstay of these deals, in sectors such as retail and warehouse property, office buildings and shopping centres.

Broadly speaking, PERE refers to any pooled investment vehicle that allows investors to invest in real estate. In France these tend to be structured as joint ventures between a handful of large investors. The joint venture vehicles will generally seek to acquire the company owning the property in question; a structure that is both beneficial from a tax and regulatory perspective and commensurate with the size of the average deal in the French market.

When forming pooled investment vehicles, investors should consider the usual range of corporate governance issues, such as how the vehicle will manage liquidity issues or a deadlock situation. However, a number of pure real estate issues will need to be addressed in the transaction and investment/joint venture documents. These will include asset and property management arrangements as well as ensuring the liquidity of the real estate asset itself.

Particular attention should be paid to the leasehold arrangements with respect to the property, as these may affect the structuring of the deal. For instance, in the hospitality sector, operative companies do not always own the building where the business is operated. At an early stage in the transaction advisors should address whether the leases will need to be modified, terminated or renewed –especially when drawing up the business plan and/or in relation to any major decisions requiring the investors' consent. The advisors should also identify any other potential issues regarding the lease agreements (termination date, rent, etc.) and address them as soon as possible in the deal process.

Over the last 10 years, the French legal system has evolved to favour indirect and pooled real estate investments. Various forms of investments vehicles have been created, such as the organisme de placement collectif en immobilier ("OPCI") or the société de libre partenariat ("SLP"). Traditional open-ended retail funds, the société civile de placement immobilier ("SCPI"), have also been amended to favour PERE transactions. All these vehicles, whether purely dedicated to real estate investment (such as the OPCIs or the SCPIs) or not (such as the SLPs), have the status of an alternative investment fund ("AIF") within the meaning of the Alternative Investment Fund Managers Directive 2011/61/EU (the "AIFMD") and as such, they are regulated by the French financial markets regulator (the "AMF").

The choice of the vehicle is a key decision for an investor. A number of different issues should be taken into account when making this choice:

Choosing a tax efficient vehicle will be one of the primary concerns for any investor. The main constraint of PERE is that real estate investments are taxable in the country where the assets are located according to most tax treaties.

Investing using an OPCI, however, is tax transparent. Accordingly, no taxation applies at the OPCI level and instead investors will be taxed directly under their own applicable tax regime. This therefore avoids a double taxation between the vehicle and the investors.

A preferential tax regime may also apply to investors in a French Fonds Professionnels de Capital Investissement, subject to certain conditions. The "quota fiscal" for this structure is particularly tax efficient for an investor seeking to take advantage of dividends and capital gains.

The international tax treatment of each vehicle may also have an impact on the choice of the structure. The possibility of withholding tax being imposed on revenues paid into overseas accounts should be closely examined.

Not every vehicle is subject to the same legal constraints. Accordingly, depending on the strategy and purpose of the investment, some vehicles will be more suitable than others.

Some investors may specifically seek to invest in regulated vehicles, especially if they need to demonstrate compliance with French anti-money laundering and terrorist financing requirements (les obligations LAB-FT). An AMF regulated vehicle remains the best guarantee that such requirements are fully complied with. It provides any potential lenders additional comfort and considerably eases the "Know Your Customer" process.

An OPCI will be subject, pursuant to articles L. 214-36 and L. 214-37 of the French Code monétaire et financier, to (i) an exhaustive list of assets it can invest in, and so will be limited in some of its investment decisions; and (ii) specific minimum ratios for each asset class it can hold, for example a minimum of 60% in real estate assets and 5% in liquid assets. These limitations will apply to any investments made through the OPCI structure.

Meanwhile, French Fonds Professionnels Spécialisés can invest in a far wider variety of assets. However, in order to benefit from the quota fiscal mentioned above, investors must comply with strict and specific retention and investment allocation commitments.

Any regulated vehicle will be subject to monitoring, and potentially prior authorisation, by the AMF. This can have a significant impact on the timetable of a deal. For instance, an "other AIF" (Autre FIA) cannot market its own capital securities to non-professional investors without specific authorisation from the AMF. This takes around three weeks from notification, but can take even longer should the AMF request any additional information. In the context of a swift and competitive process, such a delay, if not factored into the deal timetable, could have serious consequences for a given bidder.

French legislation is otherwise quite liberal in its regulation of pooled investment vehicles. The French Monetary and Financial Code does not provide for any restrictions as to either the form of the investment vehicle or its jurisdiction of incorporation. Any investment into a regulated AIF would fall within the scope of this legislation to the extent that the purpose of such AIF is to acquire, manage and subsequently dispose of real estate assets. The main restrictions on the investing powers of an SCPI relate to short term buying and selling transactions (short term transactions are completely excluded from the permitted investments of an SCPI – though neither the French Monetary and Financial Code nor the French tax authorities have ever given a precise definition of a short term transaction).

Further liberalisation came from the transposition of the AIFMD into French law. As of 2013, SCPIs have been allowed to make certain indirect investments, whereas previously such vehicles were only entitled to make direct investments since their official creation in 1970. SCPIs are also able to invest into unlimited liability partnerships, other SCPIs, OPCIs and any other form of investment vehicle having a purpose equivalent to an SCPI or an OPCI (pursuant to Article L 214-115 of the French Monetary and Financial Code).

For example, in September 2017 Immorente, one of the largest French SCPIs (gross asset value as of 31 December 2017: €2.72bn), indirectly acquired 25 prime retail parks next to IKEA stores in eight European countries. Immorente is managed by Sofidy, a licensed French management company, but was able to acquire an interest in the parks by investing in a Luxembourg law acquisition vehicle. Immorente relied on the criteria of equivalence to perform its investment into the Luxembourg vehicle (Pradera European Retail Parks SCSp, a Luxembourg société en commandite spéciale).

Other evidence of increased PERE activity in France is a buoyant market of club deals set up by high net worth individuals. These investment vehicles have been active in the hospitality and office sector. For example, in July 2017 Mata Capital and Eternam purchased a portfolio of forty-five hotels from the Blackstone Group. This transaction was the largest portfolio acquisition closed in France during the course of 2017. Most of the equity was raised through a feeder vehicle, allowing various individuals to participate in the venture. Club deals by individuals have clearly become a credible and complementary source of equity for institutional investors, either for direct investments, through the club deal entity, or for more structured transactions in which retail money would be raised by a feeder entity (see box: Structure plan for a typical deal involving high new worth individuals for an example of a typical structure).

PERE has become a substantial source of investment and risks diversification for French retail funds. France has entered a record period for investments by French real estate investment vehicles and the use of pooled vehicles or club deals has become a lucrative potential source of returns for investors. French investors who are no longer fringe players in this market will increasingly look beyond France for joint venture partners or limited partnership arrangements, both for inbound and outbound PERE investments. 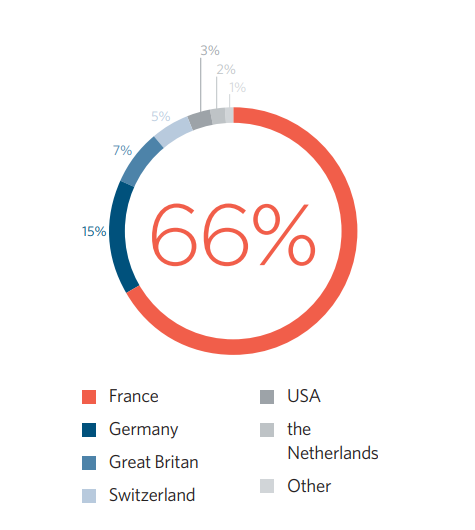 N.B.: no statistics are available as to the split between direct and indirect investments.