As I reported yesterday, a court within the Ninth Circuit’s footprint recently issued a ruling dismissing a TCPA claim without referencing Marks. This is not as surprising as it may sound because–as the updated TCPAWorld.com ATDS scorecard shows– the trend nationwide now is plainly to follow the statutory definition and not Marks. 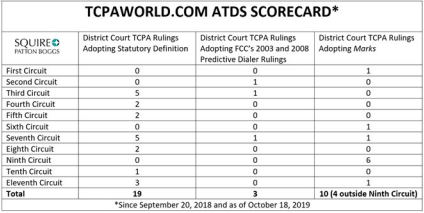 The “score” is now 19-4. That’s how many district court opinions have applied the statutory definition and Marks respectively since the date Marks was handed down. And notice that the last time a court outside of the Ninth Circuit applied Marks was back in mid-August, before we published our last scorecard.

Since then six new decisions have been handed down following the statutory approach (again, compared to zero following Marks outside of the Ninth Circuit) and one of those rulings included a rejection of a magistrate judge’s order following the 2003 and 2008 predictive dialer rulings.

Nonetheless, things are not as rosy as they may appear for Defendants. The blockbuster ruling in Morgan—concluding that Five9’s manual process may constitute the use of an ATDS–highlights the vagueness of the word “system” and sets a trap for any caller relying on a manual process that integrates with an ATDS. Moreover, a number of recent cases have placed renewed emphasis on the “capacity” of a system to serve as an ATDS– proving that all that is old is new again in TCPAWorld.

We’ll keep an eye on developments.