This follows on the heels of the July 2019 Summer Meeting, where the provincial and territorial Premiers agreed to revise the CFTA with the goals of:

On January 15, 2020, the Internal Trade Secretariat published a news release that federal, provincial and territorial governments have committed to reviewing their own Party-specific exceptions and have signed the First Protocol of Amendment on December 10, 2019 (the "Protocol"). The Protocol only permits parties to unilaterally remove trade exceptions. Amendments, including narrowing exceptions, will only take legal effect if there are no objections from all of the parties. Further, amendments cannot broaden any exceptions for existing or future measures. As readers of our procurement bulletins will note, there is a certain degree of irony surrounding the federal government's execution of a Protocol intended to prevent parties from narrowing the application of the trade agreements, in light of the amendments to the Canadian International Trade Tribunal Procurement Inquiry Regulations, quietly passed without public consultation in 2019. The amendments, if taken at face value, enable the federal government to invoke a national security exception for any procurement without having to validate the reasons for doing so, and remove itself from oversight by very same Trade Tribunal it established four decades ago to monitor its trade agreement compliance (thus doing indirectly what it seems to agree it cannot do directly). Please see our previous bulletin titled Because We Said So: Removing the CITT from the Review of Canada’s ‘National Security Exception’.

Existing and Future Exceptions, Not Related to Procurement

Alberta and Manitoba have also removed exceptions for existing measures or exceptions for future measures. Although not applicable to procurement, they are trade-related measures.

Exceptions for existing measures are general measures applicable to goods or services (excluding those for the purpose of government procurement), which a party maintains despite the CFTA requirements that would otherwise prohibit:

Exceptions for future measures are similar to the general measures, but are prospective - a party may reserve the right to adopt or maintain any measures in an identified sector within an exception.

On October 4, 2019, Manitoba announced it would remove an additional five exceptions for existing measures and future measures:

Manitoba also narrowed its exception in the energy sector by removing preference for transferring or granting surplus Manitoba Hydro property to Manitoba residents.

In addition to the exceptions previously removed, Alberta announced that it would remove eight existing and future measures exceptions and narrow two exceptions pertaining to alcohol and forestry, but retain authority over four market access exceptions.

Alberta will maintain authority over these four market access exceptions:

The Future: More Trade Barriers to be Eliminated?

Manitoba plans to continue its review of eliminating additional exceptions for existing and future measures.

Alberta announced that it will review whether to unilaterally recognize professional and licensed credentials from across Canada to promote an even more open labour market.

It will be interesting to see when and to what extent the remaining provincial and territorial governments eliminate their CFTA exceptions in all categories.

The new trade agreement thresholds for 2020 are as follows: 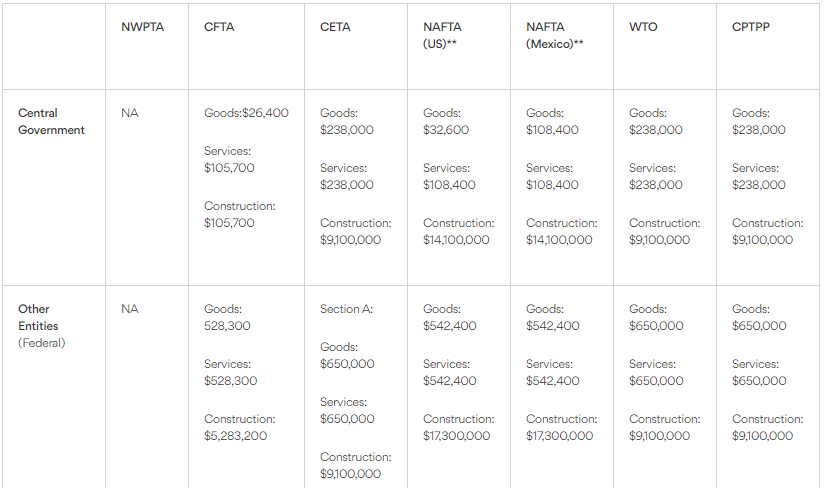 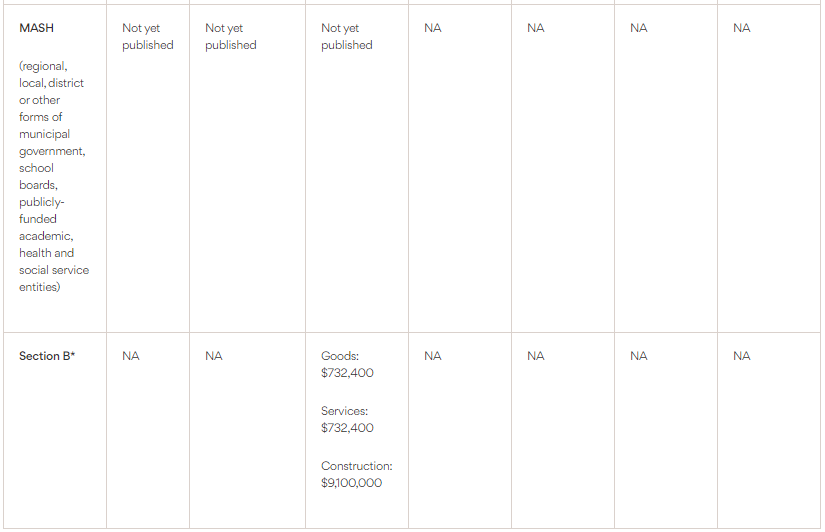 ** Once ratified by all three member countries, the CUSMA will supersede the NAFTA. As the CUSMA chapter on government procurement applies only as between the United States and Mexico, the WTO thresholds will apply as between Canada and the United States and Canada and Mexico. Mexico ratified the CUSMA on December 12, 2019, and the US ratified the deal on January 29. Canada is expected to proceed with the ratification process following the resumption of Parliament on January 27, 2020.

To view all formatting for this article (eg, tables, footnotes), please access the original here.
Fasken - Marcia Mills and Karen Cheung
Back Forward