The Parliament has passed the Specific Relief (Amendment) Bill, 2018 (“Bill“), which brings about significant amendments to the Specific Relief Act, 1963 (“Act“). On July 23, 2018, the Rajya Sabha passed the Bill, which had been passed by the Lok Sabha on March 15, 2018. The Bill is currently awaiting President’s assent, following which it will be part of the law. In this article, we are providing a brief overview of the significant changes brought about by the Bill.

Section 14 (1) of the Act lists the contracts which cannot be ‘specifically enforced’. The Bill replaces Section 14 and has limited the grounds under which specific performance can be refused. A comparative table showing the old provisions vis-à-vis the new provisions is given below: 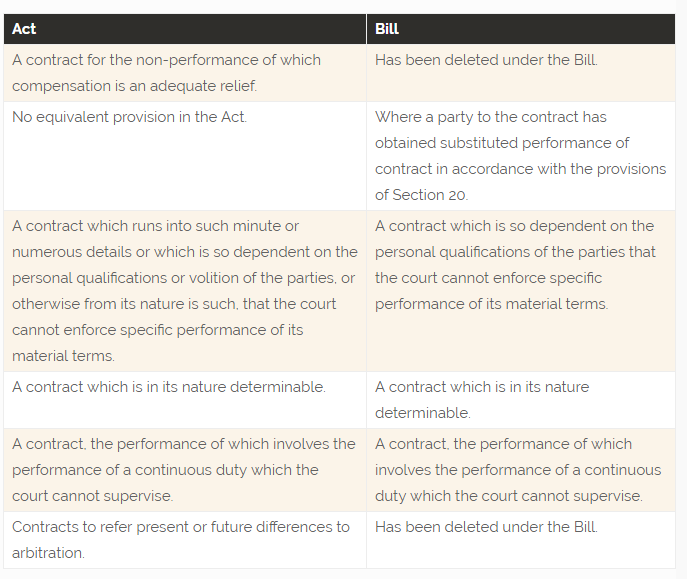 A new section has been introduced to the Act (Section 14A), which empowers Courts to get expert opinion from one or more than one experts, where the Court considers it necessary, to assist it on any specific issue involved in the suit. Such opinion or report given by the expert will be a part of the record of the suit. The Court may also direct the fee, cost or expenses to be paid to the expert and the proportion in which the parties shall pay such amount.

No Need to Aver Readiness and Willingness

It is no longer necessary for parties to aver their readiness and willingness to perform the contract in order to seek specific performance. It is sufficient to merely prove that they have been ready and willing to perform.

In order to expedite the disposal of suits filed under the Act, the Bill has, through the introduction of Section 12C, prescribed a period of 12 months from the date of service of summons to the Defendant, for its disposal. This period of 12 months can be extended for a further period not exceeding 6 months in aggregate after recording reasons in writing for such extension.