The England and Wales High Court has recently handed down a judgment confirming that Big Horn’s signs infringe Red Bull’s European Union trade marks (EUTMs). Deputy Judge Kelyn Bacon QC found that the signs took unfair advantage of the distinctive character and repute of the energy drink giant’s marks, but were not likely to give rise to confusion on the part of the public.

In August 2016 Bulgarian company Voltino filed an EUTM application for the Big Horn mark bearing the following double ram and sun device, with the words “Big Horn”, for goods including energy drinks:

Red Bull’s opposition to that application was initially rejected by the EUIPO Opposition Division. However, this decision was overturned on appeal in January 2019, with the Board of Appeal rejecting Voltino’s application in its entirety.

This trial concerned potential infringement by Big Horn and Mr Lyubomir Enchev, the company’s controlling mind and sole director. Mr Enchev started negotiations with Voltino in 2017.The discussions led to the incorporation of Big Horn in the UK to carry on the business of importation and sale of energy drinks and bottled water bearing figurative marks similar to those applied for by Voltino.

Big Horn energy drinks first appeared in Bulgaria (May 2017) and the UK (June 2017) in cans that were identical in size and shape to the classic Red Bull cans. Red Bull subsequently commenced court proceedings against Mr Enchev, Big Horn and Voltino (obtaining judgment against the latter in late 2019) under Articles 9(2)(b) and 9(2)(c) EUTMR, claiming that the disputed Big Horn signs were likely to give rise to confusion on the part of the public and took unfair advantage of the distinctive character or repute of the Red Bull trade marks. Red Bull’s marks and the disputed Big Horn signs are as follows: 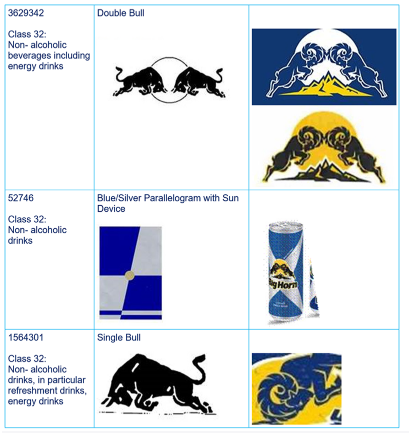 The court considered the following issues:

Red Bull successfully argued that use of the Big Horn signs infringed its rights under Article 9(2)(c). In directly bringing to mind the visual and conceptual forms of the Red Bull trade marks, Deputy Judge Bacon found it very likely that the disputed signs led to artificially enhanced product sales; Big Horn was effectively able to free-ride on Red Bull’s very considerable reputation and to benefit from the drink maker’s extensive marketing efforts.

Drawing a comparison between the marks, the deputy judge considered there to be visual and conceptual similarity between the Big Horn double ram sign and the Red Bull double bull mark for the purposes of Article 9(2)(c). Notably, the EUIPO Board of Appeal had previously found that the double ram sign, when looked at in conjunction with the words “Big Horn”, bore only a low degree of similarity to the double bull mark, and that the differences between the marks were “not likely to be overlooked by the average consumer”.

The deputy judge also considered there to be visual and conceptual similarity between Big Horn’s blue/silver geometric device and Red Bull’s blue/silver parallelogram device, as well as between the Big Horn single ram sign and the Red Bull single bull mark.

The deputy judge then went on to make a global assessment with regard to the circumstances of the case. The Big Horn signs were being used for the same products – energy drinks and water – as the Red Bull marks and were being applied to cans of an identical size and shape to the classic Red Bull cans. Red Bull and Big Horn’s products were also being sold in the same retail outlets, and the defendants’ Facebook page included numerous pictures of their cans placed directly next to Red Bull drinks. For these reasons, and noting that the highly distinctive character and reputation of Red Bull’s marks were beyond dispute, Deputy Judge Bacon considered that Big Horn’s signs would be likely to cause the average consumer to link those signs with Red Bull’s trade marks, and that use of the Big Horn takes unfair advantage of the distinctive character and reputation of Red Bull’s trade marks.

Deputy Judge Bacon did not sympathise with Mr Enchev’s argument that it was lawful for him to use the Big Horn logo during the time between the EUIPO’s original decision and its subsequent appeal. The deputy judge clarified that the unsuccessful opposition by Red Bull did not confer any rights to the defendants and did not grant a registered trade mark to Voltino. Furthermore, he found that there was no evidence of reliance on the decision of the Opposition Division. Big Horn did not cease to advertise or sell its products before or after either of the EUIPO decisions.

Whilst it was no longer strictly necessary to elaborate on the implications of Article 9(2)(b), Deputy Judge Bacon noted that he “would not have been persuaded” that the Big Horn signs were likely to confuse the average consumer. He found that, even with a low degree of attention, the average consumer would be well aware of the differences between the signs and would likely not perceive Big Horn products as Red Bull products either at the point of initial interest or when purchasing the product, and the average consumer would also be unlikely to experience post-sale confusion. The deputy judge did not believe that the level of similarity was such as to lead the public to believe there to be any economic link between the products. Instead, it was held that the Big Horn products would likely be perceived as cheaper or alternative versions of Red Bull’s products.

Mr Enchev’s actions were held to meet the Fish & Fish test; he was the sole director and only controlling mind of Big Horn. He specifically set the company up as a vehicle to import and market energy drinks; he was directly responsible for its business and advertising activities. He also controlled Big Horn’s website and social media accounts.

The court granted an EU-wide injunction against the defendants and ordered a substantial award of costs to be paid, including a sum to reflect the lack of cooperation throughout the action by Big Horn and Mr Enchev. The defendants did not serve any witness evidence for the trial or provide any disclosure (including information relating to the terms of the contract between Big Horn and Voltino). Neither Mr Enchev nor Big Horn appeared at the pre-trial review or filed a skeleton argument for the trial.