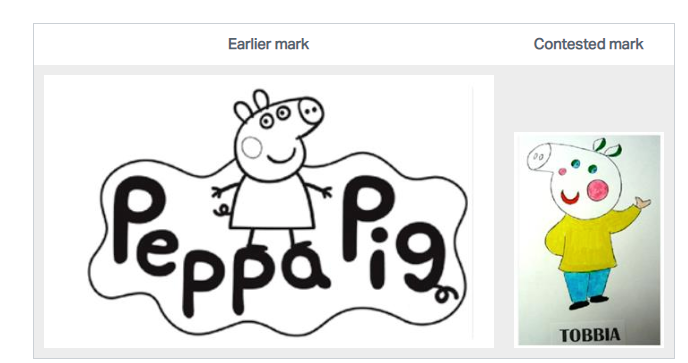 Regardless of whether you've watched Peppa Pig or not, it is likely you will be familiar with the eponymous character of this children's cartoon. It would seem that Italian Customs authorities count among those who recognise the animated pig, after they intercepted a consignment of clothing bearing a similar pig character named TOBBIA, which bore a striking resemblance to Peppa Pig.

This sign (above right) was applied for and registered as an EU trade mark by Mr Xianhao Pan in 2013. The mark covered "clothing, footwear and headgear". Entertainment One UK Ltd and Astley Baker Davies Ltd , the owner of rights in Peppa Pig, filed an application for a declaration of invalidity in April 2015.

In support of the application, an EU figurative mark (which includes a drawing of the character and the name Peppa Pig, shown above left) was relied upon in relation to the same goods in class 25. The application was initially rejected by the Cancellation Division and then appealed. The First Board of Appeal of the EUIPO upheld the appeal and the declaration of invalidity in favour of the earlier Peppa Pig mark.

Mr Pan, the Applicant, appealed the Board of Appeal's decision to the General Court on four grounds. The first three were based on procedural issues and were all rejected by the Court:

After the Court had assessed and rejected these grounds, it turned to the substantive issue of the case – whether there is a likelihood of confusion between the marks. The Applicant argued that the signs had not been viewed as a whole and the Board of Appeal had only taken some aspects into consideration. In particular:

The Court found that the marks were similar. Both signs represented an illustration of an anthropomorphic animal, specifically a pig, and the animals shared similar features (the same shape of head, the circular shaped cheeks, the upturned mouth and the features all being on the same side of the face).

The differences were noted: the clothes worn by the animals, the colours and word elements, the different arm positions and the absence (or presence) of a tail. Although there were differences, these were not capable of outweighing the similarities between the marks.

The Court held that phonetically both marks were similar, due to the repetition of a strong consonant, a 'p' in the earlier mark and 'b' in the contested mark. Conceptually, both signs are associated with a pig and therefore similar.

Although the Applicant argued that the animal depicted is a tapir, the Court commented that the tapir is not an animal well known to the public. Within the overall assessment of the marks, the visual similarities were more important as the products are clothing, footwear and headgear. Purchasing these items involves primarily the visual examination of the marks.

The Court therefore upheld the appeal and invalidated the TOBBIA trade mark.

It is often the case that companies have different clothing lines which work on variations of the same mark or character, with small changes to the primary image or mark used; Tobbia the tapir may well be perceived by some to be linked to Peppa the pig.This case serves as a reminder that when assessing the likelihood of confusion it is important to consider the goods and/ or services that marks are registered for. For clothing, the visual comparison will weigh heavier than the phonetic and conceptual comparisons, (although in this case there were similarities across the board).

As to the other arguments raised by the Applicant, the Court was unconvinced. The procedural grounds were rejected and arguments that the animal represented a tapir failed.