Data released by the Greater Kansas City Jury Verdict Service about jury trials in 2019 shows that results are broadly trending in favor of defendants. Defendants prevailed on almost 60% of the claims decided by KC-area juries last year, representing an improvement over their win rate in 2018. Calendar year 2019 also saw a drop of nearly 30% in the number of verdicts over $1,000,000, despite a modest increase in the total number of claims decided by juries.

86 different juries in the Kansas City area decided a total of 181 claims in 2019 (with some cases involving multiple claims). 75 of those 181 verdicts (41%) resulted in some amount of recovery to the plaintiff(s), while 106 (59%) ended in defense verdicts.

Compared to 2018, this represents an increase of about 8% in the total number of verdicts handed down. Despite taking more claims to juries, defendants’ win rate improved by about 7% from the prior year, when roughly 52% of jury verdicts were for the defendant(s). This continues a trend from 2017, when defendants won roughly 51% of jury verdicts. From 2014-2016, plaintiffs’ win rate had been on the rise. 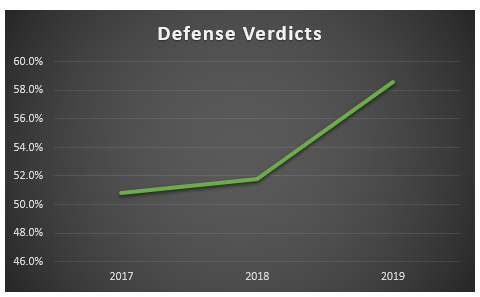 The data contained other encouraging news for KC-area defendants and defense attorneys. When juries did award damages last year, the figures were generally smaller than they have been in recent years. 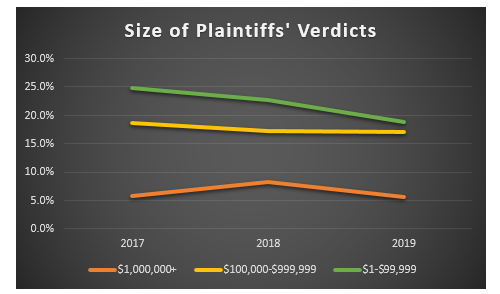 Although the Average Amount Awarded Increased, Initial Impressions are Misleading

This tracks with the general feeling among local practitioners that Jackson County is by far the most plaintiff-friendly venue in the area, and that state courts tend to hand out bigger verdicts than federal courts.