California is making significant progress on a first-of-its-kind regulation that will reduce GHG emissions from ride-sharing vehicles.

As directed by Senate Bill (SB) 1014, the California Air Resources Board (CARB) is developing the Clean Miles Standard, a first-of-its kind regulation designed to reduce greenhouse gas (GHG) emissions from ride-sharing vehicles and increase the use of zero-emission vehicles (ZEV). The regulation will include two primary requirements related to: (1) increasing the percentage of total miles driven by ride-sharing companies using ZEVs; and (2) reducing GHG emissions per passenger mile traveled. CARB staff rolled out this regulatory concept in a series of public workshops earlier this year, and recently presented updated targets at a workshop on November 19, 2020, along with draft regulatory language released on November 20, 2020. The COVID-19 pandemic has impacted development of the targets, since prior assumptions about ride-sharing are now in flux and the regulatory timeline has been delayed. Here are the top four things to know about this first-in-the-nation regulation.

SB 1014 was passed in 2018 and directs CARB to promulgate certain regulations applicable to the ride- sharing industry that will support California’s broader climate and zero emission transportation policies. These policies include SB 32, which requires California to reduce GHG emissions to 40% below 1990 levels by 2030; Governor Brown’s Executive Order targeting 1.5 million ZEVs on the road by 2025,1 and subsequent Executive Order increasing the target to 5 million ZEVs on the road by 2030;2 and an Executive Order setting a goal of achieving carbon neutrality in California no later than 2045.3 More recently, Governor Newsom’s Executive Order directing CARB to develop regulations to mandate that 100% of in-state sales of new passenger cars and trucks are zero-emission by 2035 shows that electrification of the California passenger vehicle fleet is top of mind in Sacramento.4

Vehicles employed by ride-hailing services such as Uber and Lyft, also known as Transportation Network Companies or TNCs, drive 1.2% of the statewide light-duty VMT, with greater proportions in urban areas.9 A study by one transportation consulting firm looked at six major US cities — Seattle, San Francisco, Los Angeles, Chicago, Boston, and Washington, D.C. — to assess the share of total VMT attributable to TNCs.10 The study found that in the core county of each urban area the TNC share of total VMT ranged from 1.9% (Seattle) to 12.8% (San Francisco). With the need to reduce transportation emissions and the expected growth of TNCs, California is looking to avert this potential rise in GHG emissions.

2.CARB will adopt “targets and goals” to reduce emissions from TNCs

SB 1014 established the Clean Miles Standard and Incentive Program, which requires CARB to adopt, and the California Public Utilities Commission (CPUC) to then implement, a program to reduce GHG emissions from TNCs11 by encouraging broader adoption of ZEVs and incorporating VMT reduction strategies.

SB 1014 has four main requirements, as seen on the following statutory timeline:12

The statute uses a new metric of grams of carbon dioxide (g CO2) per passenger mile traveled (PMT) (the GHG Emissions Metric) to measure emissions from TNCs. CARB was directed to establish a baseline GHG Emissions Metric, which will be used to project a “business as usual” (BAU) emission inventory from which TNC emission reductions will be required in the future. The emissions are to account for all VMT associated with a TNC vehicle, including the period when a driver is waiting for a rider (P1), the period when a driver is en route to pick up a rider (P2), and the period when the rider is in the vehicle (P3). P1 and P2 together are miles driven without a passenger, and are referred to as “deadhead miles.”

The denominator, or PMT, is the total number of miles driven in P3 multiplied by the number of passengers in the car (not including the driver). The metric also includes miles associated with the “facilitation of walking, biking, and other modes of active or zero-emission transportation” (“optional CO2 credits”). These additional qualifying miles are not defined in the bill, and for purposes of the baseline emissions CARB has assumed them to be zero. The equation used to determine the GHG Emissions Metric is as follows:

After establishing a baseline for emissions, the statute directs CARB to adopt, and the CPUC to implement, “annual targets and goals” for TNCs to reduce their GHG Emissions Metric below the BAU inventory. These “targets and goals” will come into effect in 2023, and CARB must set them to be both “technically and economically feasible” and consistent with the goal of having 5 million ZEVs on California roads by 2030. The CPUC, which is tasked with implementing the rule when it takes effect in 2023, will begin a formal rulemaking process (via an Order Instituting Rulemaking) following adoption of the Clean Miles Standard. According to CARB and CPUC staff, the two agencies will work together to develop the enforcement mechanisms for the regulation as part of CARB’s rulemaking, with the CPUC having implementation and thus enforcement authority when the rule takes effect.

CARB completed its 2018 Base-Year Emissions Inventory Report in December 2019, and presented the results at a workshop on April 1, 2020.14 Data used to establish the baseline came from 14 TNCs for the year 2018, and consisted of 1.4 billion trip records for 600,000 TNC vehicles.

CARB’s data analysis revealed certain differences between the statewide vehicle fleet and the fleet of TNC vehicles. The TNC fleet is on average slightly newer, with a vehicle mix weighted more toward passenger vehicles and less toward trucks, and with a larger fraction of high-mileage hybrid vehicles.15 The TNC fleet averages a 7% lower passenger occupancy rate (1.55 passengers per vehicle, compared with 1.68 passengers for the statewide average), and of total TNC VMT, 61% is with passengers in the vehicle and 39% of total VMT are deadhead miles.16

CARB calculated a 2018 baseline GHG Emissions Metric equal to 301 grams of CO2 per PMT for TNCs, about 50% higher than the statewide fleet average of 203 grams of CO2 per PMT.17 Projecting these baseline emissions out to 2035 for a BAU emission inventory, as shown in the graphic below, assumed constant factors like TNC growth rate, passenger occupancy rates, percent of deadhead miles, and fleet mix (vehicle age and class).The BAU emission inventory assumes that the fraction of TNC VMT that is driven by electric vehicles (eVMT) will grow at the rate expected under CARB’s Advanced Clean Car regulation, projecting an increase in eVMT from 0.8% in 2018 to 5.2% of VMT in 2035. 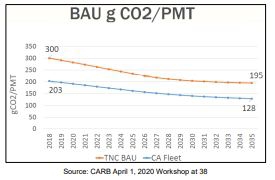 The % eVMT Target will set a requirement for the percent of annual TNC VMT that must be driven by battery electric vehicles (BEV) and fuel cell electric vehicles (FCEV). Notably, the target will not include any miles driven by plug-in hybrid electric vehicles (PHEV) because of the difficulty in quantifying how many miles driven by PHEVs are truly electric versus utilizing the combustion engine. In determining the feasibility of a % eVMT Target, CARB first looked at whether the necessary ZEV technology and availability would be in place in 2023, when rule implementation begins. Based on the 2018 data collected from TNCs, CARB found that 95% of TNC drivers travel less than 250 miles per day. There are currently multiple models of ZEVs that have a range of 250 miles or more, and by 2023 CARB expects there to be both a new and used market for these vehicles. Thus, CARB concludes, there is not likely to be a technology barrier to the use of ZEVs by TNC drivers.

To set the % eVMT Target, CARB developed a cost model to estimate the rate at which TNC drivers are likely to switch from combustion engine vehicles to BEVs.18 The model accounts for costs related to vehicles, fuel, and charging to determine how many drivers for a TNC will switch to BEVs. At the July 17, 2020, workshop, staff presented a % eVMT Target of 60% by 2030.19 Notably, at the November 19, 2020, workshop CARB presented an updated — and more aggressive — target of 90% eVMT by 2030. Further analysis of this updated standard will be provided in a subsequent Client Alert.

The second prong of the regulatory regime is the GHG Emission Target, measured in grams of CO2 per PMT, and determined by the equation above. Factors affecting the GHG Emission Target are VMT (both with and without passengers), CO2 emissions based on the type of vehicle driven, occupancy of the vehicle, and “optional CO2 credits.” Requirements for earning, and using, optional CO2 credits are still in the early stages of development. Preliminary concepts were presented at the November 19, 2020 workshop and include credit for TNC investments in bikeway/sidewalk projects, credit for passengers connecting TNC trips to public transit, and credit for direct TNC investments to reduce the cost to drivers of switching to a BEV.

The GHG Emission Target will be set using the % eVMT Target and estimates of vehicle occupancy over time. CARB staff has stated that 98% to 99% of the reductions in the GHG Emission Target can be attributed to vehicle electrification consistent with the % eVMT Target, and the metric relies far less heavily on increasing occupancy of TNC rides — which is, of course, highly uncertain given the ongoing COVID-19 pandemic and the fact that TNCs have put shared rides on hold.

Updates to both the % eVMT Target and the GHG Emission Target, along with information on regulatory “flexibilities,” were presented at the November 19, 2020, workshop. Additionally, the Draft Regulation Order for the Clean Miles Standard was released on November 20, 2020. Latham & Watkins is reviewing this most recent information and will report back on this regulation.