To facilitate claim amendments in inter partes, post-grant and covered business method patent reviews (collectively AIA trials), the USPTO on October 29, 2018, published a request for comment (“RFC”) on a proposed procedure for filing motions to amend in AIA trials. For our previous discussion of the RFC, see here.

The appendices of the notice provides the two below schedules for filing papers relating to the MTA and petition, depending on whether a revised MTA is filed. 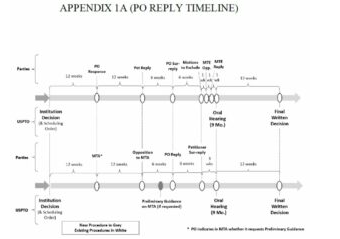 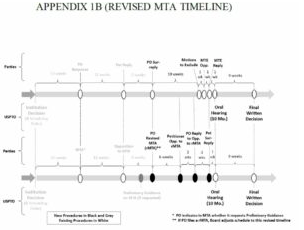 In response to comments to the RFC, the USPTO made some notable changes to its proposed MTA procedure.

Patent Owners Can Opt-Out: The RFC had indicated that after implementation of the pilot program, the proposed procedure “would be the only option available for amending claims in AIA proceedings.” Also, under the proposed program, the Board would automatically issue preliminary guidance or a preliminary decision for a MTA. Commenters favored some form of opting-out of the pilot program (Comment 10) and indicated concern that automatic issuance of a preliminary decision could dissuade settlement in some circumstances (Comment 6).

In response to these comments, under the current pilot program, preliminary guidance/decision will only be issued upon the patent owner’s request. Patent owners can opt-out of the pilot program by not requesting preliminary guidance or filing a revised MTA. Instead, patent owners can pursue an MTA in effectively the same way as under current practice, with some slight extensions to the time between due dates for later-filed papers.

Times between due dates: Commenters were concerned that (1) the proposed time between due dates for filing papers were too short (Comment 1) and (2) the discrepancy in time between MTA filings and filings relating to the petition could adversely affect the parties’ cases and create inefficiencies (Comment 3).

In response, the pilot program has expanded the time between dues dates for certain MTA related filings. For example,

In addition, the pilot program has modified the timeline proposed in the RFC to align the MTA due dates and petition related due dates. Specifically,

The pilot program provides optional MTA practices that are applicable to AIA trials instituted on or after March 15, 2019. The patent owner has 2 new options allowing it to choose to: (1) receive preliminary guidance from the Board on its MTA and (2) file a revised MTA after receiving the petitioner’s opposition to the original MTA and/or receiving the Board’s preliminary guidance (if requested). Parties should carefully review the notice for the pilot program, including the timelines regarding the filing of various papers relating to the MTA/revised MTA and the petition.