Does Samsung have waterproof evidence that its Galaxy phones don’t leak?

*Based on test conditions for submersion in up to 1.5 meters of freshwater for up to 30 minutes. Not advised for beach or pool use. Water or dust damage not covered by warranty.

This image was part of the marketing: 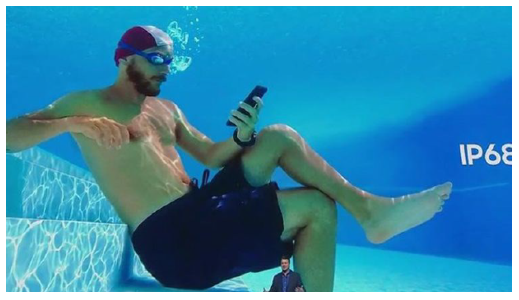 The interest of the consumer regulator, the Australian Competition and Consumer Commission (the ACCC) was drawn to this marketing when it received complaints from consumers whose warranty claims were denied by Samsung Australia after their phones were damaged when used in water.

The ACCC has instituted proceedings in the Federal Court against Samsung Electronics Australia Pty Ltd (Samsung) alleging it made false, misleading and deceptive representations in advertising the water resistance of various ‘Galaxy’ branded mobile phones.

Since around February 2016, Samsung has widely advertised on social media, online, TV, billboards, brochures and other media that the Galaxy phones are water resistant and depicted them being used in, or exposed to, oceans and swimming pools. The ACCC’s case involves over 300 advertisements.

“Samsung itself has acknowledged that water resistance is an important factor influencing Australian consumer decisions when they choose what mobile phone to purchase,” ACCC Chair Rod Sims said.

Samsung’s Galaxy phones which were advertised as being water resistant were sold at a higher price than Samsung phones which do not have this feature.

“Under the Australian Consumer Law, businesses cannot mislead consumers about their products’ capabilities. Any attempt to do so will risk court action from the ACCC.”

Linked to the media release is the Concise Statement of Facts filed in the Federal Court of Australia. This is a summary.

The two representations in the marketing materials which the ACCC alleges contravene the Australian Consumer Law (ACL) are:

The ACCC alleges that Samsung had no reasonable grounds for three reasons:

The ACCC alleges that the conduct and representations are false or misleading in contravention of ss 18(1) ACL (misleading and deceptive conduct), s 29(1)(a) and (g) ACL (performance characteristics, uses and benefits) and s 33 ACL (characteristics and suitability).

The ACCC alleges that the harm suffered by consumers who were looking to purchase a mobile phone was that they were misled or liable to be misled about:

And that consumers who purchased the Galaxy phones suffered harm when their phones were exposed to water, which was exacerbated by Samsung’s denial of liability under warranty.

And that Samsung’s conduct gave it:

The ACCC is seeking penalties, consumer redress orders, injunctions, declarations, publication orders, an order as to findings of fact, and costs.

Today’s smartphone is no longer a device of convenience, but rather ‘a part of the user’ which makes marketing messages about performance in a wide variety of circumstances all the more emotive, powerful and appealing.

From a consumer marketing perspective, there is no more powerful message than ‘you can take me anywhere and I’ll perform’, especially to a younger generation where ego and identity are the prime movers of purchasing decisions.

The objective of the Samsung marketing campaign was likely to be more than ‘upselling’ existing Samsung customers to a more expensive smartphone on the promise of better performance. It was likely also directly targeting disaffected consumers of other smartphone handset brands, who may be feeling jaded by the repeated handset failures and issues with iPhone handsets, including warranty and repair issues where water, moisture or dust was detected in the phone.

Samsung’s marketing was clever as it tapped into a deep emotional connection that people have with their smartphone, and an even deeper fear of it breaking or failing in the course of using it in their lives. Especially the ‘adventurous’ part of their lives where the risks of phone damage are higher.