Oscar Wylee, an optometry and eyewear retailer, decided to target socially-conscious consumers by promising to support charitable causes. Specifically, each time a consumer purchased a pair of spectacles they would donate a pair to someone in need.

That’s a winning marketing strategy if followed correctly, as Michael Field outlines in his marketing analysis at the end of this article.

But actions speak louder than words, and this is where Oscar Wylee failed.

1. Pair for a Pair statements including:

“For every pair purchased, a pair is donated to someone in need”

“One for one. All the time. Forever. We donate a pair of glasses to those in need for every pair purchased” 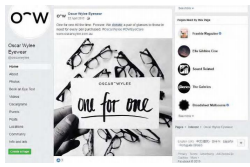 “Oscar Wylee helps out through a range of different ways. From the performance of eye tests, distribution of glasses, performance of cataract surgeries, and training of eye doctors.”

These statements appeared in the ‘I Care Video’ posted on the Oscar Wylee website, Youtube and Vinmeo, on Facebook and signs displayed in Oscar Wylee stores.

Oscar Wylee admitted that the two statements contravened the ACL.

The Pair for a Pair Statements were:

The Rose Charities Statements were:

Because although Oscar Wylee represented it was closely affiliated with Rose Charities (a charitable association) between 1 January 2014 and 31 December 2018, it made only one donation of $2,000 on 4 February 2014.

The Court considered these factors in assessing the penalty:

“the Pair for a Pair statements were capable of leading ordinary or reasonable consumers of spectacles to the belief that on each occasion a pair of glasses was sold, a pair would be donated to charity — when the facts were very different. The effect of the Rose Charities Representations was to describe or imply that Rose Charities was a partner of Oscar Wylee, which implied a continuing, cooperative charitable relationship between the two entities when there was no such relationship. Indeed, there was no relationship at all.”

The Court agreed to Oscar Wylee’s request to pay the penalty by four annual instalments, with the first instalment of $875,000 payable on 18 October 2020. The reason given was “Oscar Wylee’s current financial state and the anticipated impact of COVID-19 on its operations in the short to medium term”. The Court noted that each instalment will exceed the annual profit ‘by a wide margin’ and will not be treated by Oscar Wylee or anyone else ‘as an acceptable cost of doing business’.

The Court ordered publication of a statement headed: “Federal Court finds that Oscar Wylee has breached the Australian Consumer Law”.

The Court also ordered that Oscar Wylee be restrained from making statements that it is making charitable or philanthropic donations or has charitable affiliations for 6 years.

And the court ordered Oscar Wiley contribute $30,000 towards the ACCC’s legal costs.

The famous advertising heavyweight David Ogilvy once said, "The consumer isn't a moron, she's your wife.”

What he meant is that if you are lying to your customer, they will eventually find out and there will be a price to pay for that deception. So, in essence, don’t lie, treat the customer with respect, with regard for their intelligence and present your offer sincerely and genuinely, without deception.

Oscar Wylee did not listen to David Ogilvy’s advice. They took the extraordinary decision to massively deceive their customers with numerous false promises of social good and a very well-constructed, and heavily marketed pretence of being a good corporate citizen.

Oscar Wylee is playing in the fiercely competitive $4 billion Australian Optometry and Optical Dispensing market which has seen a massive increase in new competitors with physical stores, compounded by a huge growth in online only competitors and a global marketplace.

Given the competitive landscape, brand integrity is more important than ever. Particularly with socially conscious consumers who are voting with their wallets for social causes that matter to them.

By promising ‘pair for a pair’ and not keeping that promise, Oscar Wylee has broken the most important bond that you can have with a consumer. That bond is trust.

The fines are probably sufficient as a penalty for its actions and as a deterrent to others in the market to prevent further deceptions of this nature.

However the biggest penalty that Oscar Wylee will pay is the loss of reputation and brand trust. It has left the market wide open for a genuine competitor with a legitimate social cause agenda and with actions to match to occupy the space left behind by Oscar Wylee.