The Treasury Laws Amendment (Measures For A Later Sitting) Bill 2021: Unfair Contract Terms Reforms (Exposure Draft Bill) seeks to amend the Australian Consumer Law (ACL) and the Australian Securities and Investments Commission Act 2001 (Cth) (ASIC Act) to clarify the UCT regime, expand its scope and strengthen its enforcement. Significantly, it introduces a financial penalty payable for prohibited use, application or reliance of a UCT, and increases the number of small business contracts to which these laws will apply.

We discuss the backdrop to the proposed reforms, the proposed changes and the practical implications of these changes below.

Generally speaking, the existing UCT regime applies to “standard form contracts” issued to consumers and small businesses in relation to goods, services and in relation to financial products or services (under the ASIC Act).

Leases, licenses and serviced office contracts may also fall within the scope of the UCT’s regime –notwithstanding they may also be governed by focused state legislation (such as the Retail Shop Leases Act 1994 Qld). This was demonstrated in Australian Competition and Consumer Commission (ACCC) v Servcorp Ltd [2018] FCA 1044 where the ACCC successfully sought declarations that terms within standard contracts for serviced offices were unfair.

UCT reforms in early 2021 saw the regime extend its protections to insurance contracts, subject to the Insurance Contracts Act 1984 (Cth).

A term is considered unfair if it:

All three limbs of the unfairness test must be proven for a term to be deemed unfair. If a court or tribunal finds a term unfair, the term will be void (i.e. not enforceable or binding on the parties). However, a court or tribunal cannot currently impose a penalty for the use of the term.

The types of clauses that the UCT regime can capture include:

A recent example can be seen in Australian Securities and Investments Commission v Bank of Queensland Limited [2021] FCA 957, where the Federal Court found several terms in various Bank of Queensland (BoQ) small business loan contracts to be unfair. Among other terms, these included unilateral variation clauses where a borrower was given no notice or opportunity to exit the contract without penalty, and indemnification clauses where a customer had to indemnify BoQ for losses caused even by BoQ’s own mistake, error or negligence.

Since the introduction of the UCT regime in 2010, it has been subject to numerous reviews. The long-awaited Exposure Draft Bill aims to implement reforms agreed to late last year at a meeting of the Legislative and Governance Forum of Consumer Affairs, which followed from a review in 2018 and a period of public consultation throughout 2019 and 2020.

What are the key reforms?

In summary, the proposed changes are:

See our table below for a more detailed look at each proposed change. 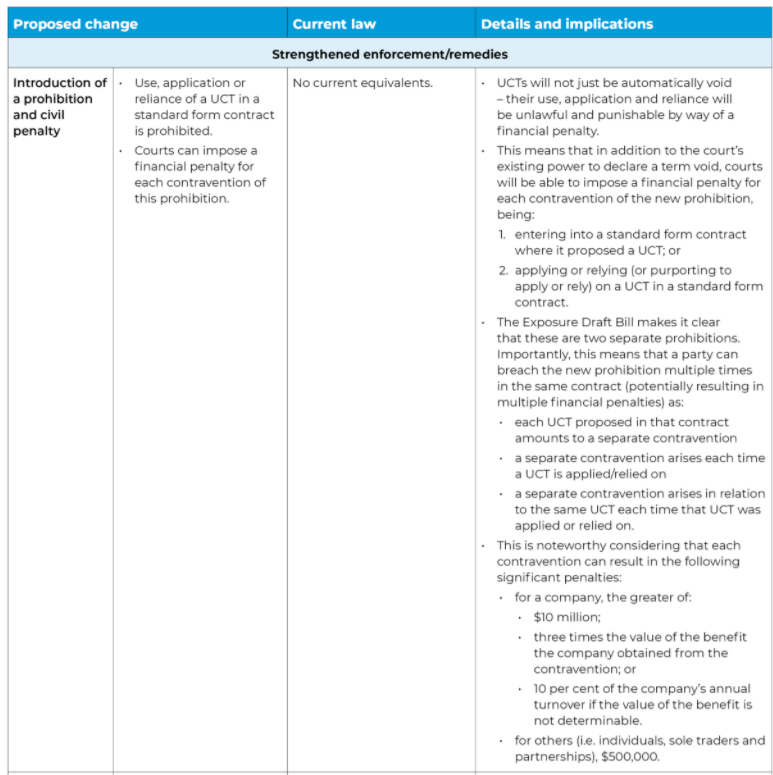 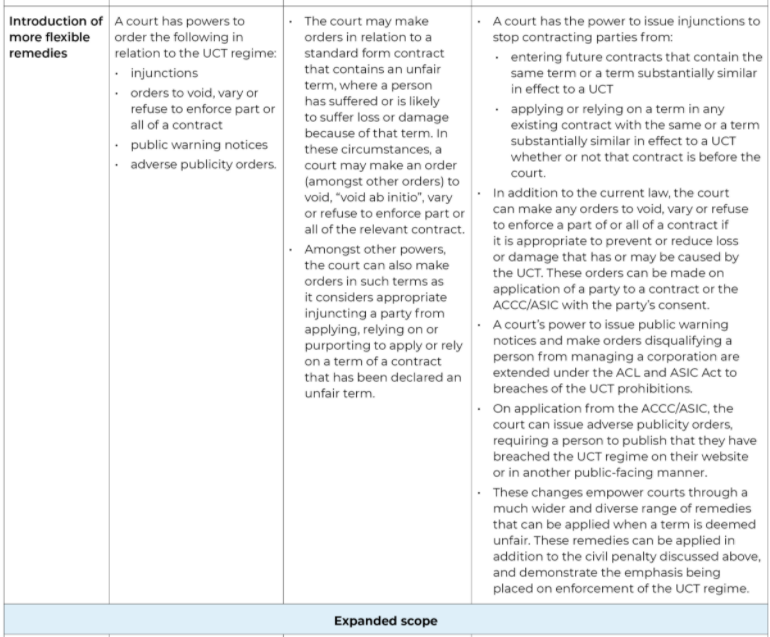 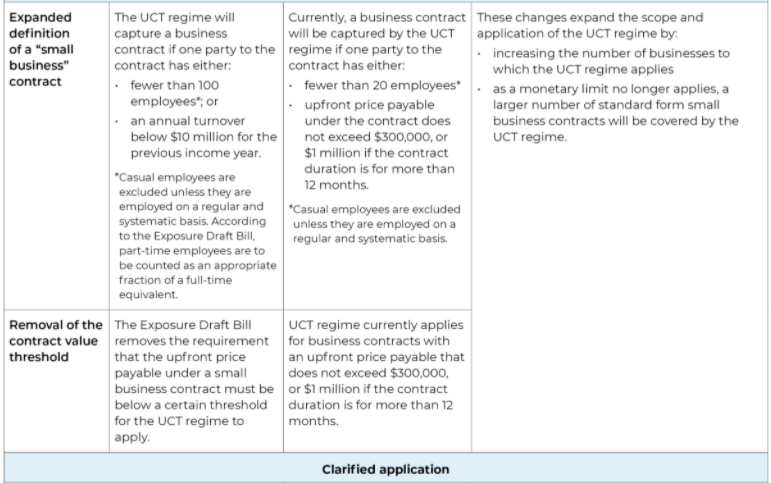 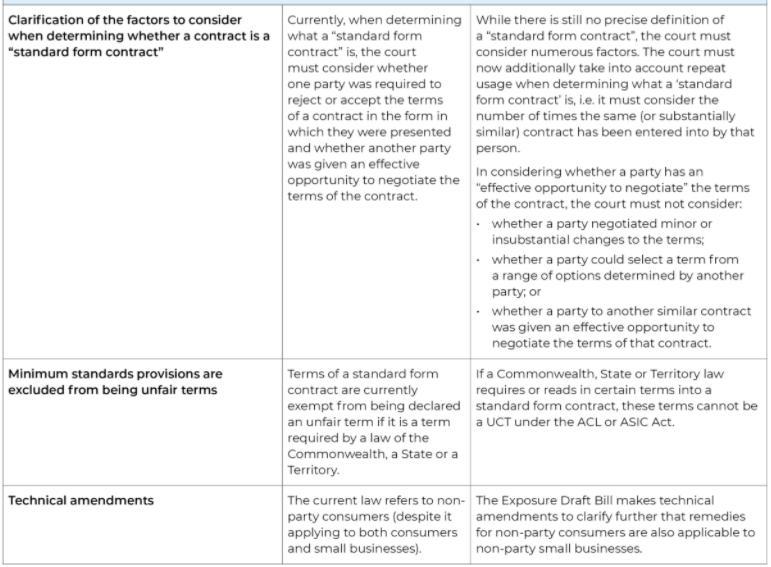 Public consultation on the Exposure Draft Bill closed on 20 September 2021.

While it is uncertain when these significant changes will come before Parliament, if passed, the Exposure Draft Bill provides that these changes will commence six months after the Bill receives royal assent (Commencement Date). The expanded UCT regime will apply to:

While the Bill is yet to be passed and does provide a six-month grace period, we suggest organisations start reviewing all standard form consumer and small business contracts that these changes may capture.

As we have discussed, if passed, the new regime will apply to a broader class of contracts and carry serious consequences if breached.

Additionally, it is anticipated that regulators, such as the ACCC and ASIC, will be keen to make an example of offending parties once these changes are in effect. For these reasons, organisations should prepare accordingly by reviewing all applicable contracts to assess compliance and to avoid potential penalties.

This can include reviewing documents such as standard terms and conditions of sale, loan agreements, order forms and rental agreements.

Furthermore, landlords should consider the impact the UCT regime has on its negotiation process. Given it is common for commercial and retail landlords to adopt standard leasing terms to provide efficient negotiation and consistency across centres, a prudent landlord should:

Subject to the quantity and complexity of an organisation’s contracting practices and procedures, reviewing standard documents can often be a timely and complex task, so it is prudent to start sooner rather than later. While the Bill is yet to come before Parliament, the changes have previously received bipartisan support from Commonwealth, state and territory consumer ministers and are expected to proceed.