Lawsuit against LEGO for copyright infringement

Are individual elements on a piece of clothing protectable owing to their “unique placement, coordination, and arrangement”?

LEGO has developed many branded sets over the decades, including sets inspired from popular series and movies such as Star Wars, Friends, Seinfeld, Home Alone and Harry Potter. However, its recently released “Queer Eye – The Fab 5 Loft” set based on Netflix’s Queer Eye series, has led to a copyright infringement lawsuit.

American artist James Concannon has initiated a copyright infringement action against LEGO for its alleged unauthorized copying and commercial exploitation of his work the “Concannon Jacket”. This action, which had been brought in December 2021 raises intriguing questions regarding the scale of protection of individual elements on a piece of clothing owing to their “unique placement, coordination, and arrangement”.

The two articles have been juxtaposed in the table given below for ease of reference: 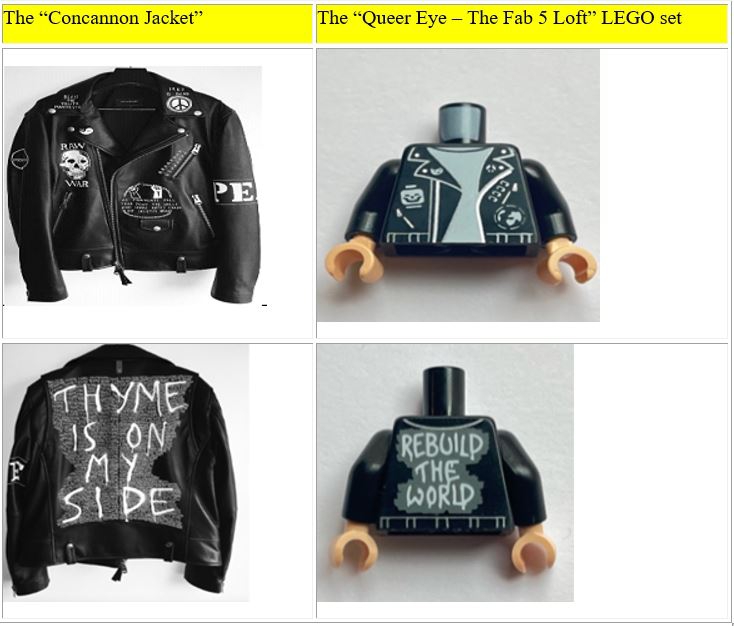 In addition to the above, Mr. Concannon had later also filed an amended complaint, inter alia, adding a claim of trade-dress infringement as well.

The legal battle ahead

It is pertinent to note that the US Copyright Law does not protect a useful article in its entirety, rather, just the separable creative elements. Therefore, in the present matter, the “Concannon Jacket” is in itself, not protectable, and only the individual creative elements that have been added to it may be copyrightable in respect of their “unique placement, coordination, and arrangement” as a whole.[ii]

Moreover, in the landmark case of Star Athletica, LLC v. Varsity Brands, Inc., 137 S. Ct. 1002 (2017), the Supreme Court of United States (SCOTUS), a very important principle recognized was that copyright law is 'medium agnostic'. The applicability of the same to the present case being that whether the jacket can be conceptualized as something not completely utilitarian. In the said landmark case, the apex court had held that an artist’s designs put on cheerleading uniforms were copyrightable, and that if such designs were to be severed from the uniforms and used in another medium (such as on a notebook or a sculpture or painting), then the same would become works of art.[1]

Further, the launch of the “Queer Eye – The Fab 5 Loft” LEGO set in September, 2021 predates the Copyright Registration No.VA0002276952 dated November, 2021 which Concannon holds for the “Concannon Jacket”. This may, in effect, adversely affect his chances of being awarded statutory damages and attorneys’ fees.

While the overall look and feel of LEGO’s miniature jacket may be reminiscent of Concannon’s work, many of the individual elements contained therein are prima facie different (although, opinions as such are subjective), and Concannon would not only have to establish their copyrightability, but also that LEGO has reproduced them with a substantial similarity. Nevertheless, this lawsuit may pave a way for negotiations and possible settlement between the parties.

Mode of protection of such works in India

Keeping the facts and circumstances of this case, the topic of what other forms of IP can be used to protect such clothing items, such as the iconic designer leather jacket made by James Concannon.

In India, protection can be sought under the below regimes –

From the perspective of the fashion industry, registration as a design under the Designs Act, 2000 would be the most appropriate mode of protection.

However, while a jacket like that of Mr. Concannon may be protectable under copyright, the same may be hit by 15(2) of the Copyright Act, 1957, which stipulates that Copyright in any design, which is capable of being registered under the Designs Act, 2000 (16 of 2000)] but which has not been so registered, shall cease as soon as any article to which the design has been applied has been reproduced more than fifty times by an industrial process by the owner of the copyright or, with his licence, by any other person.

In addition to the above, trademark is also a way of protecting the jacket in question, in India.

COGNIZANCE OF OFFENCES UNDER SECTION 63 OF COPYRIGHT ACT

This article was first published here