Understanding the Reasons for the Dramatic Increase in Airfares

Over the past six months, airfares have increased at a breakneck pace. The consumer price index for airline tickets increased by 63% from November 2021 to May 2022, the largest increase over a 6-month period by far since the index was created in 1989 by the Federal Reserve of St. Louis.[1] Fares are higher even when compared to pre-pandemic levels, with prices in June 2022 exceeding June 2019 prices by nearly 23%. This dramatic increase in prices is the result of shifts in several demand and supply forces, which came together to create a perfect storm. 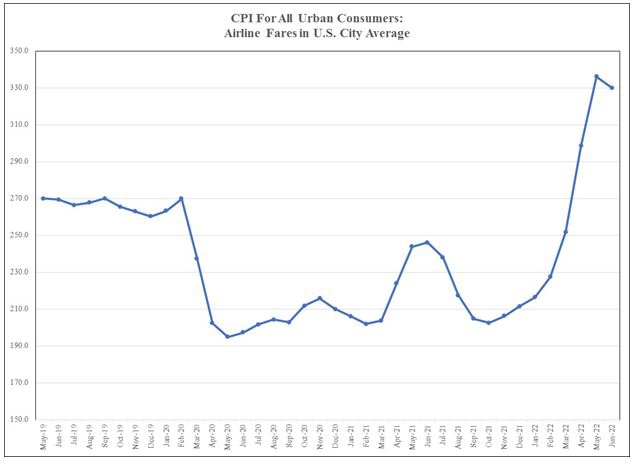 It's no surprise that as the pandemic, in its third year, has receded, there has been a resurgence in consumer demand for travel. One indicator of the domestic demand for air travel is the number of flights operated in the United States by the top 10 major carriers. In May 2022, the major carriers operated 590,957 flights – almost 87% of the figure for May 2019 (680,615), before the pandemic.[2] This healthy rebound in demand is even more apparent when compared to the mere 180,161 flights that were operated in May 2020, the lowest point for air travel during the pandemic.[3] 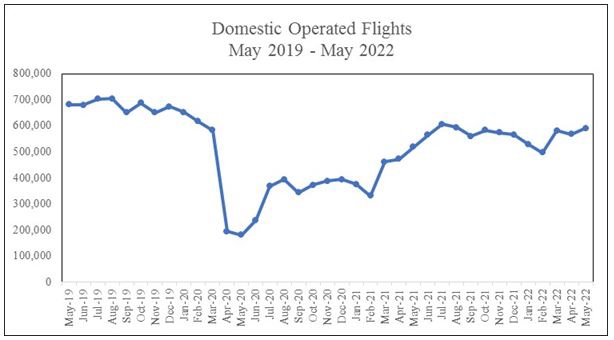 The drastic decline in demand during the worst days of the pandemic led airline companies to reduce headcounts, creating a labor shortage from which it has not been easy to recover. As of July 2020, just four months into the pandemic, 130,000 airline workers in the U.S. had been fired or furloughed.[4] This included thousands of older pilots who accepted early retirement packages.[5] At Delta, 17,000 employees took early retirement or buyout packages in August 2020 alone.[6] The pandemic also caused pilot training programs to be paused, reducing the number of new pilots who could take up the slack.[7] Due to the fact that training is expensive and time-consuming – it costs almost $100,000 per pilot and trainees are required to log 1,500 hours up in the air[8] – the supply of trained pilots cannot increase as fast as demand.

The pilot shortage has meant that the supply of air travel has not been able to meet the rapidly increasing demand, causing a surge in flight cancellations. In November 2021, only 0.63% of flight operations were canceled, while the figure increased to 6.2% in January 2022 and 4.4% in February 2022.[9] In just the first five months of 2022, there have already been more cancellations than in the entirety of 2019.[10] In addition, the pilot shortage, and the hiring of pilots from regional airlines by the larger carriers, have forced carriers to park hundreds of smaller 50- and 75-passenger regional jets.[11] Fewer regional jets, in turn, has meant cutbacks in the number of regional flights, further worsening the imbalance between supply and demand for air travel. 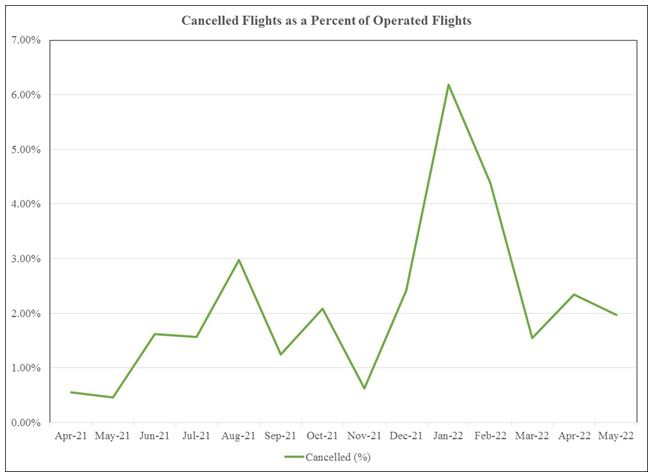 The largest carriers have scrambled to attract pilots with dramatic pay increases; American Airlines has offered pilots pay raises amounting to 17% over several years and United has offered 14% increases over 18 months.[12] Ultimately, the pilot shortage has created upward pressure on airfares through a supply reduction resulting from cancellations, flight schedule cutbacks, and increased operating costs. 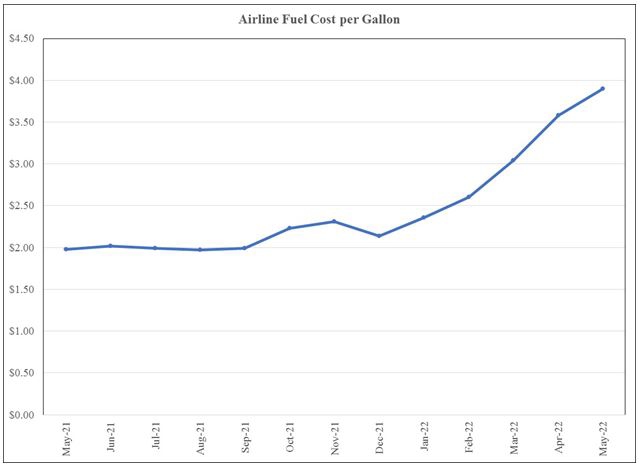 In response to the drop in demand caused by the pandemic, refineries shifted capacity away from jet fuels to other fuels, reducing the supply of jet fuel.[15] The problem was exacerbated by Russia’s invasion of Ukraine in February 2022, which led to a reduction in Russian crude oil exports. In Q1 2021, fuel accounted for 11.6% of the operating expenses of U.S. passenger airlines, but in Q1 2022, that share had increased to 19.5%.[16]

The outlook for airline ticket prices going into the fall of 2022 is tricky to forecast. The constantly-changing nature of the pandemic over the past couple of years has made the task of creating airfare prediction algorithms far more challenging than ever.[17] While demand is expected to cool in the fall of 2022 due to the impact of inflation on consumers’ discretionary spending and the typical seasonal decline, structural capacity constraints will continue to pull in the opposite direction. The number of pilot retirements at American Airlines, for example, is expected to continue to increase in each of the next three years, peaking above 800 in 2025.[18] Airfares did experience a downtick from May to June and at least one online booking platform forecasts a 25% decline in fares in August.[19] However, it is difficult to predict how airfares will respond to the current structural and geopolitical issues in the long run, resulting in continued unpredictability surrounding this important consumer travel expense.