Watch out, watch out - the Regulator's about

Sponsors must now, more than ever, ensure that they keep their defined benefit pension schemes at the forefront of their minds - particularly when embarking on corporate activity.

Protecting defined benefit pension schemes from sponsor failure or adverse restructuring is something the Government has been keen to prioritise. In its response to the Consultation on Protecting Defined Benefit Pension Schemes, the Government has set out proposals to increase pensions regulation and to improve the powers of the Pensions Regulator.

Two new criminal offences will be introduced. These will:

The notifiable events regime requires the employer or trustee of a pension scheme to give notice of certain events to the Pensions Regulator.

The Government's proposals include extending the current framework by requiring employers to notify the Pensions Regulator of:

There will be a new requirement for a Declaration which will need to be shared with the scheme trustees and the Pensions Regulator when certain corporate transactions are being contemplated. The Declaration will need to explain the transaction, confirm that the trustee board has been consulted and explain how any detriment to the scheme is to be mitigated.

Powers of the Pensions Regulator

The Government intends to introduce a new power for the Pensions Regulator to issue civil penalties of up to £1 million in a number of cases. The table below sets out some of the actions that the Government has identified will be subject to the new fines. 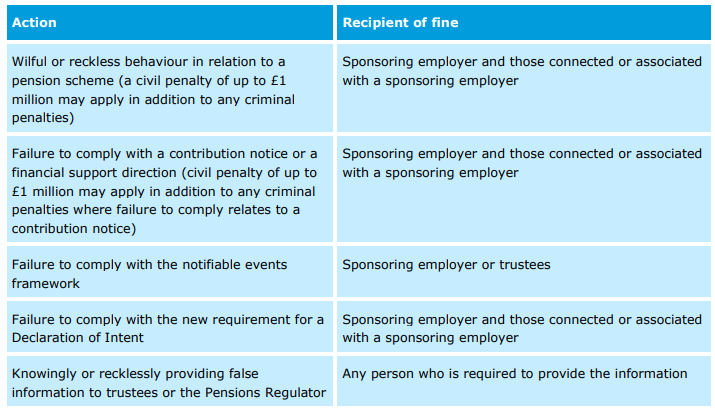 Changes have also been proposed to the Pensions Regulator's moral hazard powers. These include amending the reasonableness test for contribution notices and changing the tests for determining whether a financial support direction can be imposed.

The introduction of criminal liability as well as substantial fines shows a clear shift in the regulation of defined benefit pension schemes. The Government is clearly undertaking its policy that the failings in BHS and Carillion must not be allowed to happen again. We await the details of the Government's proposals – it almost goes without saying that this is an area that sponsors and trustees of defined benefit pension schemes need to watch closely.