Donor’s tax on waiver of inheritance: aAGlance at revenue memorandum Circular No. 94-2021

On 10 August 2021, the Bureau of Internal Revenue (“BIR”) released Revenue Memorandum Circular No. 94-2021 (“RMC No. 94-2021”) dated 21 July 2021 clarifying the computation of donor’s tax in cases where an heir waives or renounces his/her share of a specific property forming part of the estate of the decedent.

To recall, to implement the amendments under the Tax Reform for Acceleration and Inclusion Act (“TRAIN”) law relating to estate tax and donor’s tax, the BIR issued Revenue Regulation No. 12-2018 dated 25 January 2018. Section 12 of the said Revenue Regulation expressly provides that the “general renunciation by an heir, including the surviving spouse, of his/her share in the hereditary estate left by the decedent is not subject to donor’s tax, unless specifically and categorically done in favor of identified heir/s to the exclusion or disadvantage of the other co-heirs in the hereditary estate.”

While RMC No. 94-2021 recognizes the said rule that a general renunciation of inheritance is not subject to donor’s tax, the BIR, went on to explain that there are instances where, in the settlement of the estate, instead of all the heirs receiving their respective shares in all of the properties comprising the estate, the heirs will agree amongst themselves for a specific property that each one of them will receive. In this case, there will definitely be an heir who will receive a share lower or higher than the value of what should have been his rightful share in all the properties of the estate. Accordingly, it is the BIR’s pronouncement that donor’s tax will be imposed on the value foregone as a result of such waiver or renunciation.

To further clarify the BIR’s pronouncement, RMC No. 94-2021 provides an illustration of a scenario wherein the heirs of a decedent partially waive portions of their inheritance over specific properties, as follows:

Assuming Decedent A left the following properties to three legal heirs, namely, Heir X, Heir Y and Heir Z and at the time of the execution of the Extrajudicial Settlement of the Estate, the properties’ Fair Market Value (FMV) per Tax Declaration and Zonal Value (ZV) are as follows: 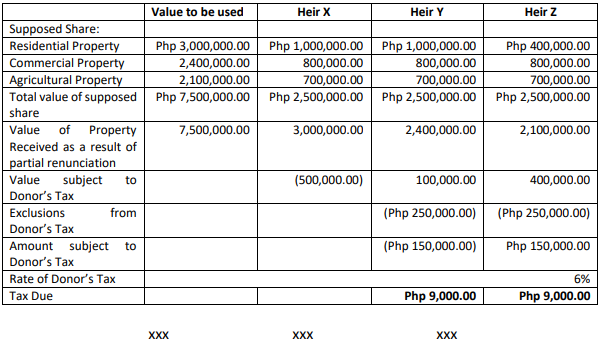 Based on the above scenario, donor’s tax would be imposed on any excess of the value of inheritance received by an heir that is more than his rightful share in the inheritance in cases where there is a partial and general renunciation. On the other hand, if the heir waives his entire inheritance in general terms (without specifying a particular heir or heirs to be benefitted), it may be argued that such renunciation should not be subject to donor’s tax consistent with Revenue Regulation No. 12-2018.

Notably, RMC No. 94-2021 is in stark contrast to the Commissioner of Internal Revenue’s (“CIR”) pronouncement in BIR Ruling [DA-053-06] dated 21 February 2006 wherein the CIR ruled that donor’s tax shall not accrue when all the heirs received a portion of the estate, albeit unequal. Similar to the illustration provided in RMC No. 94-2021, the decedent in BIR Ruling [DA-053-06] owned several real and personal properties and, instead of co-owning the real properties, each of the parcels of land were assigned to a specific heir with each heir waiving their shares in the parcels of land which were assigned to the other co-heirs.

In the said BIR Ruling, the CIR ruled that since all the heirs received a share in the estate and while the value of the properties received by each heir were not equal, the same cannot be interpreted as repudiation. The CIR explained that since the decedent’s estate mostly comprised of real property, it would be impossible, if not absurd, to expect that the properties distributed to each of the heirs would be of equal value. Thus, the heirs are not liable for donor’s tax.

On a final note, considering, that RMC No. 94-2021 does not expressly clarify what type of renunciation would still be covered by the donor’s tax exemption, there is a risk that in its implementation, RMC No. 94-2021 would be applied as imposing donor’s tax in cases where there is an unequal distribution of the estate among the heirs based on the value of the assets or if there is any such general renunciation, whether partial or full.