Is there Magic in those Mushrooms? Part 2 - Protecting New Psilocybin Derivatives.

As now widely recognized, the primary active ingredient found in magic mushrooms, psilocybin, has significant potential for treating many mental health disorders. Each week, articles are published on the potential benefits of psilocybin in the treatment of such disorders – for example, Nature recently published an article entitled, ‘How ecstasy and psilocybin are shaking up psychiatry” (Nature, Paul Tullis, January 27, 2021). In the next few years as the world shakes off the effects of the COVID-19 pandemic, there will likely be a surge of people seeking treatment for mental health conditions, including depression, anxiety and substance abuse. As such, there will be a significant amount of research into potential usefulness of psilocybin (and other psychedelics such as MDMA/ecstasy, mescaline). Companies will rush to develop new derivatives and formulations containing the active ingredient to finetune the biological activity of these powerful compounds.

In our previous article, we reviewed the different types of intellectual property available to protect innovations in the mushroom space. This article (and the one following) will provide a more detailed review of strategies for protecting chemical innovations related to magic mushrooms (or other psychedelics), and in particular, protecting new chemical derivatives of active compounds found in magic mushrooms.

Psilocybin, a compound found in many mushrooms, was first isolated and sold in the 1950s. Accordingly, it is a very old compound, and therefore, a person would no longer be able to patent the compound itself. Likewise, other psychedelics such as mescaline and ecstasy are well known, and the compounds themselves could not be patented. However, as chemists research different psilocybin derivatives to finetune the compounds’ biochemical properties, many companies will be interested in protecting those derivatives which may be patentable.

When a patent application is filed to protect a new compound (in this case, a derivative of a known compound), a patent examiner will search and review prior art in the field to determine whether the new compound is novel and inventive. The question of novelty is usually a straightforward question to answer – is the compound new, or in other words, has the structure of the compound ever been published or disclosed anywhere in the world. Such publications could include patents, journal articles, dissertations, conference presentation or abstracts, and even marketing materials. Generally, if the structure of the compound has been published, the compound is not new, and therefore does not meet the test for novelty. As an example, assume a company wanted to protect the following derivative of a known compound for the treatment of depression: 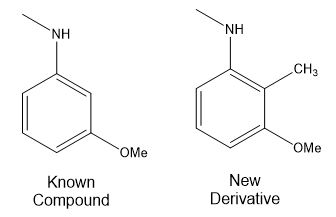 The question of the whether a compound is inventive can be more difficult to answer. Generally, the question that needs to be asked is whether this structure of the new compound would have been obvious to a person skilled in the art, based on all other known compounds. However, the inventiveness of a compound will not just be based on its chemical structure; the biological activity (or any potentially any other biochemical property) of the compound can also be determinative of whether a compound is inventive. If a new derivative has significant structural differences between it and known prior art compounds (generally limited to the same field), there will be good arguments that the new compound is inventive, even if the biological activity of the new derivative is comparable to that of prior art compounds. On the other hand, if a new derivative has a significant improvement or advantage in its biological activity compared to a prior art compound, then the structural differences need not be as pronounced. To demonstrate, let’s take the following new compounds which are derivatives of the example above: 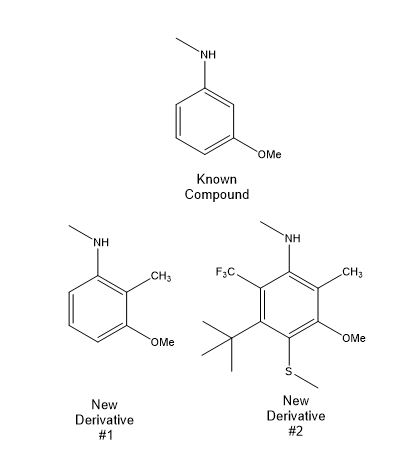 Determining whether a new derivative is novel and inventive is one of most important steps for a company to decide whether to seek patent protection for a potentially new compound. Understanding the prior art landscape before embarking upon a new research project is an important strategy for setting a company up for success.

In the next article, we will look at protecting new formulations comprising psilocybin, and other methods for delivery of the medicine. While the principles are the same, there are some important issues to consider when trying to protect these types of invention. In a future article, we will review issues concerning the licensing of such inventions.